US Open 2014: Kimiko Date-Krumm and Barbora Zahlavova Strycova are through to the last four in New York 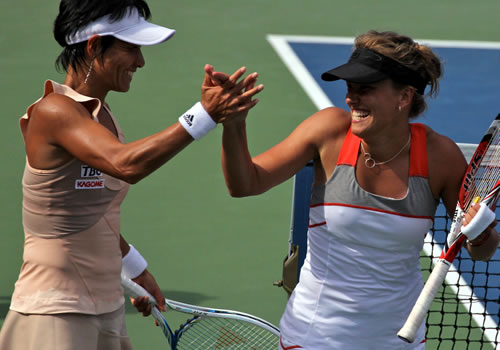 As it if were not enough that Serena Williams, who will be 33 in a fortnight’s time, is the oldest women’s No1 since WTA rankings began and is favourite to win a third straight US Open singles title, Williams continues to enjoy that other version of women’s tennis, the doubles kind.

She and sister Venus—the elder at 34 and a seven-times singles Grand Slam champion in her own right—have won 13 Major doubles titles, though this time around, they lost a little earlier than usual, in the quarter-finals.

But Williams is a long way from being the only 30-something playing both singles and doubles at this year’s US Open, and she and Venus are not even close to being the oldest.

That honour goes to the 43-year-old Kimiko Date-Krumm, one of 13 players over 30 in this year’s draw and, not for the first time in a Grand Slam, her path crossed that of the second-oldest—Venus.

Their very first meeting was just three years ago in a memorable match that was ‘forced’ upon the tennis world when it became the only one in play at Wimbledon, under the centre court roof due to torrential rain. But what an inspiring match it proved to be.

Date-Krumm played her first Wimbledon in 1989 before 36 of the players in that 2011 women’s draw were born. She reached the semi-finals at Wimbledon in 1996 and promptly retired from tennis at the end of that year having reached No4 in the world.

She returned to the tennis fray in 2008, and by the time she met Venus, they were not just separated by 10 years but by an eternity in playing style. The Japanese woman’s game is a throw back to the all-court tennis of serve-and-volley and chip-and-charge. In contrast, Williams plays the power game of the baseline era, able to load the ball with top-spin but with the ability also to rush the net and pick off the volley.

That first meeting lasted almost three hours in a 6-7(8), 6-3, 8-6 scoreline in Williams’ favour, and their third match, last year in Miami, also took three sets. And despite their advancing years, the two again put on a great show in the first round in New York, with the petite, wiry Date-Krumm taking the first set before Williams came back to take the win, 2-6, 6-3, 6-3.

But that was not it for Date-Krumm, who teamed up with Barbora Zahlavova Strycova in the doubles draw to reach her first ever Major doubles semi-finals, beating two pairs of seeds on the way.

Date-Krumm first made the quarter-finals of a Major in doubles back in 1992 at the Australian Open, so her run here delighted her and all those who looked on:
“I cannot believe it myself. [Post match] recovery is difficult at my age, but I’m enjoying every moment with Barbora.”

Zahlavova Strycova added:
“What can I say? To be playing at a level like this at 43… there isn’t a word for this. She’s amazing!”

Unfortunately, the fairytale for this year ended in defeat against the No4 seeds Ekaterina Makarova and Elena Vesnini, but the exuberance of the evergreen, sprightly Date-Krumm will surely keep her coming back to Grand Slam doubles competition—though let no-one forget, she has reached the singles semis in Monterrey and quarters in Birmingham this year, too!

The Date-Krumm story certainly captured the imagination at this year’s Open, but it is not the only one about mature comebacks and winning ways. At the other end of the women’s doubles draw, the team of 32-year-old Flavia Pennetta and a 34-year-old Martina Hingis have reached the final here, the Swiss woman’s first Grand Slam showpiece in over a decade.

Hingis became the youngest Grand Slam champion of the 20th century, age 16 and a quarter at the Australian Open in 1997, and soon after the youngest No1 at 16 and a half.

She would go on to win five Major singles and reach seven other finals, and hold the No1 ranking for 209 weeks—the target that Serena Williams has in her sights within the month.

Hingis even then, and at so young an age, was a prolific doubles champion, with 10 Major titles and 38 more WTA titles. But following ankle surgery in 2002, she struggled to make it back to the tour, missing most of 2003 and 2004.

However in 2005, she returned to win two more singles titles, one more doubles title and a first Grand Slam mixed doubles title, and working her way back to No6 in the world. Then in 2007, she was forced into retirement again with more injury. She was just 27.

What a pleasure, then, that she decided to return to the doubles tour last year, and that her new partnership with Pennetta is reaping such elegant rewards. They immediately reached the finals of Eastbourne, reached the quarters in Montreal, and this week, their smiles as much as their tennis have lit up New York too.

Pennetta is no stranger to doubles success, with 15 titles from 31 finals, but she is rapidly closing in on those numbers in singles, too—10 titles from 23 finals—and seemingly maturing with age like a fine wine. She reached the singles quarters here for the fifth time in six appearances, and made a career-best Major semi here last year.

And her chemistry with Hingis is clear off court as well as on. They bantered like sisters, laughing, joking, and charming their audience, in what is clearly a great friendship as well as partnership.

Pennetta explained the dynamic: “When I stopped playing with Gisela [Dulko in 2012], it was really difficult for me. It takes time to find the same feeling, trying to find the good one. And I think I found it… I trust [Martina] all the time… in the bad moments she’s there and it’s the same for her. We have fun outside the court—even on court we laugh a lot!”

“The most important thing is, you have to trust and rely on your partner and that’s what I feel for Flavia. She’s there when I’m down, when things don’t click, we are there for each other.”

A marriage—of sorts—made in heaven, it seems, rather like the sisterly pairing of the Venus and Serena, and the equally joy-packed interactions between Date-Krumm and whoever has the pleasure of sharing the court with her.

Age is proving, yet again, to be just a number, and so the last words go to Venus after her victory (just) over the Japanese woman:

“I was the younger one today, but when you step out on the court, I don’t think anybody thinks about age. Because if you’re on the tour, it means you deserve to be here. You’ve got the skill and you know how to play.

“According to Kimiko, I have another decade. She set the prime example. She’s top 100 and no one can beat her easily… She’s breaking the mould.”