US Open 2014: This could prove to be a memorable autumn for Novak Djokovic - in more ways than one 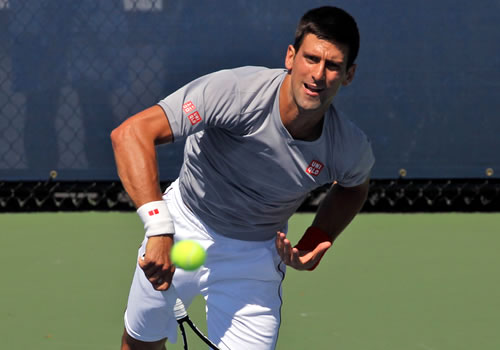 For a man who has reached the last four finals of the US Open, who won the title in 2011, who has not fallen short of the semi-finals in New York since 2006, who was runner-up here when he was just 20 years old, and arrives this year not only as the Wimbledon champion but as the world No1, Novak Djokovic has managed to keep what has, by US Open standards, been a pretty low profile at Flushing Meadows.

It is all the more surprising in the light of his 2014 season. Djokovic put together a stunning spring and summer, following a semi finish in Dubai with back-to-back Indian Wells/Miami Masters, the semis in Monte Carlo, the title in Rome, and the final of Roland Garros. He then made a resilient run to the Wimbledon title that demanded 14 sets—five of them tie-breakers—to survive the quarters, semis and final.

But on his return to the tour in August, he lost in the third round of the Toronto Masters—where he had three times been the champion—and then did the same in Cincinnati, where he was aiming to become the first man to complete the set of Masters titles.

Perhaps this dip in the form of the seven-time Grand Slam champion was the inevitable consequence of how much he had put into the first half of the season, but the Serb has certainly not found the kind of sparkling preparation on the road to the final Major of 2014 that the tennis world has come to expect from this most athletic and clear-thinking player.

Woven into this tapestry of victories and losses, though, has been a personal thread that became the focus of almost every conversation with and about Djokovic since the start of the North American hard-court season.

The Serb married his long-term fiancee shortly after Wimbledon and she is expecting their first child in the near future. Already at Wimbledon, he was being asked whether he had sought advice from father-of-four Roger Federer about managing the tennis merry-go-round with his new status as a family man.

He was amiable about the interest in his personal life, and has remained so, but the questions have become more frequent and, with his truncated runs in Toronto and Cincinnati, there is now another undercurrent to the enquiries: Perhaps the emotional toll of marriage and awaiting the birth of a first child has been behind his slip in form. He was asked in his first press conference at Flushing Meadows if, with a new child, he thought he would be able to “focus on his tennis as ruthlessly”:

“Well, that’s a question I cannot give you answer to because I’m going to find out. I’m going to see how that feels. Obviously I talk with people who are around me who have children. As I said before, my coach and other people have been in similar situations like I am—and how they dealt with that, how that has affected their careers, their mindset, their overall life. I with no doubt have only positive and joyful feelings approaching fatherhood, and hopefully, it’s going to happen in less than two months. Then I’m going to enjoy it and try to take as much energy as I can, positive energy to kind of transfer that to the tennis court. But without a doubt, life changes. You know, priorities change: My priorities, my family, my wife, my future kid. You know, tennis is definitely not No1 anymore.”

The curiosity has stretched its tentacles to other players: Federer, too, has been asked more than once since arriving here about Djokovic’s ‘circumstances’, and offered only positives.

“We could go into this like endless talk of how I did it, which worked and which didn’t work. I have spoken to him a little bit in the past. It’s normal I think when you’re entering the whole family thing that [with] many people, all you talk about is babies and how to prepare for it mentally…

“I think he must be quite excited about what’s going to happen soon. And with the wedding and everything, I’m sure he’s going through a great spell at the moment with winning Wimbledon, top of it, so things are great for him. But I think he’s got to figure it out himself really… But the good thing, he sees me with four, so with one should be a piece of cake!”

Federer was pressed again after his first match about whether Djokovic’s personal life may have been affecting his tennis, and gave short shrift:

“Did he say it makes him struggle? I don’t remember hearing him say he didn’t play so well the last few weeks because of that. I don’t think that’s the case. I just think he didn’t have the best days and the opponents played well.”

[Question: Maybe under the surface?] “Maybe. But now we’re starting rumours and we don’t want to do that. I think he’s going to be totally fine here unless his wife is really not doing well, which he would never tell us anyway. I really hope that’s not the case. I expect Novak to be in great shape.”

Djokovic certainly proved Federer’s prediction right. He sailed through his opening match, 6-1, 6-2, 6-4, in an hour and a half. And there has been no doubting Djokovic’s own ambition and self-belief. He admitted that the two August Masters had been “a bit tough emotionally for me”, before adding: “But it’s all normal. It’s something that I’m experiencing for the first time, right?”

And he went on to refute the suggestion that it affected his expectations: “No, it doesn’t.

“I have high expectations for myself. I always have. Especially at this stage of my career where I feel like now is the time that I’m at my peak physical strength. I want to use this time of my career as much as I can to win as many matches as possible. Obviously I know I’m not the only one that has this kind of mindset, optimistic mindset. There are many players who are fighting for the same trophy.

“This is the last Grand Slam of the year, and this is where you want to play your best. This is where all the attention of the tennis and sports world comes to. It’s going to be a long two weeks’ journey for all of us, but I was getting ready for it and looking forward to it.”

It was a windy Arthur Ashe, but proved little trouble to the Serb who put in an effortless performance. His first serve hit its target 75 per cent of the time, he fired 13 aces, and dropped just one point on serve in the third set of a 6-1, 6-3, 6-0 rout in under an hour and a half.

He put the ease of his win down to “using my serve efficiently and accurately rather than with speed”, but his was a complete performance of 33 winners to just 16 errors—and he capped it with a short musical shimmy for the cheering crowds afterwards.

While Djokovic’s draw is a tough one in the second week—John Isner looms in the fourth round, Andy Murray in the quarters and Stan Wawrinka in the semis—this opening week is providing just the confidence-boost that the Serb needs to fine-tune his rhythm and resilience. And contrary to what those outside the locker-room think, Federer believes Djokovic may be ready to hit his peak: “If I look back in 2009 when I won the French Open [and] Wimbledon, my wife was pregnant, and it inspired me to great performances.

“I believe it’s rather an advantage than a disadvantage in my opinion.”

This could prove to be a memorable autumn for Djokovic—in more ways than one.