US Open 2014: Age certainly shows no sign of withering many of tennis' hardened campaigners at Flushing Meadows 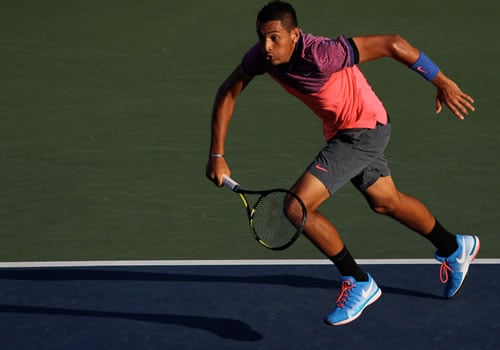 If one match summed up the span between youth and experience in the first week of the US Open, it came in the second round between two men whose experience of Grand Slams was, to be generous, on the thin side.

The youngest man in the main draw, 17-year-old Borna Coric, was last year’s US Open junior champion but had won just a single match at senior Grand Slam level—in the first round here, in his first ever Major, and he scored it against the No29 seed Lukas Rosol.

The oldest remaining man, Victor Estrella Burgos, was, at 34, twice Coric’s age but also owned just one win from only three Grand Slam appearances, also from his first match at Flushing this week.

The 17-year age difference between Estrella and Coric was the biggest in the tournament’s Open era history, to there was, not surprisingly, a lot of interest in the outcome. And it proved to be the elder man who seized the day, 7-6(2), 4-6, 6-4, 6-2, to take another new step in his long career.

His comments afterwards made it very clear what the victory meant: “I had a lot of emotions while serving for the match. I cannot believe that I’m in this situation. I was going to make the third round of the US Open. I was a little nervous, and it was very, very emotional for me. Thank God I got the point. After that, I got more [teary-eyed].”

Estrella made history in March by becoming the first player from the Dominican Republic to enter the top 100 and that led to a direct acceptance into the French Open main draw, the first Dominican to compete in a Grand Slam. Now he is guaranteed to rise past his career-high No79 ranking, too.

On the very same day, at the very same time, on the very next court, another teenager, 19-year-old Nick Kyrgios, was also bidding for the third round against an older campaigner, the 30-year-old Andreas Seppi—ranked 49 though he was No18 last year. For a lucky few 100 spectators in the new stands that span Courts 5 and 6, it was a treat of the highest order: two young men pitted against two experienced players, and it brought the deepest intensity from all four men.

Kyrgios was already a known talent having made a breakthrough run in the most high-profile manner at Wimbledon, reaching the quarter-finals by beating both Rafael Nadal and Richard Gasquet.

And that same easy but explosive power from the 6ft 4in Australian was reaping the same rewards. He beat Seppi in straight sets having already beaten No21 seed Mikhail Youzhny in the first round. 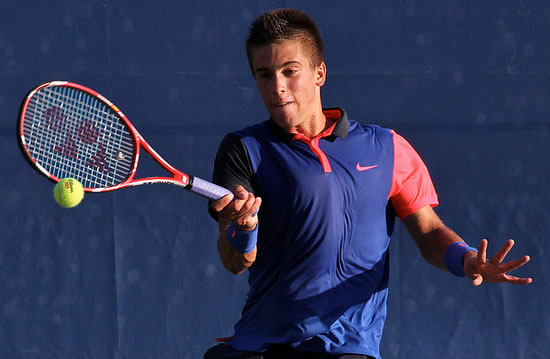 As luck would have it, both Kyrgios and Estrella Burgos would again play men they differed in age by more than a decade.

Kyrgios took on an evergreen competitor who has returned to the upper ranks after injury and surgery interrupted a fine career. Tommy Robredo, one of numerous 32-year-old Spaniards who have also advanced to the third round—Feliciano Lopez and David Ferrer join him—scored his first ever win over Federer to reach the quarter-finals here last year. And not for the first time, he came back from two sets down to beat Simone Bolelli.

Robredo made headlines and broke records at the French Open last year by doing the same thing three times in a row, and he scored an extra landmark with his first win this week: His 100th Grand Slam match win and the third active player to win 200 matches on both hard and clay courts.

Separated by 13 years in age and experience, the elegant single-handed Spaniard against the tall and explosive firepower of the Australian promised variety, intrigue and a big crowd in the biggest stadium of all, Arthur Ashe. And to give some context to what Krygios was attempting, a teenager has not made the fourth round in New York since Juan Martin del Potro did so in 2008—and the Argentine would go on to win the title the next year.

As for Estrella, matters were about to get much tougher. He took on the leading man in the new chasing pack, Milos Raonic, one of five 23-year-olds into the third round, and the first to break into the top 10.

The Canadian with the fearsome serve—he is third on the tour this year with 752 aces so far—is in the midst of a ground-breaking season. He won his first 500 event in Washington and reached his first Major semi at Wimbledon after a quarter-final run at Roland Garros. Despite an ankle injury at the start of the year, he reached No6 in the rankings, and is seeded at a career-high in a Major of No5. 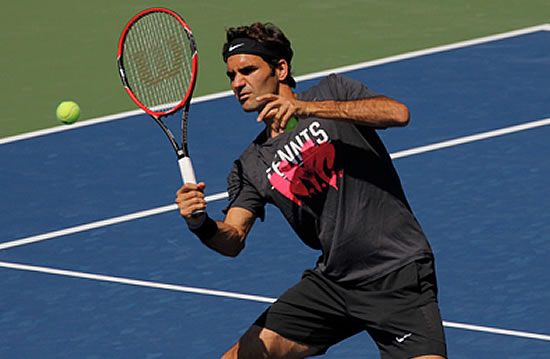 Not just separated by 11 years, though, Raonic towered over Estrella by 23cm and had even won their only previous match, a Davis Cup encounter when Raonic was still a teenager—but it took a 9-7 fifth set to do so.

No wonder that the popular and intimate Grandstand stadium was already close to capacity half an hour before play began on this holiday Saturday schedule.

Come Sunday, Lopez, who put together a storming summer on grass with the title in Eastbourne and a final finish at Queen’s, would take on the latest teenager to emerge from the ranks. Now 20, Dominic Thiem is the youngest player in the top 50 having started 2014 at No139. He reached his first final in Kitzbuhel and beat friend and No11 seed Ernests Gulbis here to reach his first Grand Slam third-round.

And in a throw-back to Lopez’s generation, he commands an outstanding single-handed backhand: It will be a battle between attacking left-hander and right-hander.

The youngest man in the top 10—and arguably the one tipped for the top most consistently—is 23-year-old Grigor Dimitrov, who reached the semis at Wimbledon and has now won a match in New York for the first time in three attempts. He will play fellow 23-year-old David Goffin—who suddenly this summer cannot stop winning. After Wimbledon, he won three Challengers back to back, followed by the Kitzbuhel title.

The 1990s generation in the New York draw is made up by Andrey Kuznetsov and Pablo Carreno Busta.

Rounding out the over-30s is No22 Kohlschreiber who, against remarkable odds, plays John Isner in the third round of the US Open for the third consecutive year.

But then, just as in the women’s draw, the highest profile player among the over-30s is No2 seed and five-time former champion, Federer. The Swiss turned 33 this month—just a few weeks older than his opposite number Serena Williams.

And just like her, his campaign for an 18th Grand Slam has begun in fine style, with two straightforward wins. Until Friday night, it was on the cards that his third match might unite him with the oldest remaining man in the draw, 35-year-old No25 seed Ivo Karlovic, but the Croat lost out to Marcel Granollers—though not before taking the Spaniard to five sets and almost four hours.

Age certainly shows no sign of withering many of these hardened campaigners—and that promises the pleasure of ever-more contests across the generations.

UPDATED AT 20:53 UK: It turned into an exhilarating contest of three tie-breaks, with Estrella breaking back not once but twice in the second set, and serving for the match at 5-4 in the second. He hustled and bustled, firing wonderful backhand cross-court winners and even making a lob winner over his huge opponent, but he could not hold back the powerful Canadian tide of forehands and 22 aces—but it deserved and got a standing ovation.”

Part one: From Venus to Belinda to Mirjana – spanning the generations