US Open 2014: When it comes to the women's tour, age is just a number, writes Marianne Bevis 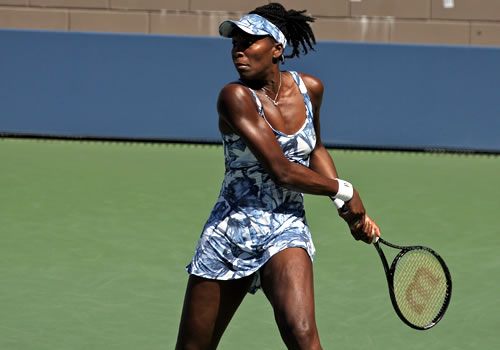 The early afternoon schedule at Flushing Meadows illustrated the point perfectly. Age has been no barrier to making an impression at the final Grand Slam of the year.

Go to Louis Armstrong for the first match of the day, and there was Roberta Vinci, 31-years old, and trying to reach the fourth round for the third year in a row: She had been a quarter-finalist here in the last two years, her best Grand Slam result since she first played a Major in 2001.

Check out Armstrong, and 32-year-old Mirjana Lucic-Baroni was taking on one of the form players of the last 18 months, No2 seed Simona Halep. The tall Croat last reached the third round here in 1998 and had lost in the first round of her last four Majors.

Second on in the boiling cauldron of Court 17 was one of the fastest rising stars of the women’s tour, appropriately the 17-year-old Swiss, Belinda Bencic, who took on the No7 seed Angelique Kerber.

This teenager may not have had the pulling power in New York that the latest sensation, 15-year-old Cici Bellis, had in filling this same court late last night—though she was beaten by the impressive 20-year-old Zarina Diyas in three sets—but Bencic didn’t do a bad job.

The Swiss is the youngest woman in the top 100 and second only to Bellis in the US draw, where she is playing at a career-high ranking of 58. But taking out Kerber, 6-1, 7-5—pulling back from a 1-4 deficit in the second set—in her New York debut will rate as her best result so far, and her first Grand Slam fourth round.

The style of her victory was just as impressive: 23 winners to 18 errors, and 11 points won at the net. Does a quarter-final beckon for the only teenager left in the draw? She has another mountain of a task in Jelena Jankovic to do so, but it is certainly not out of the question—and that would be some achievement just a year after she was Junior Champion at Roland Garros and Wimbledon.

Meanwhile, on Court 13, the oldest woman in any draw in New York this year, the remarkable 43-year-old Kimiko Date-Krumm, was playing in the second round of the women’s doubles, and swiftly advanced to the third round with Barbora Zahlavovo Strycova.

The Japanese woman—as has become the custom when playing the second oldest woman in the draw, Venus Williams—also took the 2000 and 2001 champion to three sets before losing in the opening round of the singles draw.

And what of Williams herself, 34 years old, back in the top 20 following a runner-up finish in Montreal—where she beat sister Serena—and playing in her 16th US Open? It was here, three years ago, that Venus pulled out of the draw with Sjogren’s Syndrome, and she continues to manage the condition.

Yet this season she has been playing some of her best tennis in years to reach multiple finals for the first time since 2010, and Dubai marked the 45th title of her career.

She was now in the third round at her home Slam for the first time since 2010, but had to beat the feisty No13 seed Sara Errani to advance, and the petite Italian took complete control of a first set that saw the American spray 18 errors and make only three winners. Errani led, 6-0, in 26 minutes.

But Williams is not a seven-time Grand Slam champion for nothing, and she hit back with formidable power and aggression to race to a 6-0 set, courtesy of 14 winners and only eight errors. Her New York fans—and many more besides—could barely contain their excitement.

The third act of this see-sawing drama had both women playing at maximum intensity that produced quite stunning rallies played to the soundtrack of groans of effort on both sides.

The crowd, though partisan, was still vocal in its appreciation of Errani’s efforts—and deservedly so. The two women exchanged breaks three times to finally decide the outcome in a tie-break, and it was perhaps the doubles-honed net skills of the small Italian that made the difference. She came off the better in the last two exchanges to score a passionate victory, 7-6(5).

But the prize for most passionate, most exuberant, most heart-warming victory would belong to Lucic-Baroni.

Hers has been a remarkable story of persistence, courage and desire against the odds. Blessed with precocious talent, she won the first WTA tournament she played at 15 and then the Australian Open doubles title on her debut, also at 15. She reached the Wimbledon semis at 17 but was then knocked back by repeated injuries and personal struggles that saw her play hardly a tournament between 2000 and 2009.

Then began a gradual climb back up the rankings, playing the ITF circuit and qualies. That was her route into the main draw here, and she grabbed her chance with both hands. From 5-2 and set points down in the first set against Halep, Lucic-Baroni went for the lines, playing some outstanding aggressive tennis to force a tie-break, and she never looked back, taking the match 7-6(6), 6-2.

So for only the second time in her career she has reached the second week of a Major, 15 years after the first. And if you could bottle her emotions afterwards, you could retire a rich person.

“I feel goofy right now. I feel like I’m 15 now. I feel so excited. It’s crazy. I’’m 32, but I don’t feel like that. My body is really great. I feel fit. I feel strong in my mind. I feel very excited, even after so many years on tour.

“I have such an amazing husband and such a happy life at home that I don’t need to do this. I would be perfectly fine having a family. But people don’t realise how much I want this and how hard I worked for this… It’s just so fulfilling, so amazing.”

She was asked about the 15-year-old Bellis just starting out on her own career at the same age.

“I was watching her last night. Still you’re watching a little kid, and for me it was just so normal when I was 15 playing here. I actually needed a wildcard. I was 15 in the world and I needed a wildcard because of the rules… Yeah, you’re just such a little kid. You don’t know what’s happening. I was feeling like an adult at 15 when I played here, but she’s just a little girl. It’s amazing. Amazing thing to do.”

At one point the memories, and her joy at what she had achieved today, reduced Lucic-Baroni to tears—and very nearly the watching media, too. But as far as she is concerned, this is just the start of the next phase of her career. Will she be around when Bencic and Bellis are her age?

“I feel good about the fact I’m 32 and I’m still here. After so many matches I feel fit. I feel strong. I still have a few years to catch up to Kimiko, so I’m good… Best day of my life. Yeah, definitely.”

And tomorrow, of course, another 32-year-old, defending champion Serena Williams—the oldest woman in the Open era to claim the No1 ranking—will continue her campaign for US Open title No6 and Grand Slam No18. She has dropped only five games thus far.

The aspiring teens making their first mark in New York are also learning that, when it comes to women and tennis, age is just number.