US Open 2014: Grigor Dimitrov is expecting a tough test against Gael Monfils in the fourth round in New York 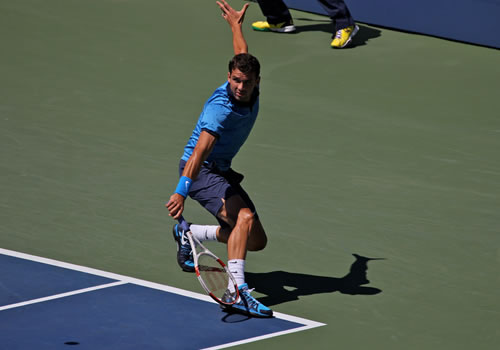 Grigor Dimitrov is expecting a tough test of his US Open credentials when he takes on Gael Monfils in the fourth round in New York.

The Bulgarian seventh seed dropped the first set before sealing a 0-6 6-3 6-4 6-1 over David Goffin in the last 32 at Flushing Meadows.

Meanwhile, Monfils progressed thanks to a straight-sets win over fellow Frenchman Richard Gasquet.

And Dimitrov, who is through to the last 16 for the third time at a Grand Slam this year, is ready to a tough test.

“We all know Gaël,” said Dimitrov, 23. “When he’s at his best, it’s tough to play. I respect him. I played I think a few times against him. I think it’s going to be a good match-up for me.

“It’s a great stage to be in, second week of a Slam. This is where it all enters and you’re starting to see what’s been happening.

“So I love that part of it. I must say, it’s my third or fourth Slam that I’m into that second week. Every time I come to play Monday or Tuesday the following week, it’s a different feeling, it’s a different state of mind. You kind of get out there and try to give your best.

“I think also the court you’re going to play on, the crowd, the tournament itself will lift you up even more. It’s inevitable for you to play good tennis.”

Elsewhere, Dominic Thiem caused an upset when he overcame 19th seed Feliciano Lopez in straight sets to reach the fourth round.