US Open 2014: Great Britain's James Ward loses in the final round of qualifying to Moldova's Radu Albot 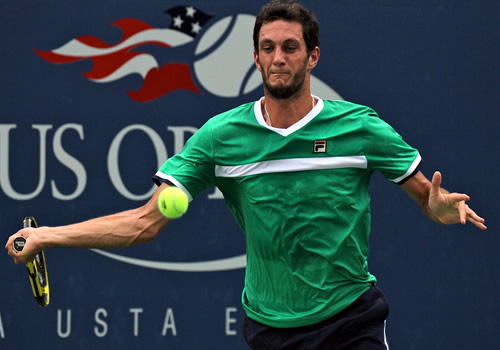 James Ward lost in the final round of qualifying Photo: Marianne Bevis

James Ward, seeded 15 in the US Open’s qualifying tournament, fell one win short of reaching the main draw at Flushing Meadows for the first time in his career.

Ward, the only Briton among the five in both qualifying draws to reach beyond the first round, lost to Moldova’s Radu Albot, 6-1, 3-6, 6-2, in a seesawing match that was evenly balanced at the start of the third set when rain visited the US Open even earlier than usual late on Friday afternoon.

It is doubly disappointing for Ward, who also lost in three sets in the final stages of qualifying last year. He has made strides this season to rise from 172 at the start of the year to his current 131, the second-ranked Briton behind Andy Murray, but his best Grand Slam performance remains a Round 2 finish at Wimbledon in 2012.

Ward started poorly, broken in the second game, though rallied to hold to love in the fourth for 1-3. But he was outplayed by Albot for most of the set, was broken again in the sixth, and smashed his racket on the court in frustration as the first set slipped away.

He then took a medical time-out for treatment to the ball of his right foot, and that seemed to do the trick as he came back strongly in the second set with some more consistent and powerful baseline hitting. He broke to take a 4-2 lead and served it out at 6-3.

But the skies were already dark with ominous cloud, and sure enough, the rain arrived with just one game on the board in the third. And when the players returned in a cooler early evening, Ward managed just one more game as Albot, ranked 205, advanced to reach his first ever Grand Slam main draw match.

There are now just three Britons in contention in New York.

On the men’s side, Murray has a tricky opener against Robin Haase.

In the women’s draw, Heather Watson, who has jumped from 113 at the start of the 2014 to a current 45 after a strong run at the Rogers Cup in Montreal, faces Sorana Cirstea, who she has beaten in both previous meetings.

Johanna Konta, who reached a career-high 89 last month, has slipped back to 120, but faces a beatable first opponent in the 155-ranked Shahar Peer.

Dan Evans, who made such a striking run to the third round here last year, beating Kei Nishikori along the way, will now be facing a big slip in the rankings, back outside the top 200. The other losers were Naomi Broady, Daniel Cox and Daniel Smethurst.