US Open 2014: Philipp Kohlschreiber and Tommy Robredo are both through to the fourth round in New York 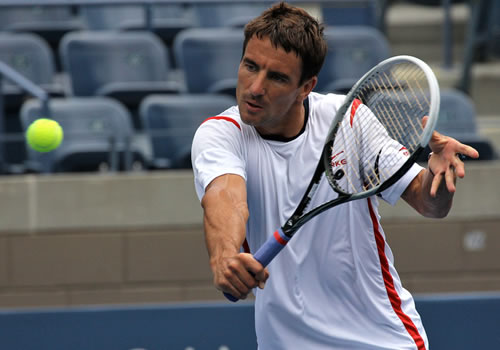 Tommy Robredo is through to round four Photo: Marianne Bevis

A huge groan of disappointment murmured around the grounds of the US Open at the announcement, late on Saturday afternoon.

The No3 seed Stan Wawrinka—one of only two reigning Grand Slam champions and one of only four reigning Masters champions in the draw—would not be making his scheduled appearance on Armstrong. His opponent Blaz Kavcic had withdrawn with injury.

But in truth, for those with seats on the tournament’s second arena, it had not been a bad day’s entertainment, and the concluding match featured the top American, No13 seed John Isner, against a man who has become his nemesis, the perhaps unlikely package of No22 seed Philipp Kohlschreiber.

Unlikely because the elegant 30-year-old German does not have one outstanding weapon like the 6ft 10in serving machine that is Isner. The American would fire 42 aces, topping 140mph, past a Kohlschreiber who stands a foot shorter.

Understandably, too, the German did not have the support of a partisan crowd desperate for a man to revive its past glories—and the current glories of two Williams.

All in all, it was an uphill task for the German, and what’s more, it was one that faced him for the third time in the third round for the third consecutive year at Flushing Meadows. On the last two occasions, Kohlschreiber had found the key to Isner. Since then, Isner had snatched a victory in Auckland—remarkably in three tie-breaks. Indeed all their ATP tour matches had gone to three sets. Could Kohlschreiber make it three out of three in New York?

Well, yes he could, with the kind of nimble, tactical, clean-hitting tennis that few men can produce as well as the German when everything clicks into place. For while Isner has got the better of the likes of Novak Djokovic on hot hard courts, the German is a match-up that challenges him in a wholly different way.

Kohlschreiber’s single-handed backhand in particular is a devastating weapon, sliced cross-court from the baseline, chipped short over the net, feathered across the tape at close quarters to test the mobility of the American whose biggest challenge is getting low enough to make any kind of return. The German made 12 outright winners on that wing and countless more tactical winners. For his part, Isner made not a single winner off his backhand.

But that is to underplay the smartness of Kohlschreiber’s all-round game. He has a kick serve out wide and a flat serve down the middle, so can open up the court or wrong-foot the big man. The German hit a nifty 13 aces of his own, but his ability to move in for the kill is just as devastating—he made 33 points out of 45 ventures to the forecourt.

In short, while Isner had the power, the serve, a new willingness to come forward—and the crowd—Kohlschreiber had movement, speed, flexibility, and variety in shot-choice and execution. After more than three hours, Isner would see one more backhand fire out of reach down the line for that vital point in the fourth-set tie-break. His opponent took the win once more, 7-6(4), 4-6, 7-6(2), 7-6(4), the only time Isner has lost three tie-breaks in one match.

The last time Kohlschreiber met his next opponent on hard courts four years ago, it also ended with a final-set tie-breaker. It was Djokovic, and the top seed poses an entirely different challenge. For a start, his movement, speed and variety of shot are the equal of Kohlschreiber’s.

The German recognised his ill-fortune: “Last year, I played John and then faced [Rafael] Nadal, who was No1 in the world. It’s great to still be in the tournament, playing on the big courts. I really enjoy it. Well, he’s the guy to beat in this tournament. I’ll try to give my best shot. We played in Rome this year—I lost in three sets. I know if I play my best I have a good shot. On the other hand, who knows what’s in two days?”

A very similar story unfolded well into the night on Arthur Ashe after many of those earlier disappointed fans had headed off to enjoy the last official weekend of summer in the Big Apple. And they missed a treat.

Instead of a headline American, the tall slim man on one side of the net was one of the new stars on the tennis stage, teenage sensation Nick Kyrgios. He had reached the quarters at his first Wimbledon via Richard Gasquet and Nadal, and had reached the third round here with wins over No21 seed Mikhail Youzhny and Andreas Seppi.

He faced a man 13 years his senior, 32-year-old No16 seed Tommy Robredo, who has returned to the upper ranks after injury and surgery interrupted a career that had taken him to No5 in the world and 12 titles.

Robredo’s main claim to fame in New York, though, was his first ever win over Roger Federer to reach the quarter-finals here last year. His other claim to fame has been the kind of fighting spirit to win what seem to be lost causes.

At last year’s French Open, he came back from two sets down in three consecutive matches to reach the quarter-finals, and he did the same in his second-round match here against Simone Bolelli.

Just as in the Isner-Kohlschreiber match, this contest again promised a contrast in style and tactics. Kyrgios hit 20 aces, topping out at 137mph, and used his deceptively easy power to pound the elegant game of the Spaniard off the court.

The young Australian raced to a 5-0 lead and although Robredo finally got on the board, the set was Kyrgios’, 6-3, in 27mins.

It went on: Kyrgios pounded two backhands down the line to break in the opening game of the second set, and then hit four aces to take a 2-0 lead.

But now the experience and court-craft of Robredo found a way to counter Kyrgios, and won three straight games. Able to swing the ball from one side to the other, slice and chip, attack and defend, Robredo made not a single unforced error in the second set, and even found an ace in serving out the set, 6-3.

In the third, there was little between them, both serving to a high level, both hitting similar numbers of winners and errors—though Kyrgios was playing a more rash game that saw him lose 10 out of 18 points at the net: Robredo likes nothing more than a target against which he can unleash his top-spin cross-court single-handed tennis.

And like Kohlschreiber, the small, less powerful man took the resulting tie-break, 7-6(4), and continued to play near-flawless tennis—just two errors for the set—against a physically-struggling opponent who sprayed 14 errors.

Experience, smart tactics, impressive durability and fitness after a five-setter just two days ago carried the Spaniard to victory, 6-3. His desire, it was clear, burns as brightly now as when he reached the same stage, the fourth round, in his first visit to the US Open in 2001: “When I was set and nearly 3-0 down, I was believing that I could turn it back.

“To believe that on a moment like this, I think it’s experience. When you play in a centre court like this, and you are losing like this, you are getting smaller, smaller, smaller. Sometimes it’s really tough to come back. I did it. I think that experience helped me a lot. And the passion of the sport. I just wanted to win, fight till the last ball. That’s what I did. In the end it paid off.”

But like Kohlschreiber, it earns him the highest seed in his quarter, Wawrinka, though he does lead the Swiss 6-2, and even though he lost their most recent match as Wawrinka hurtled to the Australian Open title.

“I will try to pay back the victory that he got over me in Australia… Today he didn’t have to play. He’s going to be a little fresher than me. I will be there fighting for every ball and trying to win one more match.”

Could a third over-30 man with a one-handed backhand make it through to the last 32? Feliciano Lopez, 32, and with a left-handed serve-and-volley game, would take on the youngest single-hander, the rising force, Dominic Thiem.

In the bottom quarter, another young star, the No7 seed Grigor Dimitrov, would use his own right arm to try and beat fellow 23-year-old David Goffin. The winner would earn the chance of a possible quarter-final match with one more single-hander, No12 seed Richard Gasquet, who took on compatriot Gael Monfils.

But the most famous single-hander of them all—and like Lopez, Robredo and Kohlschreiber, into his 30s, would surely enjoy the biggest cheer of the day. When Federer walked onto court, his reception on this party weekend was guaranteed to fill not just the centre court the whole of Flushing Meadows.