US Open 2014: Michael Jordan watches on as Roger Federer cruises

US Open 2014: Roger Federer beats Marinko Matosevic to reach the second round as basketball legend Michael Jordan watches on 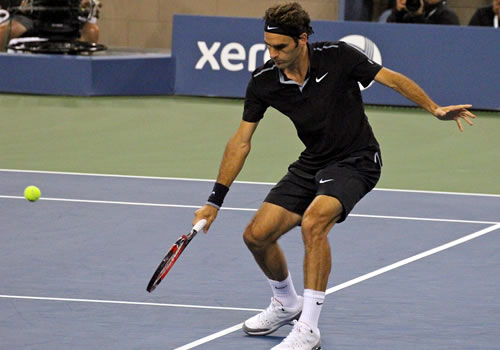 Cheered on by basketball legend Michael Jordan, Roger Federer became the first player to claim 50 match wins this season with a straight-sets victory in the first round at the US Open Tuesday night.

Federer enjoyed a 6-3 6-4 7-6(4) win over Australian Marinko Matosevic to set up a second-round meeting with another Australian, big-serving 26-year-old Sam Groth.

The five-time former champion Federer is now 23-1 in New York’s famous night matches, has won 68 matches at Flushing Meadows, and is playing in a record 60th consecutive Grand Slam.

Asked about Jordan’s presence, Federer said: “I was so happy that he came into the world of tennis for a little bit and that he got to see me as the character in the whole show was pretty cool.

“I met him yesterday for the first time and it was a big deal for me; it’s been a special past 24 hours. We talked how I prepare, how much I play, where I go next; we exchanged ideas about our respective sports. That’s what you talk about.

“He was my all-sports idol growing up. [NBA] was big on the German TV station, the NBA highlights. That’s where I saw him do all his moves. I was into his great athleticism. That’s what inspired me.”

Jordan sat in Federer’s box throughout the match, in which the Swiss debuted his new shoe, the Nike Zoom Vapor 9 Tour AJ3, which looked somewhat like the Air Jordans sported by the former Chicago Bulls icon during his legendary career. 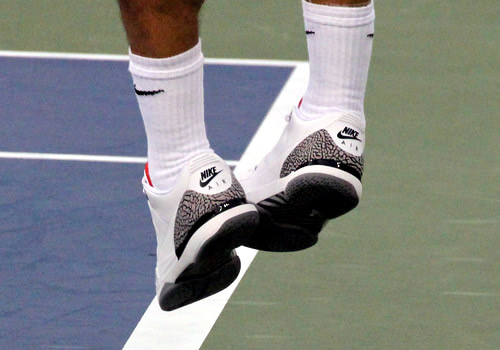 Asked what about Jordan inspired him, Federer said, “His longevity, the way he made it look easy, his will to win, wanting to be the best, delivering under pressure, being a superstar in a team sport, carrying his team for so many years. There’s so many things that he did well and represented the game really nicely, I thought. That’s why he also became my idol.”