US Open 2014: Andy Murray beats Jo-Wilfried Tsonga in straight sets to set up a quarter-final against Novak Djokovic 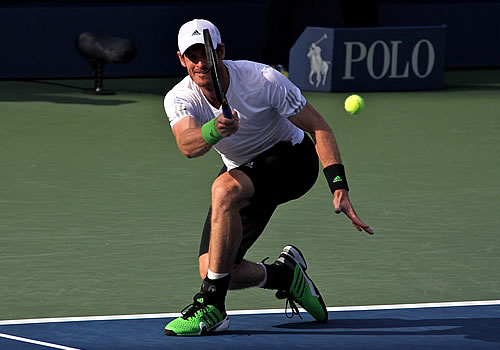 It’s the second week at the US Open, the final Grand Slam week of the year, and if the going has been tough thus far, it is about to get a lot tougher.

The weather has been challenge enough: baking hot, drenchingly humid and thrown into disarray by storms.

This middle weekend in New York is also marked by even more exuberant crowds than usual: It’s Labour Day, the first day of September, the last “official” day of summer for New Yorkers.

The vast, heat-soaked Arthur Ashe had already been warmed up by the time the 2012 champion Andy Murray took to court: Home favourite Serena Williams had done her stuff to reach the quarter-finals, while the Bryan brothers had done the same on Armstrong.

Now New Yorkers had the mouth-watering prospect of one of France’s finest, the popular Jo-Wilfried Tsonga, newly back to the top 10 and playing like the man who reached the final of the Australian Open six years ago and a career-high No5 in 2012.

He was one of the few men on the tour to have reached the quarters of all four Grand Slams, and had made it to the semis in three of them. The one that was missing was the US Open, and he was in the kind of form that put him contention to remedy that.

His run at the Toronto Masters took him through four of the strongest bets for the title here: Roger Federer and Grigor Dimitrov in the bottom half, and Novak Djokovic and Murray himself in the top half.

The win over Murray came at a timely moment, Tsonga’s first over the Briton since that 2008 Melbourne run. It also earned him a No9 seeding, just one shy of Murray, who himself had fallen in the quarters at Wimbledon, Toronto and Cincinnati.

As anticipated, it turned into a competitive and entertaining match and Murray, who had suffered dips in his form to lose a set in both his previous matches here, had to be at his best.

Both were determined to be aggressive, and it reaped early rewards for Murray with a chance to break in the second game. Tsonga held, and managed to do the same against a bombardment from Murray in the fourth, and things then looked destined for a tie-break.

But suddenly, serving at 5-6, Tsonga opened the door a crack and Murray pounded into the net for cross-court put-away and the set, 7-5. He had made just four errors to Tsonga’s 19—though that looked over-critical of the Frenchman. The story of the contest was in the net points: 9/9 for Murray, 6/9 for Tsonga.

Still neither man let up, and this time it was Tsonga who pressured in the third game to earn a first break point. Murray bellowed “Too slow!”—though he wasn’t. He netted a drop-shot from the baseline to go 1-2 down, and spent the entire change-over berating at himself.

Often accused of poor body language, getting down on himself, this was altogether more positive: Controlled anger, but bristling with energy. He went after Tsonga with gusto, and still the Frenchman rose to the challenge. By the seventh game, Murray had still to lose a point at the net, a perfect 12, and Tsonga had made 14 from 19.

Murray continued his own monologue, “Here we go, come on, this is it…,” and put his words into action. He made a cracking backhand cross-court winner and then ripped a forehand winner to break.

Murray’s speed, footwork and defence kept him in control—not to mention his 20/22 strike-rate at the net—and a reflex backhand volley held for 6-5. He harried his way to a vital break point and took the set, 7-5.

It looked, briefly, as though Murray would the same dip that afflicted his previous matches: He was quickly 0-2 down and looked emotionally drained. His first serve went missing, and he faced three break points in the third game before holding. But Tsonga too was feeling the heat, humidity and pressure. It was his turn to make a run of errors and they were all square again.

The road ahead faces an even steeper incline, for it is the quarter-finals and the much-hyped meeting with the 2011 champion Djokovic. And considering the top seed’s lack-lustre run through the US Open Series into this tournament, it would seem the Serb has timed his rise in form to precision.

He lost in his second matches in both Toronto and Cincinnati, but there is no denying that Djokovic loves this tournament and thrives on the hard courts. Now in his 10th visit to New York, he has never fallen short of the third round, and since his runner-up run in 2007, he has never fallen short of the semis. He has been one of the finalists for the last four years and, with his win over Philipp Kohlshcreiber, 6-1, 7-5, 6-4, has stacked up just one short of a half-century of match-wins at the US Open.

But what makes theirs such a high-profile meet is that, in this long intense rivalry, they have met only once at the US Open—in one of the toughest finals of recent times. It marked, too, Murray’s first Grand Slam title, and the Briton would go on to beat Djokovic in the final of Wimbledon last year.

This time, though, they were meeting uncharacteristically early, with the winner possibly facing the Australian Open champion Stan Wawrinka in the semis and five-time US champion Federer in the final.

But no-one ever said it would be easy.