US Open 2014: Agnieszka Radwanska admits she can't put her finger on why she performs poorly in New York after early exit 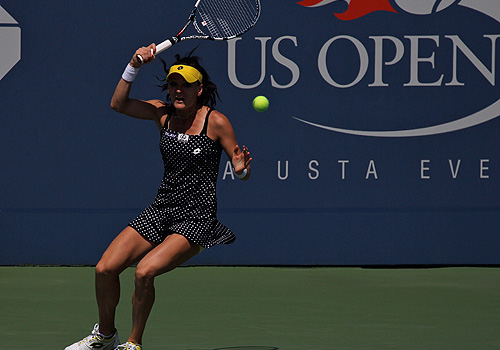 Agnieszka Radwanska admitted that she is puzzled by her poor performances at US Open after losing in straight sets to Peng Shuai.

The number four seed, who lost to her opponent at the same stage of the tournament in 2010, surrendered an early first-set lead to lose 6-3 6-4 to her Chinese opponent.

And the 25-year-old Pole was at a loss to explain her struggles on the hard courts at Flushing Meadows after becoming the first big-name scalp of the year’s final Grand Slam.

“I really want to know the answer. Then maybe I will find a way to play better here and just try another way to be in the second week,” Radwanska said.

“There is just something here that I can’t really pass those rounds. I have couple of years to try. Hopefully one day I will do it.”

On feeling the pressure at the US Open, Radwanska added: “Well, it’s always a good sign that I don’t have much points to defend, so it’s always the good side the next year.

“That’s why I think it’s maybe a little bit less pressure. But the other hand, it’s more pressure because I really want to do better. But not this year.”

Radwanska added that she has enjoyed a relatively good year despite her disappointing performance at the US Open this week, reaching the semi-finals of the Australian Open and winning the Rogers Cup.

“My season was not too bad,” Radwanska added.

“Couple of really good results, especially in the hard court. So I’m still fighting for the chance. I have still big chance to go there [end-year tournament], so it means the season was not too bad.”