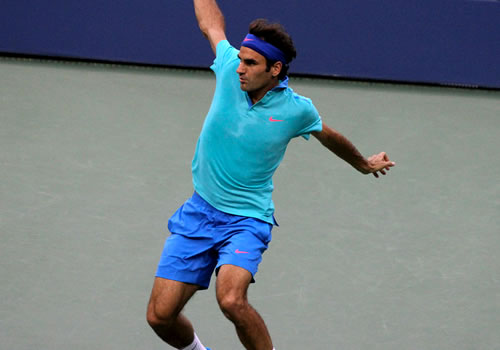 Roger Federer is through to the fourth round in New York Photo: Marianne Bevis

The forecasts had warned New York, the fans, the players from the moment holiday Sunday dawned blazing hot and horribly humid. Anyone who has visited the US Open before recognised the signs: a storm was coming.

It was debatable who had the worst of the deal, the players who sweated and toiled through the near-unbearable afternoon conditions or the ones who were forced to kick their heels while they watched the heavens open and the courts turn from blue to violet under deepening water.

For some, their matches would straddle both, and that included the feature match of the day, starring New York’s favourite champion, Roger Federer.

The weather would, indeed, become a metaphor for his match. The No2 seed and his Spanish opponent Marcel Granollers arrived to a capacity crowd and the kind of thunderous reception that drowns out even the planes that ply the skies across Flushing Meadows.

The No2 seed wore the colours of daytime rather than the black of night—azure blue and summer green—but clouds quickly gathered overhead and inside Ashe. In the blink of an eye, Granollers—a tall, attacking, man who entered the top-20 two years ago and a highly-successful double player, too—had broken the five-time champion, and he led 3-0: Federer had won just a single point.

The Swiss was beaten by the pace of the Spaniard’s serve, the speed of his one-two plays at the net, and most especially by the first-strike points he made on return of serve. Federer had no time to settle and find his rhythm, but the heavens would come to his rescue—though not before he found himself 2-5 down.

The clouds had already announced what was coming—a storm warning. Players and fans were hastily evacuated to seek shelter from the imminent thunder and lightning. As Federer said afterwards, he had never before left court before the rain arrived.

But it was just in time.

When the two men returned, two hours later, it was to a strangely quiet arena, just before the evening crowds took to their seats. Most, then, would not see Federer apparently take back control to break Granollers, nor Granollers respond as he had for the previous 25mins, with a perfect lob and then a backhand pass to break for the set, 6-4.

There was, then, a muted reception, especially when Granollers continued his attacking tactics to withstand a Federer assault on his first service game, fought off three break points, and then pounded another return-of-serve winner onto Federer’s baseline for a break point.

But now it was night, and though still oppressively humid, the conditions were different: And so was Federer. The third game of the set proved to a turning point, as Federer chased down a drop-shot to make a stunning cross-court winner, made a passing forehand, attacked the Granollers serve to make a smash, and had three break points. The Spaniard deployed another drop, Federer picked it up—as well as the lob that followed—and Granollers buckled under the pressure to net a final drop-shot.

The Spaniard continued to force the Swiss into some of his best tennis with cracking returns of serve, almost broke back in the fourth game, but would instead see the set race from his grasp as Federer—famed for his easy fluidity and control around the court but now showing what a stubborn hustler he can also be—raced to a 6-1 set.

And thus the scene was re-set. The heavy grey clouds that had gathered when they returned to court just before 7 had now dispersed, and Federer had adjusted his game to the heavy conditions with long backhand slices and some Edberg-esque volley pickups as he ghosted time and again to the net.

With success came more success—winners flew, serves speeded up and Federer’s overheads were now hit with a flourish. It was soul-destroying for the battling Granollers and his errors began to pile up. He conceded afterwards, “He was just better than me.” He also conceded another set, 6-1.

The third-set stats summed up the scale of the Spaniard’s task: two winners to Federer’s 17, with fewer than a dozen errors between them. Just as in the previous set, the Swiss raced to a 3-0 lead in the fourth, and refused to concede any of the three break points he faced in the fourth game. Indeed he hit his fastest serve of the tournament thus far—130mph—as he swept to another 6-1 set and into the second week of the US Open for the 14th consecutive year.

Of his form, Federer said afterwards: “I think especially now it’s been really excellent the last three matches here. I feel very explosive, quick. The co-ordination is there, as well. I feel like I’ve gotten used to the hard courts by now. It’s really working well. I’m very pleased.

“Today conditions were much more humid so you could feel a little flat out there, but that wasn’t the case. I was able to power through that. I’m happy I wake up every day and I’m ready to go.”

He went on to make an interesting aside about the 32-year-old Tommy Robredo who beat him here in the fourth round last year: “It’s also great to see Robredo fit as a fiddle at the end last night. I thought that was impressive. He’s my age, too. I think when you keep yourself in shape and train the right way, that’s how you do it.”

This had been a demanding test from both Granollers and the weather. The Spaniard had Federer racing to pick up drops, chasing back for lobs, leaping for overheads and diving low to make volley pick-ups from sliced returns to his feet. Once he had a read on the tactics and conditions, the Swiss passed all the tests. No wonder he was pleased.

Federer next plays No17 seed Roberto Bautista Agut, who beat Adrian Mannarino, 7-5, 6-2, 6-3. But looking beyond that to the quarters, a hugely entertaining contest looms. The young, charismatic Grigor Dimitrov, seeded in the top eight for the first time in a Major, also overcame a slow start in the stormy weather to beat David Goffin, 0-6, 6-3, 6-4, 6-1 and will play the ultimate showman and No20 seed Gael Monfils, who beat Richard Gasquet, 6-4, 6-2, 6-2.

The first day of September has arrived on the last day of New York’s summer, Labor Day, with threats of more storms after high heat and humidity. It was ever thus at the US Open—it was ever thus that Federer would handle it all with aplomb.