US Open 2014: Roger Federer saves two match points as he battles back to beat Gael Monfils to reach the semi-finals 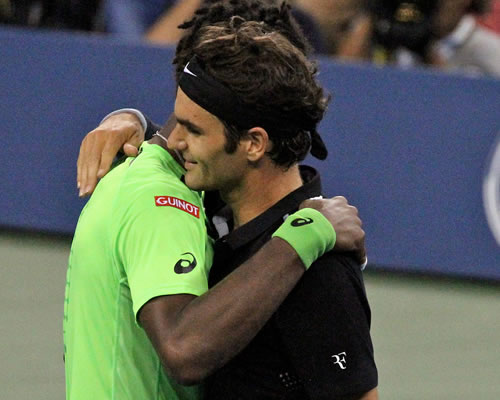 The pair embrace after the dramatic match Photo: Marianne Bevies

A year ago, the man who would take on five-time former champion Roger Federer for a place in the US Open’s semi-finals was not even seeded in New York.

Yet the showman talents of Gael Monfils, in a career of see-sawing fortunes and rankings, took him as high as No7 three years ago.

The flamboyant Frenchman won his first title at 17 but not another until he was 21. He reached the final of the Paris Masters in consecutive years 2009 to 2010 but not another Masters since. And he went from 2011 to 2014 without adding to his tally of five titles.

No wonder his rankings were erratic. No wonder his status among the elite top 10 had never been truly assured. He dropped to 119 last May before beginning his latest concerted rise to a seeding this week of 20.

So this tall, super-fast, super-athletic, unpredictable Monfils has never been a man players want to find in the early stages of a draw—or anywhere in a draw. For when he is in good physical shape—and he has contended with multiple injuries to knees and wrist—and in determined frame of mind—and he can vary from nonchalance to strutting self-belief—he can outrun, out-manoeuvre and outplay almost any man out there.

He has beaten Rafael Nadal twice, Andy Murray twice, and more pertinently for the game at hand, Federer twice—in fact twice in their last four meetings.

Then in New York, Monfils had not dropped a set despite taking down No12 seed Richard Gasquet and No7 seed Grigor Dimitrov.

No wonder Federer was relishing their latest showdown: “I think I can speak on behalf of so many players: We love watching him play. It’s nice seeing him do well again…

“I think our games match up nicely against each other. We played a good, tough match just last week. Let’s hope it’s going to be memorable for everybody involved…”

But lest anyone forget, Federer was already in his 43rd Grand Slam quarter-final and aiming to extend his own record of 35 Major semi-finals. He leads the tour this year with match-wins—53—and won two titles from four back-to-back finals before arriving in New York.

The key to the match seemed sure to be determined by the baseline firepower and serving of Monfils and the sharpness of Federer’s net game.

In the event, it became something more fundamental, a battle of wills, of determination, of brute stubbornness. In the second game, Monfils dug deep to fend off five deuces and two break points, and in the fifth, Federer was faced with a similar onslaught: three deuces and four break points—except that Federer hit a forehand wide and gave up the break.

So deep and hard was Monfils hitting the ball from the baseline, and picking up Federer’s serve so sharply, that the Swiss could do little about it, and Monfils had first blood, 6-4.

They had the same number of points, were separated by just one error, but Monfils had the edge in speed, anticipation and pace through the court. He also happened to win all five of his net chances.

The brutal contest continued in the same vein, and Federer was clearly struggling to find rhythm against the relentless strikes of Monfils, He contributed to his own downfall, though, with a couple of forehand errors in a long opening game. He also underestimated the speed of the 6ft 4in sprinter, who comfortably chased down a drop shot and broke.

In a replay of the first set, Federer too had a break-back chance, but after a bizarre slip from Monfils, combined with a challenge of Federer’s return, the Frenchman was down but Federer was out. It proved to be enough of an advantage, and Monfils’ ankle was no problem either. First he made lobs, then he made a huge cross-court winner, he twice served to love and, to rub salt into the Arthur Ashe crowd’s wounds, he broke again for the set, 6-3.

This most temperamental of players had made just four errors to Federer’s 13, the Swiss constantly on the back foot and unable to get the net quite quickly enough to make his usual volley kills.

Still neither man let up and the tension intensified as Federer this time got the first strike to lead 2-0. He saw that evaporate with two more errors and a cruel net-cord. One more forehand from the Monfils arsenal flew past the Swiss and it was 2-2, but Federer would not be denied his share of the glory. He attacked the net three times to break again and that saw him to the third set, 6-4.

Both men are fast players, but this had already taken almost two hours. The crowd was pumped, the air electric. Could Federer possibly come back from two sets down as he had done just eight times in his entire career? Well if he kept up this focus, just possibly: He had made only one unforced error in the third set to 12 winners. But he needed the fourth set or it was over.

He fought off a break point in his first service game and went after Monfils in the next, winning the longest rally of the match, 22 strikes. A leaping backhand smash brought the house down and a huge forehand winner took the break.

It would not be enough—yet. Federer was pumped, and when he was denied another break chance by a net cord, he pounded it with his racket in fury. Then the umpire got the sharp edge of his tongue. To add insult to injury, Monfils came up with two 137mph serves to hold at 3-3. They were all square across the board, in winners, forced errors and unforced errors, and separated by just one point—120 to Federer, 119 to Monfils.

Could Federer master the adrenalin as he stepped in to serve at 4-5? That was not the worst of it. Two wayward forehands and he faced two match points, and the arena exploded. But that deeply engrained will to win turned his forehand to a winner, he survived, and roared himself on.

There must be few more intimidating sights than a champion on the surge, especially when he attacks the net again and again. It worked, Monfils double faulted twice, was broken, and Federer served out, 7-5.

Monfils was broken more fundamentally too: The Federer will is a tough one to crack, and Monfils was broken twice by a near flawless Swiss who would drop only two more points on his serve to take the win, 6-2, in three hours and 20 minutes.

Federer could not take the smile off his face as he fielded post-match questions: “I got off a good start, so I was actually feeling alright, but then when I was down two match points, I wasn’t feeling so great anymore. I thought, ‘This is it. This is last point, man. Just go down fighting, don’t miss an easy shot and let him have it. It’s fine.’

“But I served well and stayed in the match and somehow turned it around. I felt great in the fifth, though. I was really starting to play better and better as the match went on, and that’s a great feeling.”

It took Federer to the semi-finals for a ninth time at Flushing Meadows, and for the first time since 2011. It also earned him a second meet with Marin Cilic in the space of a month. The No14 Croat scored an impressive win over the No6 seed Tomas Berdcych, 6-2, 6-4, 7-6(4), to reach his first Grand Slam semi-final since his first in Australia in 2010.

Federer knew he was in for a tough semi after their close-fought match in Toronto: “I’m looking forward to playing Marin. He’s a great guy. We had a tough, tough match in Toronto. I think I needed nine match points to close him out and beat him at midnight, 6-4 in the third, so we know what to expect.”

The last time Federer came back from a two-sets deficit was against Julien Benneteau on the way to the Wimbledon title in 2012. Perhaps it will prove to be an omen for New York, for Federer has a fire in his belly.