US Open 2014: This year, there has been a new Swiss story, and one that displays near-perfect timing 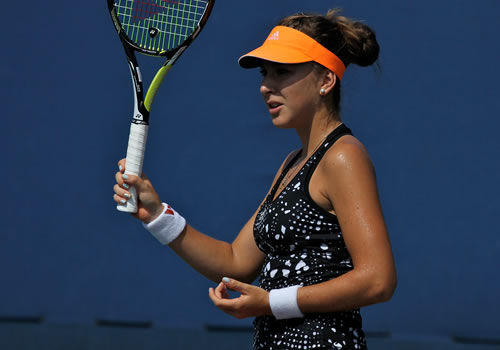 It’s been a rare Grand Slam indeed in recent years that has not featured two Swiss among its seeds.

Roger Federer is playing in a record 60th consecutive Major and in his 15th US Open. And not since that first in New York, in 2000, has he played one unseeded. He is the No2 seed here this year.

Stan Wawrinka, four years his compatriot’s junior at 29, is playing in his 39th Grand Slam—and he too has neither missed one on the way to his 10th US Open nor been unseeded for over six years. He plays this year’s tournament as the No3 seed.

And far from losing their powers, these two men, who hail from a country with a population less than that of Greater London, seem to be finding their best form as the tennis year reaches its final Grand Slam climax.

On the back of his first Major semi here last year and his first appearance at the World Tour Finals, “Stan the Man”, as the late bloomer Wawrinka is now dubbed, won his first Grand Slam in Australia and his first Masters in Monte Carlo. He scored wins over Federer, Novak Djokovic and Rafael Nadal along the way and, ahead of his return to those successful hard-courts, he even made his best-ever run on the grass at Wimbledon.

As for Federer, having won his 17th Major at Wimbledon in 2012, and a falling-off in form in 2013 with back injury, he returned to the 2014 fray with a new racket, new coach, restored fitness and a revitalised confidence. He now leads the tour with eight finals, 50 match-wins, 12 victories over top-10 players and on the run of four straight finals with a 22nd Masters title in Cincinnati.

And here, Wawrinka has made trouble-free progress to the quarters while Federer targets a 43rd Major quarter-final when he faces No17 seed Roberto Bautista-Agut.

But this year, there has been a new Swiss story, and one that displays near-perfect timing. For Switzerland’s most famous tennis export before Federer was Martina Hingis and, partnered with singles quarter-finalist Flavia Pennetta, Hingis has reached the doubles quarters here for the first time since 2002.

Though famed for her singles records—five Major titles from 12 finals—she built a formidable doubles record, too. The year she won the US title, in 1998, she made a clean sweep of Grand Slam doubles titles—so it would surprise no-one if she, with her equally successful doubles player Pennetta—won another Major title here come finals weekend.

Yet still there is another strand in the Swiss tapestry that has captured just as many headlines, the emergence of a star-in-the-making, 17-year-old Belinda Bencic.

She is the youngest woman in the top 100 and playing the senior Grand Slam tour for the first time this season. And having reached the third-round of Wimbledon, has now been gliding through the New York draw with an elegant power not dissimilar to her famed compatriot.

First she beat Yanina Wickmayer, then the No31 seed Kurumi Nara, followed by No6 seed Angelique Kerber, and finally No9 seed Jelena Jankovic to reach the quarter-finals.

There was, too, a reason why the Bencic game rang Swiss bells. Her sometime coach, along with her father, had been Melanie Molitor, mother of Hingis.

Bencic explained in one of her first Major press conferences: “Obviously it was Martina [whom] I was looking up to, and I was also practising with her mom. So we have similarities in the game… Almost everything I know, I know from [Molitor].” 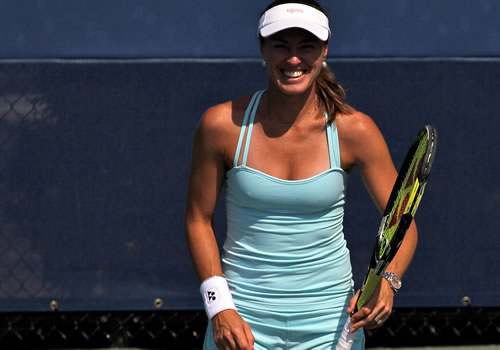 Martina Hingis, partnered with Flavia Pennetta, has reached the doubles quarter-finals in New York for the first time since 2002 (Photo: Marianne Bevis)

Bencic joined Molitor’s tennis school at four years old and worked there until 2012. So not surprisingly, Hingis has been watching the matches of the woman who is just half her age. And to add just one more twist to the tale, Bencic was born in the month that Hingis became No1, in March 1997, and was now the youngest quarter-finalist at the US Open since Hingis won the title in 1997, 20 days short of her 17th birthday.

Naturally Hingis, who has sat courtside in support of Bencic, has been bombarded by questions about the teenager almost as much as about her own doubles exploits.

“I have watched all her matches so far in this Open. She surprised me. Honestly, the first match—I think already I practised with her on Sunday and I’m like, wow, she played really good. So I was expecting her to do well, but not as well as she actually did in the Wickmayer match.

“I think after that she just started to believe. Yesterday it was a great match. I’m very happy for her. It’s nice. My mom did most of the work the last 10 years, so she’s finally proving it. You know, very good tournament so far.”

As if the Bencic story needed any more intrigue, her latest match was against the only other unseeded woman in the last eight who was also playing in her first Major quarter-final, the No39-ranked Shuai Peng.

The Chinese woman, who has this year been ranked No1 in doubles and won the Roland Garros women’s doubles title, had also cut a swathe through the seeds this week. She took out Agnieszka Radwanska, Roberta Vinci and Lucie Safarova, and that form opened up the Bencic game in ruthless fashion, as she out-hit the Swiss with flat, angled shots from all parts of the court.

Remarkably, Peng has advanced to her first Major semi for the loss of only 30 games: Her story continues.

But for Bencic, who only last year was a junior titlist at Wimbledon and the French Open, the fairytale comes to an end—for this year at least.

This time last year, she was ranked No330 in the world but is likely to be No33 by next week. And that means she could be seeded in Australia:

“Yeah, it’s incredible. I mean, it’s my fourth Grand Slam. Next year maybe seeded in Australia: It’s unbelievable. Next year I don’t have to play any more qualies. I’m so happy.”

She will, though, then be able to play the full WTA tour rather than the restricted one imposed by her age. The only way for the latest Swiss star at the moment, it seems, is up.