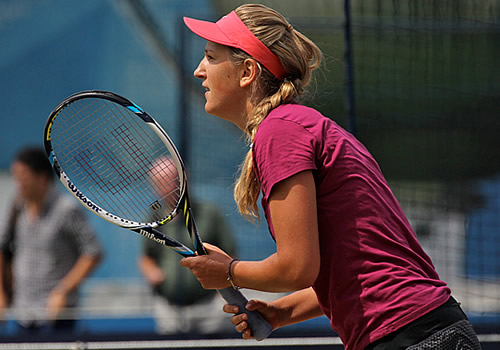 The Belarusian, who is seeded 16th at Flushing Meadows, beat Serbian qualifier Aleksandra Krunic 4-6, 6-4, 6-4 in an energy-sapping two hours and 19 minutes in New York.

Azarenka will face No17 seed Ekaterina Makarova in the quarter-finals, but the former world number one was more concerned with wishing Monfils a happy 28th birthday, spontaneously breaking into song under the lights on Arthur Ashe court.

“He text me that he loves me very much – and not in that way,” Azarenka said.

“I just wanted to wish him happy birthday. I wanted to make it special. He was really touched. So I think that was kind of cool.”

Azarenka added: “He’s one of the best entertainers in tennis. It’s so amazing to watch him play.

“Sometimes I get a little bit frustrated with him because I know he should win some matches that he loses. I think he’s still yet to reach his full potential, because I think he’s super, super talented.”