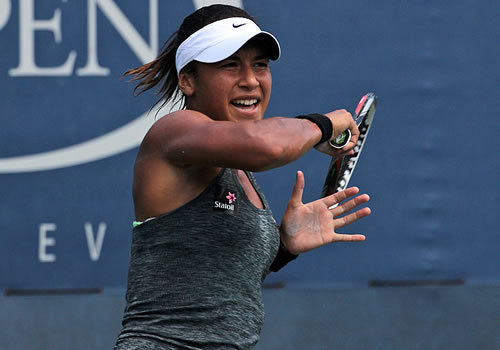 On paper, Heather Watson’s first match at this year’s US Open was a winnable one for the 22-year-old woman newly back inside the top 50.

For while the top top-ranked Briton had been ranked here before until glandular fever knocked her back to 121, she was back to her energetic self and winning matches—matches like the one that beat No12 seed Dominika Cibulkova in Montreal just a month ago, and No11 seed Flavia Pennetta to reach the semis at Eastbourne two months ago.

Watson had also reached the second round in both Roland Garros and Wimbledon this year, but a Round 2 finish in New York would have meant a great deal. The Briton had gone out in all three previous appearances at the US Open in the first round.

But a closer look at the same paper revealed that Watson’s opponent Sorana Cirstea, though currently ranked below her at No80—and beaten by Watson in their previous meeting—was a considerably better player than her ranking suggested.

For a start, that previous meeting in Miami in 2012, the last time Watson was in the top 50, went to a third-set tie-breaker. For another, Cirstea reached a ranking high of 21 only a year ago when she was a runner-up to Serena Williams in Toronto. But then she was hit with injury that affected the rest of her season.

Even so, she arrived in this match with 12 first-round losses to her name this year, including Montreal and Cincinnati. Which made it all the more frustrating for Watson that Cirstea arrived for the first match on Court 13 at Flushing Meadows in outstanding form.

Watson held her opening service game to love, but by her second, Cirstea was taking advantage of the baking conditions to hit with power, depth and precision. Particularly on the forehand, she pounded flat winners just inches over the net that not even the nimble Watson could pick up. It was just such a return-of-serve winner that broke the Briton’s serve.

Another from the same top drawer brought up a third break point in the sixth game and Cirstea passed Watson to take a 5-1 lead. Not content with taking Watson’s serve apart, she made winners off her own, acing to take the first set, 6-1. It was the Romanian’s 14th winner in 26 minutes.

The pressure, already great, began to take its toll on Watson early in the second set, as she missed a growing number of first serves—she could not get above 50 percent—and her second serve was punished time and again. She would end this set with not a single point won on her second serve.

Cirstea broke in the first game, and there came a glimmer of hope for Watson as she broke straight back, playing the Romanian at her own game by stepping in to take the initiative with aggressive ground-strokes off both wings.

The hope was soon doused by Cirstea, who went 40-0 up on Watson’s serve and the Briton double faulted—one of five in the set—to hand back the advantage.

I didn’t play very well, made a lot errors—partly because she was hitting some good shots and winners

Watson’s fighting spirit did not flag, but neither did her opponent’s level of play. She broke twice more and served out the match, 6-1, in 54 minutes.

Cirstea advanced to the second round having scored twice as many points as Watson, but more telling were the winners and unforced errors. The Romanian hit 17 winners to a tidy 11 errors, while Watson managed just six winners in the match—two of them from aces—and 23 errors.

Watson had faced the tantalising prospect of a first encounter with the new young star of women’s tennis, Eugenie Bouchard, in the second round. As it is, her ambitions for a first win in New York will be postponed for another year.

She put on a brave face afterwards, giving credit to her opponent’s performance: “I didn’t play very well, made a lot errors—partly because she was hitting some good shots and winners.

“She played very well today, I have to give her credit. She didn’t give me any breathing room. It’s disappointing to leave after a first-round loss here, but I’m gonna have a lot more weeks.”

Watson will next head to Asia where she won her only title, Osaka, in 2012.

The 11am start at Flushing Meadows saw several other women’s matches done and dusted in double quick time, too.

No8 seed, and in good form this summer, Ana Ivanovic dropped only three games to beat Alison Riske.

The 2011 US Open champion and No23 seed Sam Stosur dropped only five games against Lauren Davis.

Mona Barthel took out the first seed, No32 Shuai Zhang, 6-1, 6-2—the first seed lined up for Serena Williams, who opens her title defence late into the New York night—on Arthur Ashe, naturally.

Marina Erakovic then beat the No20 seed and 2004 US champion Svetlana Kuznetsova in a final set tie-break.

But perhaps the most eagerly awaited match of the day in women’s draw was between No16 seed Victoria Azarenka and Misaki Doi, ranked more than 70 places below last year’s finalist and standing at 10ins shorter.

No-one would normally give the Japanese woman a chance, except that Azarenka had missed so much of the season with injury, first her ankle and, during Cincinnati, her thigh. What form would she bring to New York?

Only time would tell—but she knew that the first seed in her section was already.

US Open 2014: Maria Sharapova gets ‘goosebumps’ after opening win