US Open 2014: Caroline Wozniacki and Sara Errani are through to the quarter-finals after stormy day in New York 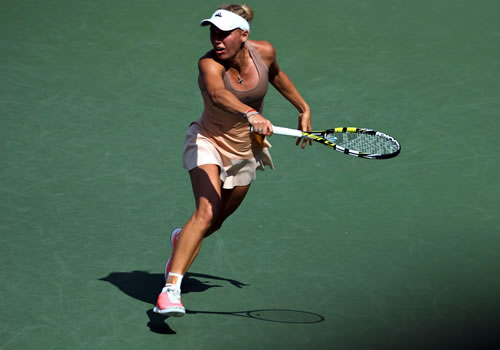 Caroline Wozniacki is through to the quarter-finals Photo: Marianne Bevis

Holiday Sunday, and the weather reflected it for New Yorkers keen to make the most of their very own Grand Slam on the weekend they call the last of summer.

It was baking, sizzling, humid—so hot that even the extreme weather policy kicked in for arguably the headline women’s match of the day. It featured No5 Maria Sharapova and No10 Caroline Wozniacki, both of them with huge fan followings, both former world No1s, the former a US Open champion, the latter a US Open finalist.

Sharapova was the favourite, the last top-eight player left standing in the bottom half of the draw—but Wozniacki was showing signs of a real return to the form of old.

They had met only once in a Grand Slam, at this tournament in 2010, and when their second US Open meeting went to a third set, they were offered—and gladly took—a 10-minute break from the court.

When they returned, they continued to try to wrench control from each other—Sharapova wielding the greater power from the baseline but Wozniacki defending and counter-punching with speed and accuracy. 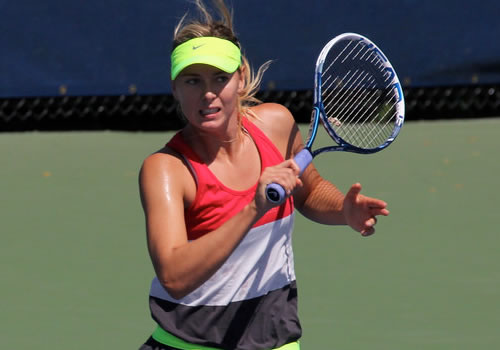 And it was the Dane who drew first blood for a 3-1 lead and broke again in some style with a backhand winner on match point to break for the set and match, 6-2. It marked an important return to the top table, her first Major quarter since Australia in 2012.

The story that had captured the imagination at this year’s US Open was that of qualifier Mirjana Lucic-Baroni.

Hers was a remarkable story of persistence and desire against the odds. She won the first WTA tournament she played at 15 and then the Australian Open doubles title on her debut, also at 15. She reached the Wimbledon semis at 17 but was then knocked back by injuries and personal struggles that saw her play hardly a tournament between 2000 and 2009.

Then began a gradual climb back up the rankings, and she had reached the last 16 with wins over No2 seed Simona Halep and No25 seed Garbine Muguruza. It marked just her second time in the second week of a Major for the 32-year-old, 15 years after the first.

Now Lucic-Baroni took on the terrier-like tennis of French Open finalist, US Open semi-finalist and No13 seed Sara Errani. She battled back from a set down to take this to a decider, but Errani was like a backboard, and an increasingly weary Lucic-Baroni stacked up the errors in sweltering conditions.

It would, then, end not with a bang but a whimper, 6-0, in third set, and with perhaps the most extreme stats of the tournament so far: Lucic-Baroni made 45 winners to Errani’s four, but 65 unforced errors to Errani’s nine.

The gutsy 5ft 5in Errani summed it up thus: “The other players have bigger strokes than me, but I try to stay in the match [by running]. It was a tough match, but I felt good mentally.”

She will next play Wozniacki.

Quote of the afternoon

From Sharapova an hour after Arthur Ashe was evacuated in the first set of Roger Federer’s third-round match against Marcel Granollers:

“[phone alarm] I think that’s the flood warning. Darn it. If I was only there a little longer!”

The rest of the best

Sharapova and Wozniacki were just two among the last 16 in the women’s draw in pursuit of a quarter-final place, though many other favourites had already fallen by the wayside. In fact, five of the top eight: Simona Halep, Petra Kvitova, Agnieszka Radwanska, Angelique Kerber, and Ana Ivanovic.

Still in place alongside Sharapova, however, were world No1 Serena Williams and No7 Eugenie Bouchard, but irrespective of who lifted the trophy in a week’s time, Williams was guaranteed to keep that No1 ranking. However, the No2 ranking remained up for grabs should Bouchard win the title.

And Wozniacki was not the only woman among the last 16 to have reached the final here before—in 2009. Jelena Jankovic reached the last day in 2008 and Victoria Azarenka has done so the last two years: both lost to Williams. All of them have also been No1s. 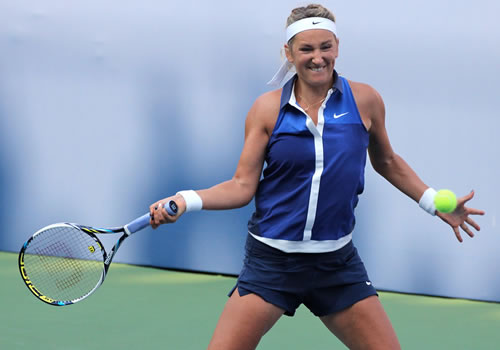 Among the rest were five unseeded players. As well as Lucic-Baroni came Belinda Bencic—the only teenager out of eight who made the main draw—Kaia Kanepi, Aleksandra Krunic and Peng Shuai.

At the other end of the scale, Serena Williams, who turns 33 this month, is the oldest remaining woman in a draw that boasted 15 over-30s at its start. Williams has been joined by just two others, Flavia Pennetta and Lucic-Baroni.

The Italian woman, who has gone from strength to strength in New York—three times a quarter-finalist and last year reaching the semis for the first time—will try her luck again against the No29 seed Casey Dellacqua, who has never got beyond the second round here before.

Azarenka, who has yet to meet a seed, plays qualifier Krunic.