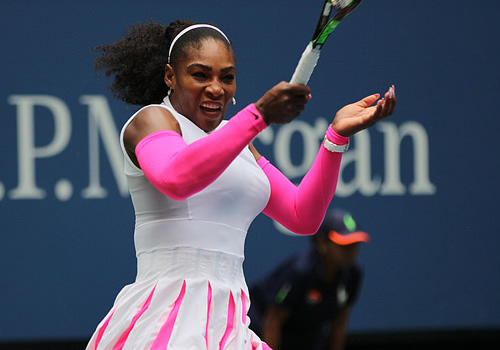 If there is one name that comes as no surprise in the final-four line-up of women in contention for the 50th US Open title, it is the tournament’s favourite daughter, Serena Williams.

Six times the champion in New York, Williams missed last year’s tournament to give birth to her first child, but 12 months on is into her ninth consecutive US semi-final and her 12th in the Big Apple overall. She aims to reach her 31st Major final and, if successful, target her 24th Major title. And that would make her the oldest Major champion of the Open era—beating the record she herself set in Australia 2017 while almost two months pregnant.

But for Williams, the achievements and statistics have piled ever higher since, still weeks short of her 17th birthday, she won her very first Major at the US Open. She has gone on to win 94 singles matches in New York, across what is now a 20-year-span, and despite playing only six events since returning from maternity leave—incidentally making the final at Wimbledon along the way—she has rapidly put herself into the frame as favourite to equal that long-pursued record held by Margaret Court of 24 Major singles titles.

There would, of course, be no better place to do it.

But who are the other three women with ambitions of their own in New York, who could halt this remarkable run?

First, who has not made it to the final four?

· Of the seven former US Open champions in the main draw, only Williams remains

· Of the additional six former champions at the other Majors in the draw, only Williams remains

· Of the last six Major champions, none remains—the last woman to win who is present is, yes, Williams

· Of the six hard-court champions between Wimbledon and the US Open, none remains

· Of the top 12 women in the WTA rankings and the WTA Race to Singapore, none remains

· The No1 seed Simona Halep was the first top-seeded woman in the Open era to lose in the first round in New York, and with Caroline Wozniacki’s loss in Round 2, this became the first time that the two top seeds lost so early in the Open.

The last four facts and figures

Serena Williams [in addition to the above introduction]

Predicted ranking after USO, No16 with final finish, No11 with title

US Open best result, six titles plus two runners up, 94-11

Seeds beaten this year, No16 Venus Williams, No8 Karolina Pliskova

Predicted ranking after USO, No15 with final finish, No9 with title

Seeds beaten this year, No7 Elina Svitolina, No3 Sloane Stephens

NB Sevastova never advanced to a hard-court final before

NB youngest US Open SF in a decade

Predicted ranking after USO, No9 with title

Predicted ranking after USO, No12 with final finish, No7 with title

US Open 2018: A tale of two midnight dramas by Roger Federer and Rafael Nadal in New York