The two finalists rise to Nos 1 and 2 in ranks; Ruud makes own history for Norway 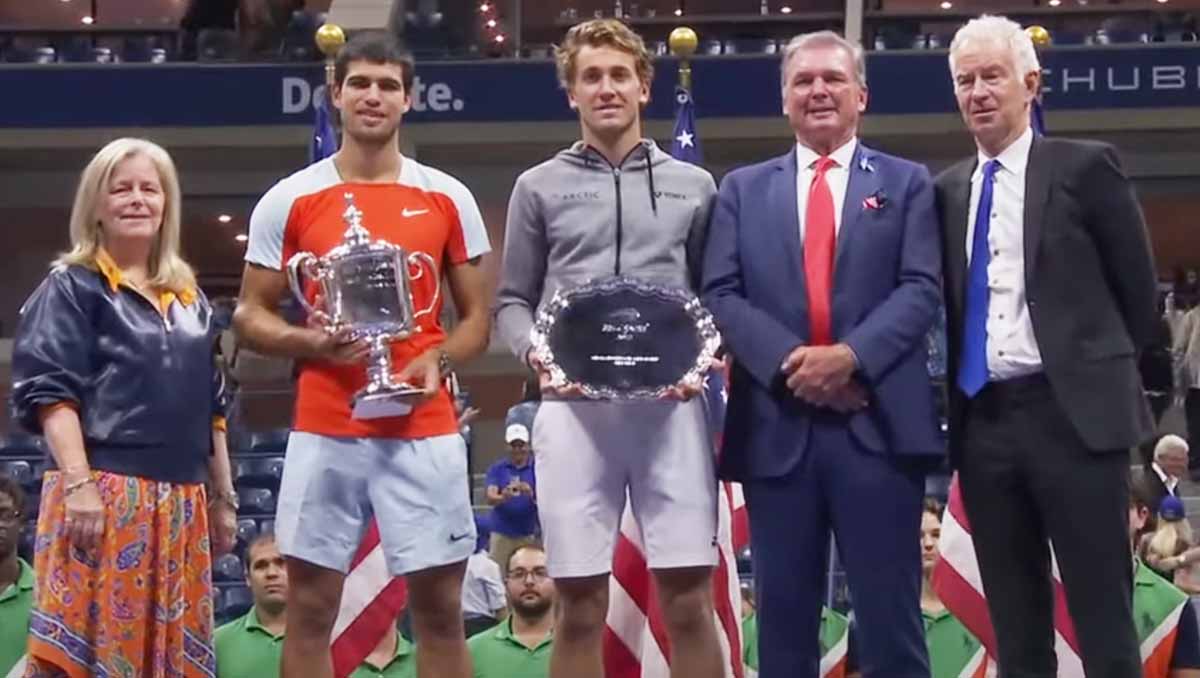 The four tennis Majors were down to the last one of 2022, the US Open.

The 128 players in the men’s singles draw had become two.

The five among them who could have ended the tournament as world No1 were reduced to these same two. And neither was the man who began the fortnight as defending champion and No1, Daniil Medvedev.

Neither did they include the other man ‘defending’ the title he won the last time he played in New York in 2019, No2 Rafael Nadal.

Indeed, none of the six Major champions in the initial line-up made it through. Instead, the last two would guarantee a brand new US Open champion, a first-time Major champion, and a fresh name at the top of the rankings.

Not that either man, No3 seed Carlos Alcaraz or No5 seed, Casper Ruud, was unfamiliar to the winner’s rostrum: They would not, of course, be already ranked so high if that was the case. But their rise to the top had been swift and sure.

Only 15 months ago did the teenage Spaniard Alcaraz break the top 100 as he came through qualifying at Roland Garros. His first final and title came a month later in Umag, and he put on a huge spurt inside the top 40 with his breakout Major run, the quarters at the US Open.

Fast forward through the intervening year. He won the NextGen Finals, then in 2022, four titles from six finals—and not just any titles. There were two Masters on the hard-courts of Miami and the clay of Madrid—where he beat both Nadal and Novak Djokovic—plus two ATP500s. All the while, he had been breaking ‘youngest since’ records for ranking breakthroughs, reaching No4 last month.

And including his run through the US Open draw, he now topped the tour in match-wins, 50 of them.

Little wonder, then, that even before the start of the tournament, the ground-breaking teenager was being touted as a possible title contender.

Ruud’s journey began a little earlier: He won his first title at just turned 21 and had newly entered the top 50 when Covid halted the tennis tour. The postponed Rome Masters gave him a first semi run at that level, and come 2021 through to this summer, he made at least the semis of six different Masters, including the ATP Finals. He ticked off his first Masters final in Miami, beaten by Alcaraz, his first Major final at Roland Garros, and added eight titles to his resume. All of which had made him a fixture in the top 10 for a full year.

And while all but one of his titles had come on clay, Ruud’s prowess on hard-courts was clearly growing apace. He survived his only five-setter in New York to reach the fourth round for the first time,

In contrast, Alcaraz had been forced through three five-setters back-to-back to reach the final. They kept him on court for over 13 and a half hours, and well into the early hours of the morning.

Who, then, would be the victor in his historic final, one of the youngest finals in US Open history, the first Major final ever in which both men were competing for their first Major title and the No1 ranking?

The break points in the early games came thick and fast: Ruud saved two in the first game, Alcaraz in the second. Then the teenager worked 0-40 in the third and forced the error to convert for the first advantage, 2-1. He fought off another break point with some testing serves, 3-1, deploying some killer drop shots along the way and running Ruud ragged.

At last an easy hold for Ruud, to love, but the match was already almost half an hour old. Alcaraz was breaking out his all-court power-and-touch skills, chasing to the net for volley finishes, serving with power and variety, and served out the set to love, 6-4.

Ruud, thus far, could not match his opponent in almost any department except, perhaps his speed and movement, and when he got his forehand into play. But Alcaraz was playing with such penetration, such attack, and with plenty of net game, that it was proving hard to win any control.

Ruud’s serving level did pick up in the second set, and he fended off a break point in the fifth game, 3-2. He was lifting his level, now, mixing things up, threw in a couple of lobs and chased down drops from Alcaraz to get a break, and finally some cheers from the crowd.

The Norwegian had to stave off a break point but did so with a superb smash winner from the back of the court, 5-2. He was not done, and helped by some wavering serving from Alcaraz, Ruud grabbed the initiative to break again for the set, 6-2.

The Spaniard was quick to respond, breaking in the first game of the third, courtesy of a superb angled drop shot. He had the initiative back, and cranked up with renewed strength to force errors from Ruud. One break, and the chance of another, had Alcaraz on the front foot, but Ruud rebounded to hold, and then broke to level things again.

They edged towards a tie-break, but Ruud upped the stakes to twice produce forehand winners for earn break/set points. However, the courageous Alcaraz denied him in an explosive, tense, 11-minute hold that had the Ashe arena on its feet.

The teenager had the momentum and the crowd: Would he get the third set? He fired off winners in every direction, and an uncharacteristic shanked forehand from Ruud conceded the tie-break, 7-6(1)—an hour and a quarter for the set.

Alcaraz opened serve in the fourth, and won the longest rally of the match thus far, another pummelling, high-intensity exchange, and then the game.

Both continued to play aggressive tennis, trying to take the initiative, and served well. The turning point, though, came courtesy of the Alcaraz backhand, two winners and a break point in the sixth game. Ruud made the fatal error, conceded the break, 4-2, and then the teenager sealed a hold with aces and forehand winners.

Ruud stuck admirably to his attacking game plan with a love hold, but there was no halting the bristling, confident tennis of the youngster, who had been winning plaudits and fans throughout his many appearances on Arthur Ashe this fortnight.

He served out victory, 6-3, in a match that asserted not only the brilliance of tennis’s new, and youngest ever, world No1, but the quality of this new, young generation of players. For Ruud had played his part both in a memorable final and in a memorable tournament to become a worthy No2.

The Norwegian summed it up in his runner-up speech:

“Today was a special evening. Both Carlos and I knew what we were playing for and what was at stake. We will be No2 and No1 in the world tomorrow, I think it is fitting. I am disappointed of course that I am not No1, but No2 is not bad either. I am happy with that number and I will continue to chase for my first Grand Slam title and No1 ranking.”

Here had been fast-paced tennis, full of athleticism but also sportsmanship, packed with stunning baseline shot-making but also attacking net play—and between them, they had won 57 points at the net—and where power was supplemented by deft touch, drop-shots, lobs and crafty slice.

If these are the new faces of men’s tennis—and both have now qualified for the ATP Finals in November—may they ply their trade for many years to come.