Victory leaves Pole head and shoulders above rivals in ranks, with Jabeur now world No2 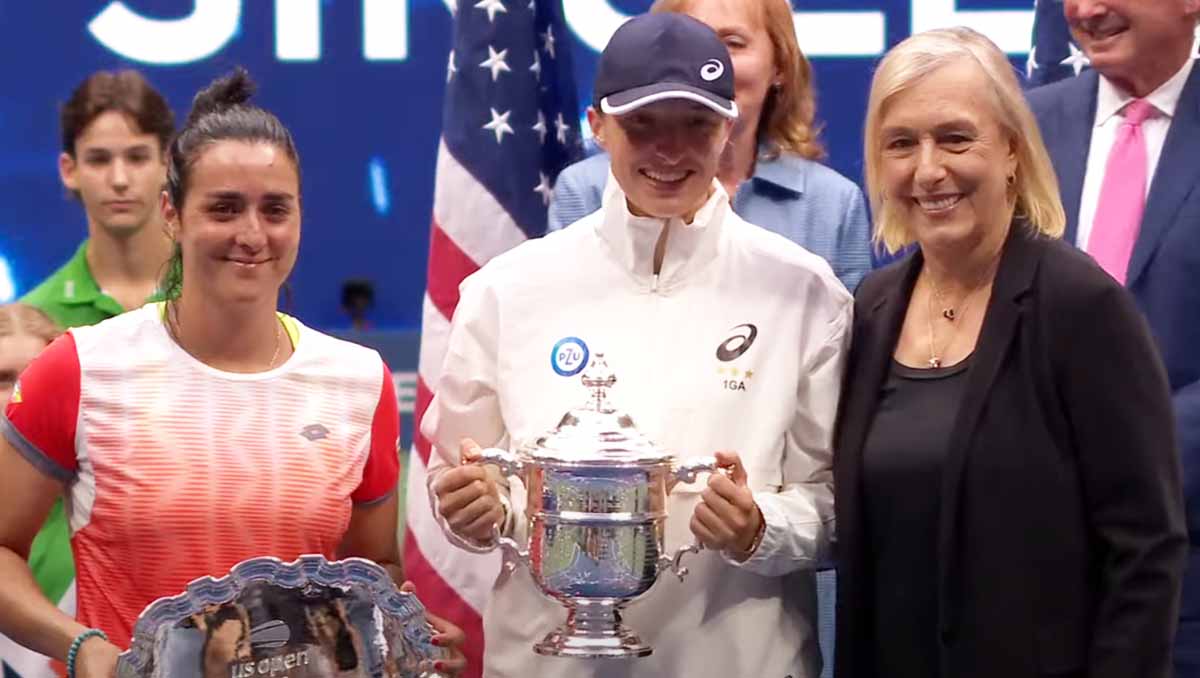 It all came down to the two highest-performing women in 2022, the two who had won the most matches, and would begin next week in the top two places in the rankings.

Both world No1 Iga Swiatek, with a 54-7 run for the season, and the current No5 Ons Jabeur, at 44-13, were also the two who had already sealed their places in the WTA Finals in under two months’ time.

And while both had won junior Majors as teenagers, they had followed startlingly different trajectories to this first Major final meeting.

For Swiatek, she hit the senior heights while ranked 54 and age 19 to win the French Open in 2020 without dropping a set, nor more than five games in any match. Eighteen months later, she won it again, one of a tour-leading six titles this year that included an unbeaten run through four 1000 events, the WTA500 in Stuttgart, and on to Roland Garros.

She rose to No1 before her 21st birthday once Ash Barty retired after the Australian Open, and the young Pole has not looked back. She stood at the top with almost twice as many points as the next woman in line, Jabeur.

The sunny personality and creative tennis of the Tunisian, who has just turned 28, had been creating a buzz all season, and all the more so as she emerged from the women’s Wimbledon draw to reach her first Major final. And she did it with a crowd-pleasing combination of touch, craft and spin, power from the back of the court, and great tactical prowess.

Her journey to the top, knocking off ‘firsts’ for Arab and Tunisian tennis at every turn, had been a slow-burn considering she won the junior French Open back in 2011. She won her first title on Birmingham’s grass just last summer.

Her second and third titles came this year on the clay of the Madrid 1000 and then on the grass of the prestigious 500 in Berlin.

But here was the rub for Jabeur: Swiatek had lost only one of her 10 finals, her first back in 2019. In the nine since, she had not so much as dropped a set, including her last match against Jabeur in the final of Rome in May.

And yet, neither woman had come into the US Open with their best form. Swiatek had made just one quarter-final since the French Open, while Jabeur had not won back-to-back matches since Wimbledon.

That all changed in New York: Both women had been playing increasingly well as they notched up their six wins. Swiatek showed all her fighting spirit and big hitting to get past a determined No6 seed Aryna Sabalenka in the semis, dropping the first set but then sweeping through the next two.

Jabeur had come back from a set down in the third round, but then dropped only four games to one of the in-form players of the summer, Caroline Garcia, in the semis.

In the early stages of the title match, though, Swiatek was in killer mood—as she had been so often before in title matches—breaking to love and holding for 3-0. She had conceded just one point thus far.

Now Jabeur seemed to shake off her early nerves to hold her first game, and then went on the attack to great effect, winners off both wings to get break back points. Another forehand winner, and she had the break, and the already-noisy crowd erupted.

Swiatek upped her attack in response, turning defence into attacking returns, and it earned another break. She held for a 5-2 lead, with her first serve now in a groove—just two first serves missed, 19/21. But it was her returning that was doing so much damage, and she scored another break for the set, 6-2.

The opening two games of the second set were longer and more testing, but Swiatek held off deuce while Jabeur could not, and was broken, 2-0. The Pole had to find the lines to hold off Jabeur again, but slotted a backhand winner to hold.

Then a double fault from the Tunisian brought up more break chances to take her 4-0 down, but this time she held them off.

It would be a pivotal point in the set. The Jabeur serving that had produced 34 aces through the course of the tournament had yet to find one in the final, but she found the pace and depth when she needed it: 3-1. And a hesitant service game from Swiatek pushed the door ajar for Jabeur, who broke, with the crowd making disruptive shouts and whistles.

As before, the Tunisian could not consolidate, was broken back, 4-2. These were edgy games, both going for big shots, but also making errors. Jabeur found some big strikes again to earn more breaks chances, and this time turbocharged to convert: all square again.

Individuals in the crowd were still proving disruptive, and it was affecting the focus of Swiatek. The Pole was up against it again, break points to go behind in a set for the first time. However, she resisted after more than eight minutes, 5-4, and strode defiantly to her chair.

They looked destined for a tie-break, and although Swiatek worked a break point for set and match, Jabeur found her best serving to hold: a tie-break it was. And there, it was tense to the nth degree, both taking the advantage, both throwing it away with errors. Finally, though, Swiatek earned her second Championship point, and saw a Jabeur forehand land long: 7-6(5).

The Pole fell to the court, but quickly jumped up to embrace Jabeur and then run to her box to clasp hands. She was clearly emotional, her voice trembling as she said:

“I wasn’t expecting a lot. Before this tournament it was such a challenging time. Coming back after winning a Grand Slam is always tricky. For sure this tournament was really challenging because it’s New York, it’s so loud and crazy, there was so many temptations in the city, so many people I have met who are so inspiring.”

For Jabeur, it is the second runner-up trophy in two months, but she assured her many fans that she is not satisfied with that:

“Amazing two weeks backing up my final at Wimbledon. I’m going to be working hard and we’ll get that title real soon. I tried to push myself to do more, getting the Major is one of the goals, and hopefully I can inspire more and more generations.”