US Open preview: Will Serena Williams and Maria Sharapova meet on the hard courts of Flushing Meadows? 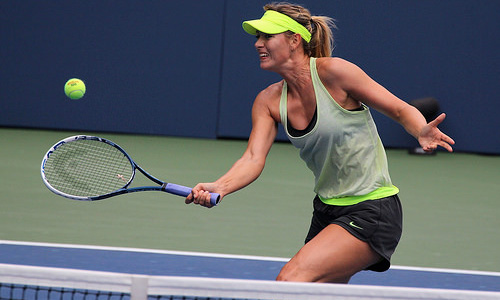 The mighty Serena Williams may have lifted the US Open trophy five times, may have 17 Grand Slams to her name, may be the oldest woman ever to hold the No1 ranking—204 weeks by the conclusion of the final Grand Slam of the year.

Yet until she hit the hard courts of North America this summer, she may not have been quite the hot favourite to claim her 18th Major as she was at the start of the year.

After a surge in form in 2012, she went from strength-to-strength in 2013: Williams simply could not stop winning. She began with the Brisbane title, reached the Doha final, won Miami and Charleston back to back and, after a couple of wins on clay in the Fed Cup, did the same in Madrid and Rome, sealing her clay dominance with the French Open title.

Perhaps it was not surprising that she made, by her standards, a modest fourth-round run at Wimbledon, but she followed it up with the Bastad and Toronto titles, the Cincinnati final and then an extraordinary run to the year’s end, claiming the US Open, Beijing and the WTA Championships without loss.

Just seeing it on the page is enough to exhaust any regular player, but she began this year in fine form too: first the Brisbane title, then Miami and Rome—but a first-round loss in Charleston was a surprise. And usually so dominant on the big stage, she made equally surprising losses at Roland Garros and Wimbledon—in the second and third rounds respectively.

It could have suggested burn-out, except that Serena is cut from a rare cloth. Come Stanford, she was holding the trophy again, in Montreal she lost a gripping semi-final encounter with her sister Venus, but bounced back to win Cincinnati for the first time. It earned her the US Open Series Award for the third time, and was back as favourite to emulate her success at Flushing Meadows, too.

She has won three of the last five titles she has contested in New York, and finished runner-up and semi-finalist in the other two. That is a mountain of a record for any rival to take on, and yet two in the draw have the chance of taking the No1 ranking.

The first, world No2 Simona Halep, has continued to make her mark after a breakthrough 2013 saw her win the six first titles of her career. This year, she has put together a quarter, a semi and a runner-up finish in the three Grand Slams, has won in Doha and Bucharest, was a finalist in Madrid and reached the semis in Indian Wells.

The other is No4 Petra Kvitova, who claimed her second Wimbledon title in July, and arrives in New York on a high, having just won in New Haven.

However for either Halep or Kvitova to reach No1, they must win the US Open—and see Williams fall before the quarters.

But there are other women with the clout and confidence to make their own runs to glory in New York.

The ever-consistent Agnieszka Radwanska has nabbed her own quarter as a result of Li Na’s absence with injury. She has never made it past the fourth round here but has some serious hard-court credentials with the Montreal title and Indian Wells runner-up trophy this year.

It would be foolish to discount the new kid on the block Eugenie Bouchard, seeded No7 having started the year ranked 32—and 2013 at 144. The cool and calm 20-year-old Canadian made her intent clear this season by reaching the semis of all three Majors, reaching the final at Wimbledon.

And then there are some familiar faces who have come back strongly this season after some slips in form.

Former world No1 and US Open finalist Caroline Wozniacki has shown encouraging signs to her many fans, especially on her favoured hard courts. She made the quarters in Miami and the semis in Dubai and Monterrey, and since Wimbledon has won Istanbul, reached the quarters of Montreal and the semis in Cincinnati.

Ana Ivanovic, French Open champion in 2008, has won three titles this year and reached the final in Cincinnati last week (beating Sharapova), to break back into the top 10 for the first time in six years. She leads the tour in match-wins, too.

And what of Victoria Azarenka, losing finalist to Williams in New York for the last two years, twice an Australian Open champion, but absent for a long stretch this year with foot and ankle injury. She made her hesitant return in the grass season with just one win in two tournaments, but reached the quarters in Montreal, only to pull out of Cincinnati with a knee injury.

She really is an unknown quantity, and has been fortunate to make the top-16 seed cut courtesy of Li Na’s absence, but Azarenka needs to reach the semis if she is to stay in the top 20.

Andrea Petkovic has suffered repeated injuries that knocked her out of the top 10 in 2011—the year she reached the quarters in New York—and ended 2012 ranked 143. This year she has climbed 20 places to No19 with the Charleston and Bad Gastein titles, reached the semis in Stanford and at the French Open.

And watch out for the resurgent Williams—Venus this time—who beat her sister for the first time in over five years to reach the Montreal final. She has begun, after years of managing the debilitating Sjögren’s Syndrome that hit her in 2011, to look something like the Venus of old—though she was champion in New York a staggering 14 years ago, in 2000 and again in 2001, and a finalist back in 1997.

There are a few other women who also have the credentials to cause some upsets. No20 seed, Svetlana Kuznetsova, was champion in New York in 2004, runner-up in 2007, and won in Washington this month—and beat Bouchard in Cincinnati.

Roberta Vinci has scored her best Grand Slam runs at the US Open, reaching the quarters for the last two years, and she has made two finals since Wimbledon.

Lucie Safarova reached her first Grand Slam semi at Wimbledon after 36 Majors and stands at a career-high No15.

And few will forget the pugnacious yet captivating tennis of Dominika Cibulkova in the final of the Australian Open. The Slovak also took out strong competition in her runs to the semis of Miami and quarters of Indian Wells.

But leading the race to the WTA Championships is No5 seed Maria Sharapova. The Russian had an outstanding clay run, winning Roland Garros, Madrid, and Stuttgart, and has also been a semi-finalist in Cincinnati and Miami. Interesting, too, is that her practice sessions at Flushing have shown a determination to improve her front-court game—perhaps the key to getting her first win over Williams in a decade.

Sharapova won the US Open in 2006 and has twice reached the semis. Injury prevented her from playing last year, so another semi run could take her back to No2.

But the talk in New York is less of rankings than of the possibility that, come the end of the tournament, she and Williams, the biggest stars of women’s tennis, could play their first-ever match at the US Open.

In hand-to-hand combat, Williams and Sharapova have claimed the most top-10 scalps this year—8-0 and 7-3 respectively. So who in their halves of the draw can prevent that longed-for, first-ever Williams-Sharapova US Open face-off?

Williams’ route to semis
Round 1: Intriguing opener against young American Taylor Townsend
Round 2: A possible meet with 34-year-old French Open champion Francesca Schiavone, whose ranking, like her form, has dropped to No77
Round 3: First seed, and the lowest, No32 Zhang Shuai
Round 4: Most likely the survivor between an eye-catching encounter between No15 Carla Suarez Navarro, quarter-finalist last year, and former champion and 24th seed Sam Stosur
Quarters: Top seed is Ivanovic, who should come through the other seeds in her segment ,Casey Dellacqua, Anastasia Pavlyuchenkova and Flavia Pennetta.
Semi-finalist: Although Ivanovic beat Williams at the Australian Open from a set down, Williams has won their subsequent three matches this year.
Williams advances

Kvitova’s route to semis
Round 1: Like Williams, Kvitova’s first opponent is a tricky one. Kristina Mladenovic beat Li at Roland Garros
Round 2: Should be trouble-free against one of two fellow Czechs
Round 3: Kvitova should survive a tough test in first seed, No27 Madison Keys
Round 4: Azarenka and Kuznetsova may battle for the privilege of a Kvitova match-up, and an undercooked Azarenka may not survive
Quarters: It’s hard to see anyone other than Cibulkova or Bouchard, and despite the latter playing Kvitova in the Wimbledon final, Cibulkova may be ready for another Grand Slam final run
Semi-finalist: This has been Kvitova’s least successful Major, the only one where she has failed to reach the quarters. On a big stage, with a big crowd, Cibulkova may meet and beat Kuznetsova.
Cibulkova advances

Radwanska’s route to semis
Round 1: Should be trouble-free against Sharon Fichman, who has won just three main-tour matches this year
Round 2: One of two Chinese women, also straight-forward
Round 3: A tricky first seed, Roberta Vinci, who beat her here in 2012
Round 4: Also tough—Alize Cornet beat Williams at Wimbledon, but has shown poorer form since, leaving Safarova to advance—and the Czech has beaten Radwanska in their last three matches
Quarters: Angelique Kerber is seeded to take on Jankovic or Sloane Stephens—and more likely the Serb. Jankovic and Kerber have split their last two matches this year, so Jankovic may cause an upset here
Semi-finalist: Jankovic and Radwanska have split their two matches this year, but the Pole won their tough three-setter in Indian Wells.
Radwanska advances

Halep’s route to semis
Round 1: Plays a wild card opener
Round 2: Maria-Teresa Torro-Flor won her maiden title this year but should be no match for Halep
Round 3: First seed is the rising Garbine Muguruza in what could be a must-see contest. The Spaniard has the power game for an upset—and she beat Williams on the clay of Roland Garros, too.
Round 4: In current form, Venus Williams may snatch the fourth round over Sara Errani, and may even advance to the quarters
Quarters: This is where Sharapova will have to show her class. Aside from a tough opener against fellow Russian Maria Kirilenko, her seeds are Sabine Lisicki, and then Petkovic or Wozniacki. Should she survive, she will have a battle against Halep.
Semi-finalist: All three matches between Halep and Sharapova this year have gone the distance, but have also gone to Sharapova.
Sharapova advances

US Open 2014: Gutsy Murray battles past pain and Haase to win opener