Arthur Ashe Stadium will be fitted with a retractable roof in time for the 2017 US Open, the USTA has announced 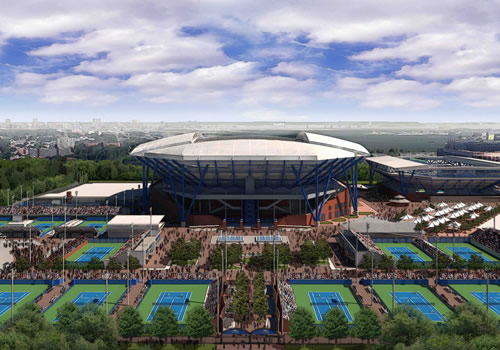 An artist's impression of the new roof on Arthur Ashe Stadium Photo: USTA

Arthur Ashe Stadium will be fitted with a retractable roof in time for the 2017 US Open, the United States Tennis Association (USTA) has announced.

The $550m plans to redevelop large parts of Flushing Meadows were unveiled on Thursday and include the building of two new stadiums at the New York venue.

“We have been working toward a viable design for a roof on Arthur Ashe Stadium for more than a decade,” said USTA chairman of the board and president Dave Haggerty.

“Through a long and arduous process, we feel that we now have a design that meets the criteria of being architecturally sound, aesthetically pleasing, reasonably affordable, and buildable.”

The men’s US Open final has been delayed until the Monday for five consecutive years because of rain, including British Andy Murray’s maiden Major victory in New York in 2012.

The new roof will be constructed of flexible, translucent fabric stretched over a steel frame and supported by eight steel columns surrounding Arthur Ashe Stadium.

Plans were also unveiled for the construction of a new 8,000-seat grandstand stadium, as well as the building of a new 15,000-seat Louis Armstrong arena at Flushing Meadows.

“We have an aggressive construction agenda for the entire National Tennis Center, with a new Grandstand Court built in time for the 2015 US Open, new retractable roof over Arthur Ashe Stadium by 2017, and a new Louis Armstrong Stadium opening for the 2018 US Open,” said Gordon Smith, USTA executive director and chief operating officer.

“We recognise there are many known, and certainly many unknown, hurdles we will have to confront to meet this schedule. We are ready for the challenge and hope we can achieve it.”

The USTA said it will self-finance the entire cost of the transformation through a combination of bonds and revenue generation.