It's been an impressive week for Serena Williams, after securing the year-end No1 ranking following her 32nd birthday 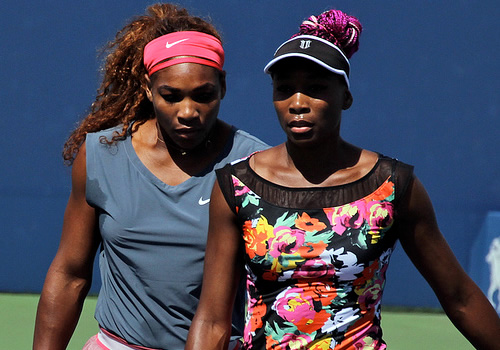 It has been some week for the best player in women’s tennis. Serena Williams celebrated her 32nd birthday just a fortnight after winning her 32nd Grand Slam title at the US Open. And on her special day, 26 September, she was confirmed as the year-end No1, 11 years after she did it for the first time in 2002.

This was a final affirmation that, as the oldest woman to hold the No1 ranking in the WTA’s 40-year history, 2013 has been Williams’ best ever season. Currently on a 67-4 match run, she has won nine titles, including two Grand Slams, six Premier-level titles and her first International title in Bastad.

Even so, this week has belonged almost as much to another remarkable Williams, the elder sister who Serena has called her “inspiration”.

Venus Williams broke onto the tennis stage when she reached the final of the US Open as a 17-year-old in 1997. She then won her first big title in Miami and reached the quarters of all four Majors—indeed the semis in New York—in 1998. She won the Grand Slam Cup a month later, beating Serena.

Her younger sister and best friend would go on to dominate the Grand Slam stage, depriving Venus of more than her seven singles titles. For not only would they join forces on the same side of the net to win 13 Major titles but would regularly face one other across the net. Twelve times it happened in a Grand Slam, eight times in a final—and Serena won six of those finals.

But in 2011, just as Serena was returning from her own long injury absence, Venus was hit by a succession of health problems that seemed destined to draw a line under her long career. First a hip injury, then an abdominal injury, forced her out of most of the first six months of the tour. She played the short grass swing before again falling ill on the summer hard courts, revealing at the US Open that she had Sjögren’s Syndrome. She ended 2011 having played just four tournaments and 12 matches, ranked 134.

In 2012, she could not play until mid-March but showed, when she did return, that she was not ready to throw in the towel. Despite being unseeded, she reached the quarters of her first event in Miami, then the same in Charleston and Rome plus the semis in Cincinnati. She ended the year with the Luxembourg title and a ranking of 24—plus an Olympic gold in doubles.

But 2013 brought more obstacles alongside the new training and dietary regimes needed to manage the Sjögren’s Syndrome. After a semi finish at Charleston, losing to Serena, she made four first-round exits and won just two matches as she wrestled with persistent back problems.

But in the week that her sister pulled out of the Tokyo Premier with fatigue, Venus took a stride back onto the big stage, reaching the first Japan Open semi-final of her career after scoring her first back-to-back wins since that run in Charleston in April.

Ranked 63, and thus again unseeded, she took out top seed Victoria Azarenka, No13 seed Simona Halep, and then the fast-rising talent of Eugenie Bouchard in one of the matches of the tournament, three hours of aggressive all-court tennis

Williams hit 43 winners and, more significantly, a record-matching serve. The scoreboard flashed up 209 kph—129 mph—to equal the women’s record, held by Venus herself.

However, when Venus returned to play Petra Kvitova, the 33-year-old bore all the signs of her long and tough progress to the semis: strapping on her right thigh and on her right wrist. Little wonder, perhaps, after playing two three-setters in a row, the last of them fewer than 24 hours before.

In Kvitova, too, she faced another big-hitting women who, ranked No7 in the race to the WTA Championships, could be a mirror image of the Venus of a decade ago—and they are separated by a decade in their ages.

Each broke the other in the opening games before settling into their rhythm in the windy expanse of Tokyo’s 10,000-seat stadium. But Williams broke again in the sixth in a terrific battle of powerful ground-strokes, net attacks and, of course, big serving.

She took the first set, 6-3, but Kvitova turned the tables in the second, breaking in the fourth game to level the match, 6-3.

Just as in both their previous matches, this would take three sets to decide, and it now seemed inevitable that fatigue, the central component of Sjögren’s, would become a factor for Williams. This was not only her third straight three-setter but she had played one more match than her young opponent, who enjoyed a bye in the first round.

Yet the final set could not have been more tightly contested. Just as Williams had begun the final set against Bouchard on level points—84 apiece—so she and Kvitova began this one on level peggings—74 each after two service holds.

The decisive game was, arguably, the sixth, when Williams had three chances to break serve but could not. At two hours, she had 31 winners to Kivtova’s 23 but had converted just two of 13 break chances in the match, a stat she would rue as they headed to a tie-break.

Kvitova found near perfect tennis to race to a 6-0 lead—helped by a forehand smash into the net with an anguished scream by Williams—and she closed out the match, 7-2.

Kvitova will now take on Angelique Kerber, who beat Caroline Wozniacki in the other semi, having already done her campaign for Istanbul no harm at all.

Meanwhile, Venus will start next week back inside the top 40 and hoping for more ranking points before the seeds for the Australian Open are decided at the start of the 2014 season.

She will take to court again at the big Beijing Premier next week, and has earned a bye in the first round thanks to her semi finish here. What’s more, she is scheduled to play with sister Serena in the doubles—a rare thing these days outside the Majors.

As Serena tweeted during Tokyo: “If u ever think about quitting—just think about my sister @Venuseswilliams She’s the greatest.”

And that from—well, one of the greatest.