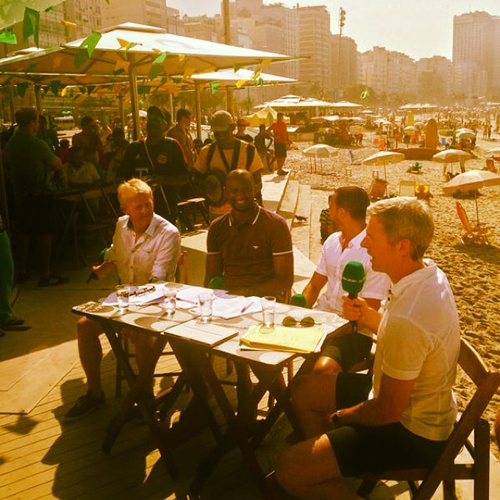 Marouane Fellaini helped inspire Belgium to a second-half comeback as the Manchester United striker scored in a 2-1 victory over Algeria.

The World Cup dark horses fell behind after Sofiane Feghouli scored a 17th-minute opener from the spot, but substitutes Fellaini and Dries Mertens netted in the final 20 minutes to seal three points in Group H.

Here is the best of the Twitter reaction from the professionals, past and present, in chronological order as Belgium move to the top of Group H.

Arsenal legend Patrick Vieira (@OfficialVieira) is doing punditry on the game: “Back to work #worldcup2014”

Former Liverpool striker Neil Mellor (@NeilMellor33) is stunned as Algeria take the lead: “Didn’t see that happening!! Algeria 1up!! Long way to go but this would be a big shock if they hold on!!”

Everton midfielder Darron Gibson (@D_gibson4) wants to see his Toffees team-mate come on for the Belgians: “Belgium need to get Mirallas on! He will cause problems running at people and always has a goal in him!”

Former England international Matt Le Tissier (@mattletiss7) isn’t impressed by the heavily-fancied Belgians: “The dark horses seem to have their blinkers on! #algeria1up”

Ex-Republic of Ireland midfielder Matt Holland (@mattholland8) sums up his thoughts on the match: “An early kick in the Feghoulis for Belgium but they’ve turned it around thanks to Fellaini and Mertens. 2-1 Belgium”

More from Le Tissier (@mattletiss7): “The dark horses have come on strong in the last furlong #blatterout”

And Lineker (@GaryLineker), too: “Manchester United should sign the Fellaini that plays for Belgium.”

Great recovery after first half! That's what great Teams do… pic.twitter.com/gxgAChaozh