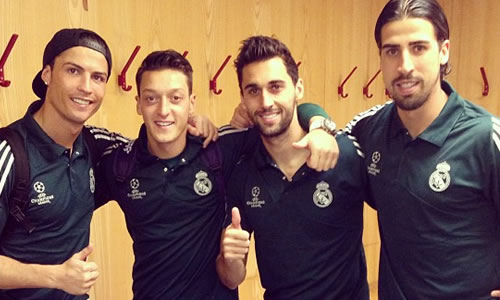 Nani’s controversial red card was the biggest talking point on Twitter after Real Madrid booked their place in the Champions League last eight with a 2-1 victory over Manchester United at Old Trafford.

Sergio Ramos’s own goal had put the Red Devils ahead in the last-16 tie before Nani was dismissed for a dangerous tackle, with Luka Modrić and Cristiano Ronaldo both scoring to seal a 3-2 aggregate win.

Here is the best of the Twitter reaction from the professionals, both past and present, in chronological order to Madrid’s triumph.

Former Liverpool midfielder Jason McAteer (‏@MCATEER4) is surprised by Wayne Rooney’s omission: “Massive call leaving Rooney on the bench. Writing is on the wall. Ferguson always has the last laugh. The only person happy in the Rooney camp is – his agent.”

Well, the striker’s wife Coleen Rooney (‏@ColeenRoo) certainly isn’t happy: “Can’t believe @WayneRooney isn’t starting tonight!!! Don’t know much about football, so not trying to say anything!! Was just excited to watch my husband play in a big game! Hopefully he will.”

Olympian Usain Bolt (‏@usainbolt) is ready to watch his team win: “Let’s do this, my team #MUFC”

Former Sunderland midfielder Michael Gray ‏(@mickygray33) backs Ferguson’s decision to play Danny Welbeck: “Wow what a game this is… Welbeck is like a man possessed..#championsleague”

Swansea’s Wayne Routledge ‏(@WayneRoutledge) isn’t impressed by Los Blancos: “Real Madrid got to do way more… Ronaldo been missing so far, Man United tactics spot on! But it only takes one chance…”

AC Milan’s Kevin-Prince Boateng ‏(@KPBofficial) can’t believe Nani’s red card: “How can you give a red card for that??? Is he serious….??? That’s sad killing a big game like that… #ManUvRealM”

Norwich midfielder Anthony Pilkington (‏@Pilkington_11) reckons the official is an attention seeker: “What is the ref doing!!? This clown loves a red card!! Why do some referees think the games about them!! #headsgone”

Dutch legend Ruud Gullit (‏@GullitR) says the game has been ruined: “ Unbelievably bad decision by the ref. The red card changed the whole game for #manchesterunited…”

Spurs youth star Alex Pritchard (‏@pritch_93) is delighted for his former team-mate: “Luka buzzing for him!!!!!!!”

Southampton’s Luke Shaw ‏(@Luke_shaw3) reckons the Croatian midfielder has made a telling impact: “What a goal, since he has been on, he has changed the game for Madrid!”

Marseille midfielder Joey Barton (‏@Joey7Barton) reckons he can see a tear in Ronaldo’s eye: “Was Ronaldo crying then? Seriously, am sure he was crying two minutes after he scored. Was I seeing things?”

Reading striker Jason Roberts (‏@JasonRoberts30) says there is no doubt it wasn’t a red card: “Some people may not like United..or are supporting Real or whatever..but..if you think that’s a red you need to give your head a shake…”

Arsenal fan Piers Morgan ‏(@piersmorgan) is in a joyful mood on Twitter – for once: “Van Pursestrings doing a lot of air-shots tonight. He does realise you have to connect with the ball, right?”

Ex-Liverpool defender Neil Ruddock (‏@RealRazor) is looking forward to Sir Alex Ferguson’s post-match interview: “Watching this game to the end Fergie will be fuming, could come on the pitch I reckon!!!”

West Brom goalkeeper Ben Foster (‏@BenFoster) will be kept waiting as an enraged Ferguson refuses to speak to the media: “This post-match interview will be interesting….#robbed”

Roy Keane says the referee was right to send off Nani, and England cricket star Alex Hales (‏@AlexHales1) won’t be disagreeing with the former United captain: “I’m not arguing with Keane, if he says the sky is pink, it’s pink! #cannon”