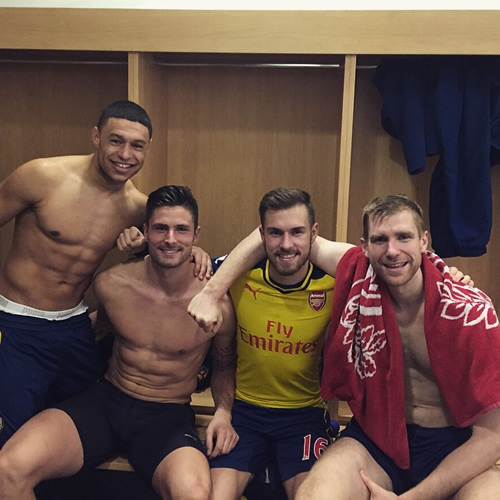 Aaron Ramsey is out with a hamstring injury Photo: Instagram

Aaron Ramsey will miss Arsenal’s trip to Crystal Palace in the Premier League on Saturday due to a hamstring injury, Arsene Wenger has confirmed.

The Gunners midfielder suffered the problem during the 2-1 win over Leicester City earlier this month and has not recovered in time for this weekend’s clash at Selhurst Park.

Wenger said that Ramsey is just under two weeks away from being fully fit again for the Gunners, and the Frenchman also confirmed that there were question marks over the fitness of Mathieu Flamini (hamstring) and Hector Bellerin (ankle).

Speaking to Arsenal’s website, Wenger said: “Ramsey is still out. The two other injuries are Arteta and Debuchy.

“He [Ramsey] is nine days into his three-week rehab.”

The Arsenal boss also confirmed that Alex Oxlade-Chamberlain, who has been struggling with a groin injury, is approaching a return to fitness and returned to full training on Thursday.

He added: “We have some uncertainties about Flamini and Bellerin – they are doubtful for Saturday. Bellerin is his ankle and Flamini has a tight hamstring. We’ll see. We’ll have tests tomorrow [Friday]. Everybody else is OK.”