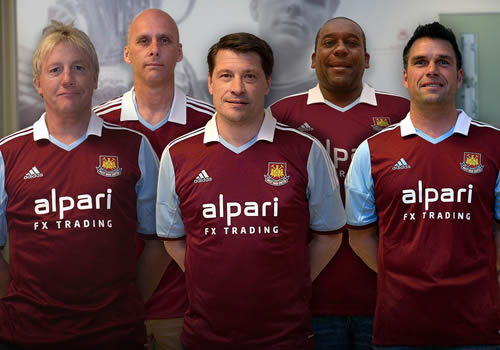 The new adidas strip was unveiled on Thursday Photo: whufc.com

A host of West Ham United’s famous ‘Boys of ’86’ have been reunited to take a first look at the club’s new adidas home kit.

Strikers Tony Cottee and Frank McAvennie, midfielder Alan Dickens and defensive duo George Parris and Steve Potts were all part of the team which fired the Hammers to their best-ever league finish of third in the 1985/86 season.

The club was clad in an adidas strip that season, and are now back in the popular iconic three stripes 27 years on, as Sam Allardyce’s current crop of Hammers look to build on last year’s impressive tenth-place Barclays Premier League finish.

The home kit was unveiled on Thursday and features the logo of the club’s new principal sponsor Alpari on its front, after the global forex broker joined forces with the Hammers to expand their sponsorship agreement earlier this year.

Two of the standout members from the 1985-86 squad were strike partners Cottee and McAvennie, who notched 46 league goals between them as the Hammers finished just four points behind champions Everton.

Cottee would go on to score close to 150 goals for the club and he is sure the new kit will evoke memories of that fine spell in Hammers history.

Cottee said: “The adidas kits we had in the 1980s were iconic. Not just the one in 1986, and it’s great for the fans that whatever era you associate yourself with you can put the top on.

“1986 was a special season and I didn’t realise that [era] was the last time we wore adidas. This is the first chance I’ve had to look at the new kit and I’m really impressed.

“It’s a really nice kit and I think it will sell well.”

Scotsman McAvennie, who arrived at the Hammers in the summer before that unforgettable campaign, contributed 26 of those 46 goals, and he would love the modern-day Hammers to take similar inspiration from their “Alpari FX Trading”-branded new kit.

The Glaswegian forward said: “It would be great if it can bring us a bit of luck like it did that season, because we did well and played some great stuff.

“The kit is superb. The boys should run out there and be honoured to wear this jersey. Even putting it on now I’m honoured to do it, so I’m sure from the first team squad to the Under-21s and everyone downwards, they will be honoured too.”

Arsenal transfers: ‘Wenger should break the bank to sign Rooney’