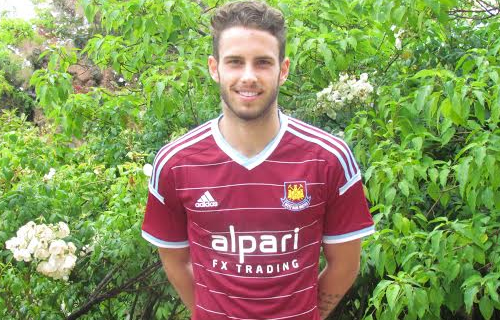 West Ham United have confirmed the signing of midfielder Diego Poyet on a four-year deal.

The 19-year-old joins the Hammers following the expiry of his contract at Charlton Athletic, after the two clubs agreed an undisclosed compensation fee for his services.

Poyet, the son of Sunderland manager Gus, burst into the Charlton first-team in January, making 23 appearances during the second half of last season to earn the club’s player of the year award.

It’s massive to come to a Premier League club. It’s what I wanted to do

“I’m very happy to be here. It took me by surprise a little bit and it all happened very quickly,” said Poyet. “It’s a great club to be at and I know a few of the boys here already.

“It was a no-brainer to sign, I wanted to come out here to the training camp as soon as I could and I’m grateful that they’ve had me here.

“It’s massive to come to a Premier League club. It’s what I wanted to do – I wanted a new challenge and soon as I heard there was a chance of stepping up I had to take it.

“I played quite a few games last season with Charlton and I just want to push on now.

“Like any young player, the first thing you want to do is get into the first team. I need to show the staff, players and the gaffer what I’m capable of doing and maybe pushing my way in.

“West Ham is a great club with a lot of tradition, moving to a new stadium and everything, it was a no-brainer for me because you never know if you’re going to get that kind of chance again.”