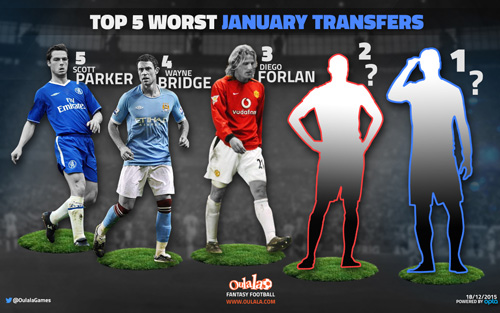 Who will top Oulala's list of the worst January signings? Photo: www.oulala.com

It’s almost that time of year again. The time for clubs to get rid of the deadwood and attempt to invest in someone who will light up their second half of the season.

And yet so many clubs get it wrong. The January transfer window is filled with overpriced players and flops.

Here, we count down the top-five worst January transfers. For this list, Oulala.com are only including players from clubs that are currently in the Premier League.

Kicking-off the list at number five is Englishman Scott Parker during his brief stay at Stamford Bridge. The £10m signing from Charlton lasted just 18 months with the Blues, making a total 28 appearances in all competitions. His only goal came in a 2-0 away league win over Portsmouth at Fratton Park in February, 2004. The following season, with the introduction of Chelsea signing Arjen Robben, Parker continued to struggle to get first team action making just four league appearances of his 15 overall. He was then sold to Newcastle where he was able to get considerably more game time. At 35, Parker is currently playing for Championship side Fulham.

In 2009, Wayne Bridge was originally signed by the then Manchester City manager Mark Hughes. During his time with City, people perhaps remember him most for his much publicized feud with John Terry rather than for his footballing credentials. In December 2009, Roberto Mancini was unveiled as the new Manchester City manager after the sacking of Mark Hughes. The following season, Bridge made only three appearances for City as he was loaned out to West Ham. The season after Bridge made even less of an impression for City making no appearances as he was loaned out to Sunderland where he featured just 8 times for them. Meanwhile, Mancini had signed the likes of Aleksandar Kolarov in 2010 and Gael Clichy in 2011 thus indicating that Bridge was surplus to the manager’s requirements. In July of 2012 Bridge was loaned out yet again this time to Championship side Brighton & Hove Albion. In the end Bridge made just 42 appearances for City. In June of 2013, he finally got rid of City once and for all by signing a one year deal with Reading where he made 12 appearances before retiring at the end of the season at the age of 33.

At the age of 22, Diego Forlan signed for Manchester United from Uruguayan club Independiente. The young forward would eventually go on to great things with Villarreal and Atletico Mardid but not with United. Indeed, Forlan struggled to adapt to life in England, scoring just 10 goals in 63 league appearances over a United career that spanned two and a half years. During his first half-season at the club, Forlan made 18 appearances in all competitions yet failed to register a single goal. His best season at United was still far from anything special, making 45 appearances and scoring nine goals in all competitions. The following season at the start of the 2003/4 campaign, he played seven league games before scoring. During the 2004/5 season, United’s first league game away at Chelsea would turn out to be Forlan’s last as he moved to spanish side Villarreal. United lost that game 1-0.

Perhaps if there was not such a hefty price tag attached to him and perhaps if he had not become the most expensive English signing to date then perhaps Andy Carroll might have got away with his performances at Liverpool. No doubt it did not help that he was completely overshadowed by his then fellow teammate Luis Suarez, who also happened to be some £13 millions pounds cheaper. All this, accompanied with his fine performances at Newcastle the season before, carried a huge weight of expectation on Carroll’s shoulders that he never lived up to. The club’s most-expensive signing spent just two and a half seasons with Liverpool, scoring just six goals in 44 appearances. His best moment for the Reds was a League Cup semi-final goal against Everton which sent them through to the final. However, overall Carroll turned out to be a disappointment. After going on-loan to West Ham at the beginning of the 2012/13 season he eventually moved there on a more permanent deal.

From Kop hero to Chelsea flop. Switching allegiances to rivals mid-way through a season is always a risky business. At the time, Liverpool fans would have been fuming but they would soon be laughing. Torres’ ridiculous transfer fee brought to Liverpool the likes of Luis Suarez (then again it also brought in Andy Carroll but the less said about that the better). During his first half-season, Torres managed just one goal in 18 games for the Blues. Overall, with Liverpool, Torres managed to score 65 goals in 102 league appearances whereas with Chelsea the Spaniard only managed a lowly 20 goals in 110 league games. That means that throughout his whole Chelsea career, Torres scored less league goals than in his opening season with Liverpool (24). So you get the idea. One of Torres’ brighter moments for Chelsea was a goal in a Champions League second leg semi-final against Barcelona which saw the Catalan giants eliminated from the competition. However, with his price tag and a Chelsea career that spanned over three years, these moments were too few and far between. Torres was loaned out to AC Milan on a two-year deal before the start of the 2014/15 season. The 31-year-old is currently playing for Atletico Madrid on-loan from Milan.