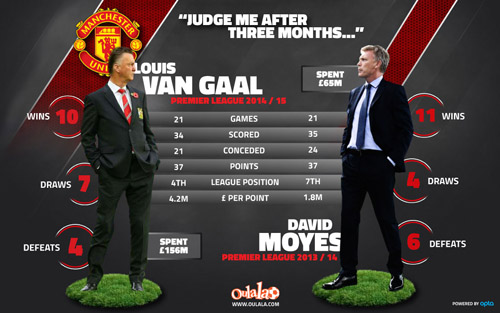 Louis Van Gaal told us to judge him after three months.

Well it’s now been five, and the fact is that there has been little improvement at Manchester United since the manager’s arrival at Old Trafford in the summer despite the millions spent by the Dutchman.

If David Moyes’ United had failed to produce a single shot on target, as happened on Sunday in United’s 1-0 home loss to Southampton, the Scot would have been lambasted by the fans and media alike.

It appears United’s top-four league position is essentially the only thing keeping Van Gaal in a job.

Our friends at www.oulala.com fantasy football have taken a detailed look at the two managers records after 21 games.

Van Gaal’s United have the same amount of points as Moyes’ side did just 12 months ago. With 37 points this season, United sit fourth, however last term, it was only enough to see Moyes’ team languish in seventh.

This is much to do with the form of both Arsenal and Liverpool this season.

Yet the new attacking talent has in fact scored one less goal this season than the team did last season. In transfer fees, United have spent £4.2m per point earned this term compared to only £1.8m under Moyes.

When questioned after the latest defeat by Southampton, Van Gaal reacted angrily when he was asked about the progression of his team.

“So, you have waited until the moment you can ask this question? At the moment I have less, or the same points as David Moyes? Does this mean I haven’t made the team better?” Van Gaal said.

It is highly unlikely that tally will be enough to gain Champions League qualification this season, and with the likes of Arsenal and Tottenham breathing down their neck, Van Gaal’s side have a big fight on their hands in the second half of the season.