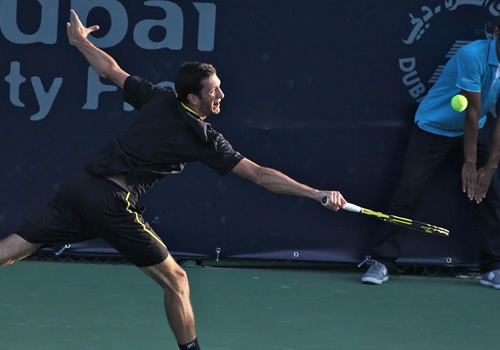 It’s a rare day and a rare tournament when all three Wild Cards make it through their opening matches and into the second round. Even more rare when all three are ranked significantly lower than their first-round opponents.

But that is just what happened in the opening days of the Dubai Duty Free Championships, and what’s more, one of them was guaranteed a place in the quarters. In the random throw of the draw, two were drawn to meet each other and, in another twist in the tail, these two were the closest thing to ‘home’ players as the tournament could get.

The 144-ranked Malek Jaziri of Tunisia and No78 Somdev Devvarman of India beat, respectively, Igor Sijsling and Juan Martin del Potro to set up a popular battle that earned the opening spot on Centre Court. Admittedly Devvarman’s win came after he won a first-set tie-break against an injured Del Potro—and the Argentine was forced to retire before it could be played to its conclusion—but it took him to the second round here for the second year in a row.

The Indian was favoured to advance, arriving as he did with a surge of form and ranking—103 to 78—after two Challenger semi-finals and a title on home soil during the previous three weeks. But to the delight of Dubai, it was Jaziri who advanced, in straight sets, to meet No7 seed Philipp Kohlschreiber.

The third Wild Card was Briton James Ward, benefiting from Dubai’s huge British population but also, he revealed after sealing a tough win to the second round, helped by some links of his own to the city.

I’m not looking at the money, though it’s a big help – the main thing is your points

“I’ve been coming to Dubai for a few years. My ex-girlfriend lives here and I got introduced to a lot of people here who are big fans of Arsenal, and so am I!”

Whether that helped his cause or not, he was delighted to learn that he had been admitted to the Dubai qualies—except when he arrived here, his name had been crossed off the list. For someone without financial backing, this looked like an expensive mistake—until the tournament office confirmed that he had not been crossed off but upgraded to the main draw.

The money was obviously important, but he was very quick to stress that it was secondary to the ranking points that come from playing a big tournament after a couple of seasons dominated by Challengers and qualifying rounds.

Ward looked on his way to the top 100 after Wimbledon in 2012, when he beat the 36-ranked Pablo Andujar in five sets before losing to No12 Mardy Fish in another tight five-setter. But a fractured wrist forced him off the tour for six months:

“People overlook the fact that I had glandular fever [at the end of 2010]… then I won a round at Wimbledon, lost out to Mardy Fish in five, then fell over in Newport practising, broke my wrist, out for six months. Your ranking goes down… Suddenly when I came back, I’m not starting at 140, I’m at 280, so you’re playing a different level of tournament not through choice but because that’s how it is.

“You have to work hard and sometimes those [Challenger] tournaments are harder than these—the pressure, the scrapping to get points.”

Last year brought encouraging highlights, though: two Challenger finals and a title in Lexington. But it has been Ward’s Davis Cup performances, contributing to Great Britain’s return to the World Group this season, that have put his name into British headlines. Last spring, he lost one rubber and won the next, both in five sets, against superior ranked Russian players.

Then he played a memorable singles rubber against No49 Sam Querrey at the start of this year, though at two-sets-to-one down and 2-4 down in the fourth set, the odds looked very much in the American’s favour. However, the Briton finally broke not once but five times to win 10 of the last 11 games, claiming a gutsy victory, 1-6, 7-6, 3-6, 6-4, 6-1.

So he hopes he has done enough to earn his place in the quarters against Italy: “Hopefully Andy plays, hopefully I get picked as well: I’m backing myself to play after winning the last match and what I’ve done in the last four years. It’s the finals, it’s a good tie away from home. They are not two guys [Andreas Seppi and Fabio Fognini] that you can’t beat.”

Ward has been working with a new coach, Australian Darren Tandy who also works with Russian Dmitry Tursunov. The Russian theme has been strong here, with Ward’s first opponent being the 60-ranked Teymuraz Gabashvili. He dropped the first set but came back strongly in the second with a more aggressive game, and sneaked the match in a close tie-break in the third. It earned him another Russian, the altogether more dangerous No6 seed, Mikhail Youzhny.

It certainly looked as though this would be a straightforward win for the Russian in the first set. Youzhny plays a very different style of tennis from his compatriot, with variety, plenty of touch, slice and angle. It seemed to take Ward time to adjust, by which time he was two breaks and a 6-1 set down.

As the second set stretched out in a tight, tense and high-quality match, with each man slicing and dicing and mixing it up, the crowd burst at the seams: There was not even standing room. Ward held off break points at 4-4, Youzhny held from deuce at 5-5, and then broke Ward to serve for the match.

Still it was not done: Ward broke back to push a tie-break but Youzhny took a firm hold to take the set, 7-3.

Ward will be disappointed that he could not take this one, but he will surely, in retrospect, recognize that he played some good, competitive tennis to push a high-ranked man very hard indeed—as he has done before.

Now he will check his ranking after the weekend and hope for the chance to play Indian Wells. And with the two North American Masters out of the way, it will be back to clay and to Davis Cup.

Don’t be surprised if he plays another five-set thriller.