Marianne Bevis looks at the women's draw at the Miami Masters, where all but one of the top 32 are in action 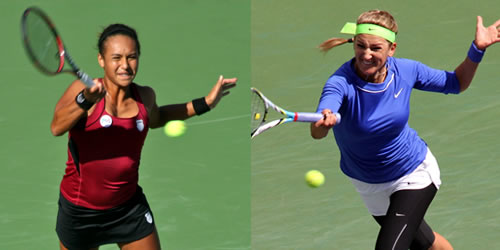 Heather Watson takes on world No1 Victoria Azarenka in round three in Miami Photo: Marianne Bevis

It could, in truth, be a Grand Slam, such is the line-up in Miami for the Sony Ericsson Open—one of the biggest, brightest and most popular tennis events on the tour.

In a 32-woman draw, only one top-32 woman is missing: Andrea Petkovic has been absent from the scene with a back injury since early January.

And for added spice, buried among the non-seeds are two of the most popular and successful women of the last decade making returns from injury—both Grand Slam champions and former No1s: Kim Clijsters and Venus Williams.

Clijsters is a four-time Major champion and has also twice won the Miami title, in 2005 and 2010. This is billed to be her last year in the sport she has lit up since joining the pro circuit in 1997, and she will hope to add to her 42 titles and 636 professional matches by its end. But already Clijsters’ 2012 has been marred by injury, just as much of 2011 was.

The 28-year-old Belgian is making her first appearance this year since losing a dramatic three-setter in the semis of the Australian Open to Victoria Azarenka. As defending champion, Clijsters had already beaten No6 Li Na and No1 Caroline Wozniacki before succumbing to Azarenka, but an ankle injury prevented further progress until Miami.

So not surprisingly, Clijsters made a slow start against one of the most talented players outside the seeds, Jarmila Gajdosova, losing the first set 4-6 before sweeping 12 of the next 13 games.

Her second opponent was the ever-improving Julia Goerges, No14 this week but no measure for Clijsters. The second set may have lasted more than an hour, with multiple breaks of serve, but the former champion made it through in straight sets.

The curse of the non-seed, of course, is that the big challenges stack up round after round. Clijsters’ next has No23, Yanina Wickmayer and, beyond her, Wozniacki once again. Should she make it to the quarters, her problem becomes even more formidable: the prospect of five-time former Miami champion, Serena Williams.

Williams has missed the last two years at this event due to injury and illness, and this year is her first appearance since the Australian Open. Not that it showed: She conceded just three games against her third-round opponent, No21 seed Roberta Vinca.

However, the biggest headlines in this first week in Florida have been stolen by Williams’ elder sister, the woman who beat her to the title here 13 years ago.

Venus Williams, 31 years old and ranked 134 in the world, has been absent from the tour—apart from a doubles win at the Fed Cup in February—since pulling out of the US Open back in August with the debilitating virus, Sjögren’s Syndrome.

And who should she find herself drawn against but the other half of one of the matches of 2011, Kimiko Date-Krumm. The two women, boasting 72 years between them, went to 8-6 in the third set at Wimbledon in their first ever meeting. In Miami, after her long break with illness, Venus may have expected a similar test but in the event, she ran out a 6-0, 6-3 winner.

Just as for Clijsters, though, big seeds stood in Venus’s way, and few are bigger than the 2011 Wimbledon champion, Petra Kvitova. With a similar big serve and forehand game, it promised to be a fascinating match-up between two tall, rangy women separated by a decade in age but very little in their playing style.

However, Venus, a title winner in Miami 14 years ago and twice since, and a finalist as recently as 2010, produced a stunning performance in the third set, a 34-minute tour-de-force of 6-0. She announced afterwards: “I was definitely pretty pumped out there—could you tell?” The answer to that would be ‘yes’.

It’s been a hard journey for Williams, who has changed her diet and her off-court life to combat her illness “but the price to pay is worth it.” And it has now taken her to 600 career wins.

With a non-seed in the next round—Aleksandra Wozniack—she also looks likely to roll on, and will certainly fancy her chances beyond that, too: either No15 Ana Ivanovic or No20 Daniela Hantuchova.

Another unseeded giant-killer, even if the giant was not quite of the scale of Kvitova, has come in the shape of the sunny young British woman, Heather Watson.

Watson, with a wild card in Miami, almost didn’t make it past the first round, coming back from 5-0 down in the third set to beat Sorana Cirstea. But still more impressive was her second-round victory, a storming win for the loss of just three games to No25 Lucie Safarova. It’s a great return of form for the young woman who broke the top 100 last year but started 2012 hampered by an ankle problem.

To progress any further, though, Watson will have to become a giant-killer par excellence for she faces Azarenka, the world No1 who is unbeaten so far in 2012. It is particularly ill fortune because Watson was drawn against the same woman in the first round of the Australian Open: She won just a single game.

The impressive woman from Belarus is now on a 24 match-winning streak that has seen her win all four tournaments she has played this year, including the Australian Open.

The quality of her tennis and the state of her confidence suggest that there is no-one who will break that run any time soon, though Clijsters ran her close in Melbourne and Azarenka has not played Serena Williams, who beat her in both meetings last year, in 2012. Both Clijsters and Williams lie in the bottom half of the draw, so either could become the final test in Azarenka’s pursuit of retaining her Miami title.

First, though, is Watson, and Azarenka paid her teenage opponent a great compliment ahead of their second meeting of the year.

“She’s definitely a fighter. I think she’s a great player and I really like her as a person—she’s always smiling. I’m sure she’s going to be motivated and will try to come up with her best tennis. I look forward to it.”

So the unseeded, both great and still-to-become great, have made their mark in Miami. But come next week, will any of them have broken Queen Victoria’s run?