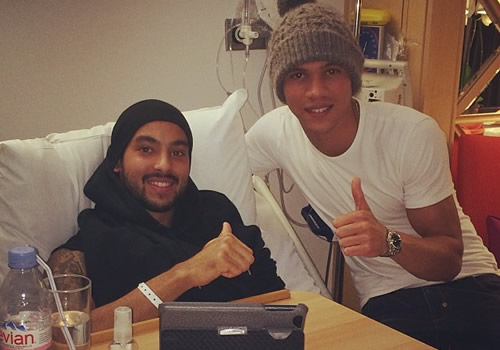 Jack Wilshere and Kieran Gibbs are among the Arsenal players to have welcomed Theo Walcott to Twitter after the forward joined the site on Wednesday.

Walcott is currently recovering from the knee injury which ruled him out of the second half of the season and caused him to miss the forthcoming World Cup in Brazil.

Within two hours of posting his first tweet, the 25-year-old had attracted more then 82,000 followers.

Here is the best of the reaction to the England international’s arrival on the site.

The man himself Theo Walcott (@theowalcott) posts his first update on the social networking site: “I know I said I wasn’t gonna join twitter ………I changed my mind!

His Arsenal and England team-mate Jack Wilshere (@JackWilshere) is pleased: “Finally my boy Theo is on twitter…..after years on trying he has given in to #FanPower give him a follow @theowalcott welcome mate!”

Gunners defender Kieran Gibbs (@KieranGibbs) is also quick to welcome the latest of his club team-mates to the site: “Welcome to twitter my partner in crime!! @theowalcott”

And finally, golfer Justin Rose (@JustinRose99) chimes in with his welcome: “Please all welcome my golfing buddy @theowalcott Another Arsenal player for @piersmorgan”