Andy Murray looks ahead to Wimbledon: “Every time you go to the big events you feel you want to prove yourself again." 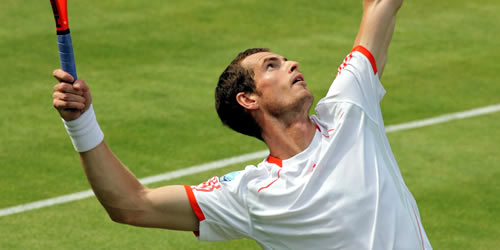 With Wimbledon on the horizon, hopes for Andy Murray will again crescendo during the last few days before the tennis world’s finest take to the grass at the historical home of their sport.

Many are already fine-tuning their grass games on the practice courts in SW19, some continue to run the gauntlet of qualifying rounds, and others have opted to play at one of the scarce ATP or WTA grass tournaments on offer in the fortnight between the French Open and Wimbledon.

So Rafael Nadal and Roger Federer played at Halle last week while Murray and Jo-Wilfried Tsonga opted for the Queen’s Club. This week, David Ferrer has picked the Dutch grass of ‘s-Hertogenbosch and Richard Gasquet is at the old-fashioned Devonshire Park on England’s south coast.

A few, though, choose to supplement their practice sessions with some informal competition at one of the small venues around London that can offer just the right pristine conditions they will face at Wimbledon.

The top man in tennis is following this very route, avoiding heavy combat in favour of training sessions at the All England Club and an exhibition at The Boodles at Stoke Park. That his opponent when he takes to court tomorrow—Thursday—will be Andy Murray adds just a little more wow factor.

The two men, Nos 1 and 4 in the world, are both friends and foes, born within 10 days of each other, and tracking one another’s careers and rankings.

In the last year, of course, the Serb’s career rose to a level that took him ahead not only of Murray but also of Nadal and Federer, becoming the outstanding achiever of the last 18 months.

The close rivalry between Murray and Djokovic has notched up 13 meetings in the heat of full competition, including three times this year—and most memorably in the semi-final at the Australian Open. It took little short of five hours to decide the outcome in Djokovic’s favour in a 7-5 fifth set, but Murray went on to beat the Serb in Dubai.

Thus far, they have never played one another on grass: Another reason why their friendly encounter at The Boodles will be fascinating.

Another issue resting on Murray’s shoulders is what happened last week at the Queen’s Club. He headlined the Aegon Championships as defending champion but made an unexpected exit in his first match against Nicolas Mahut.

There have been a few injury niggles in recent weeks, too, though he assured the waiting media at Stoke Park today that “everything is fine”. But during the clay swing, he withdrew from Madrid with a back problem and, on his return in Rome, he still carried some discomfort, notably in his losing confrontation with Richard Gasquet.

During Roland Garros, things still appeared to be less than perfect so, in retrospect, some extra time for recuperation and grass-specific training outside of the competition at Queen’s may have been a blessing in disguise.

His tune has certainly improved since his London exit. Then he concluded: “Normally I haven’t found [the clay to grass] transition too bad, but I did struggle with my movement especially earlier on in the match. That’s something that I will need to improve.”

After playing Janko Tipsarvic—and his loss in the final match tie-breaker carried little significance—he was much more positive.

“I moved much better than I did a week ago at Queen’s, not slipping around so much. I’m hitting the ball really well, practice has been very good the last few days, I got some good quality matches in. I’ll get another one here tomorrow, and then obviously go back over to Wimbledon and spend two of three days there.”

He went on to talk a little of the pressure of expectation, and seemed fine on that count, too: “The first time I played at Wimbledon there was no pressure: I was 18 years old, and I wasn’t expected to do that well.

“Once I started to get to 21 or 22, it was fairly challenging because the expectations rise, and you’re putting more pressure on yourself. I’m probably more used to it now than I was a few years ago, but it was definitely much less pressure at the start.”

Now, having reached the semi-finals of all four Grand Slams, as Murray did last year, the expectations will be far from diminished:

“Every time you go to the big events you feel you want to prove yourself again, and I’ll try and do that at Wimbledon.”

Murray has not been the only Briton getting in some valuable grass-work this week. At Eastbourne, three women in the main draw became two in the second round after Anne Keothavong went out to No8 seed Daniela Hantuchova.

Heather Watson, ranked 110 in the world, lost her second match to the No7 seed having beaten Greta Arn in her opener, while teenager Laura Robson impressed by qualifying and then beating world No49 Maria Jose Martinez Sanchez in the first round. She was beaten by Ekaterina Makarova of Russia in Round 2.

Robson has been granted a wild card for the Wimbledon main draw, where she will join Keothavong, Watson and Elena Baltacha, who have qualified by right. Other wild cards have gone to Naomi Broady and a new name on the British roster, Johanna Konta. The Australian-born 21-year-old was given British citizen last month to rank her sixth among British women.

On the men’s side, Jamie Baker reached Round 2 for the second straight week but fell to the classy world No34, Philipp Kohlschreiber.

Baker, too, has a wild card for the Wimbledon main draw, along with Oliver Golding, Josh Goodall and James Ward.

Three further Britons are seeded in the men’s doubles: Colin Fleming and Ross Hutchins are at 13 while Jamie Murray, partnering Eric Butorac of the USA, is at 14.