Andy Murray beats Ivo Karlovic in four sets, while a valiant display by James Ward is not enough to overcome Mardy Fish 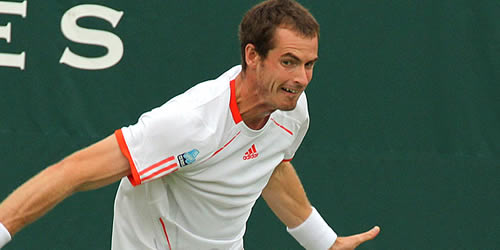 Heather Watson had already thrown down the gauntlet to her fellow Brits with a new landmark at Wimbledon.

By winning her second match, she became the first British woman to reach the third round at Wimbledon since Elena Baltacha a decade before, and it was for the men to try and do the same.

Andy Murray and James Ward were both in second-round action and aiming for a similar 10-year target. Not since 2002 had two British men reached the third round of any Grand Slam: Tim Henman and Greg Rusedski at the US Open.

In truth, though, what looked a perfectly achievable aim for Murray looked a near-impossible one for Ward. The 173-ranked Brit was up against world No12 Mardy Fish who, in an outstanding 2011, reached the Wimbledon quarters and took himself inside the top 10 for the first time.

The American, though, was playing in his first tournament since April after surgery for a heart condition. If there was ever a chance for Ward to win only his second tour-level match of the year—his first was in Wimbledon’s first round two days ago—perhaps it was now.

Murray’s was not an enviable second match, however, played against the towering 6ft 10in Ivo Karlovic who has one of the most dangerous serves in tennis. Indeed he averages more per match than any man other than Milos Raonic. What’s more, he reached the quarter-finals here in 2009.

However, Murray had played and beaten the 33-year-old Croat in all three previous meetings, though two of those best-of-three matches had included two tie-breaks.

For Murray scores over Karlovic in his speed, movement and variety, so it was therefore with some surprise and much murmuring from the crowd that Karlovic broke in the opening game.

Another shockwave went round the court at an opening 130mph ace from the Croat, but the second point was a Murray winner, as was the third and fourth for two break point chances. When a Murray volley clipped the net to pass Karlovic, the break was complete and order restored.

It stayed that way, with not a break point in sight until the 10th game, but three chances to take the set went up in a puff of three 130+ serves and a serve-and-volley winner.

Murray, though, got another bite of the cherry with a backhand winning return of serve down the line, and a double fault—revealed only by Hawkeye—gave him the set, 7-5.

Across the park was Ward who, in a counterpoint to Murray, had gone a set down to Fish, but back on Centre, the second set unfolded in a less dogmatic way. There were fewer love holds and both men survived deuces in the fourth and fifth games.

Along the way, there were numerous nimble exchanges to keep the fans engaged: Karlovic serve-and-volleyed when possible, picked smashes out of the air and dropped short angles with great finesse, while Murray pounced, threw in lobs and ran the long legs of the Croat ragged.

Eventually, Karlovic again found himself serving to stay in the set at 4-5 and this time, he stayed the course to a tie-break dominated by serve. Just three points of the 12 extended into rallies and the last one, with Murray serving, saw Karlovic pick off a touch winner to take the set.

Meanwhile, in a mirroring of British fortunes, Ward had come back to win the second set against Fish at almost exactly the same time. Now was the time for every home fan to develop a split personality.

It was time for Murray to up the ante. He earned a break point in the first game of Set 3 with a pitch-perfect lob winner and took his chance, breaking again in the fifth with a quick-fire exchange at the net. He served out the set with ease, 6-2, just as Ward, dropped his third set across on Court 1.

Karlovic was in no mood to give in easily, though: 130-plus serves rained down, the big Croat raced to the net at every opportunity, picked off smashes and pushed away neat volleys, while Murray served big, retrieved like a terrier, threw up lobs and slotted backhand cross-court winners.

With not a break point in 50 minutes, it headed to another tiebreak and another tight affair with ne’er a point separating them until the last moment. Karlovic, continued to attack to the bitter end—he made almost 100 net plays in the match—but called for the last of a number of foot faults, he double faulted. The crowd knew that Murray needed simply to hold serve, and he did.

Joy was unbounded, and all the more so when, 10 minutes later, Ward levelled his match, also in a tie-break, after three and a half hours.

It was nip and tuck through seven games in the fifth before Ward went 0-40 down on serve and a tired forehand into the net gave the American the crucial advantage, 5-3, and he served it out with his 26th ace of the match.

It was close to being a fairytale British ending in the brilliant evening sunshine and Ward, rightly, took a standing ovation. Just 15 points out of 333 separated them and, as Fish quickly conceded afterwards, the difference in rankings meant nothing:

“He played much better than the number alongside his name, that’s for sure. He’s one of the toughest opponents I’ve faced here at Wimbledon in a long time.”

And even the downcast Ward had to admit: “It was enjoyable: How can you not enjoy an atmosphere like that?”

Indeed: He gave many British fans a day to remember.