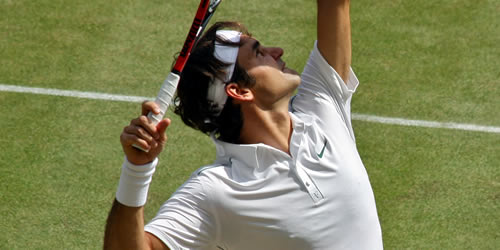 It was, as they say, like dejà vu all over again.

Dejà vu from 2010 when Roger Federer went two sets and a break down in his opening match on Centre Court against No60 seed, Alejandro Falla, and came back to win.

Dejà vu from Federer’s last Grand Slam: Paris, around a month ago, facing Juan Martin del Potro in the quarters and losing the first two sets in near identical scores. He came back and won that, too.

Dejà vu from just 24 hours ago, as the Wimbledon media poured onto Centre Court in the fading evening light when No2 seed Rafael Nadal went two sets to one down against the No100-ranked Lukas Rosol. The two-time former Wimbledon champion made his shock exit in a blaze of bullets, 6-4 in the fifth.

Which scenario would prevail when Federer found himself in the same predicament as in that 2010 Wimbledon first round, as in that recent Grand Slam quarter-final, as in Nadal’s second-round dilemma?

Would he become the second straight former champion to fall under the closed roof, inside the echoing, day-glo green of an indoor Centre Court?

What made the unfolding drama more of a surprise was the form Federer had shown in his opening matches. He dismissed Albert Ramos, ranked 43, for the loss of just three games in under 80 minutes. His defeat of Fabio Fognini was complete in only 74 minutes. The No3 seed, with a win-loss record of 41-6 this year and four titles to his name, looked sharp, fit and eager. Surely the No29 seed would be no problem.

It so happened that fellow 30-year-old Julien Benneteau, a friend from their earliest tennis days as 12-year-olds, had some form against Federer. In their last meeting at the Paris Masters, he beat the Swiss in three sets after losing the first. And after 12 years as a pro, he reached a career-high ranking this spring, only slipping back a few spots after injuring ankle and elbow in a fall at Monte Carlo.

For the first eight games, things went according to plan: a couple of games went to deuce—both on the Frenchman’s serve—but otherwise it was straight forward, big-hitting, short and sharp rallies. Come the ninth game, though, and Benneteau earned the only break point of the set with what became his marquee shot in the match, an cross-court winner. Federer netted his next backhand and that was all Benneteau needed. He served out the set, 6-4.

Federer’s increasingly vocal fans had reason to cheer early in the second set when he earned three break points in the second game and converted the last with a wrong-footing forehand. Benneteau fell—a concern after his injury in Monte Carlo—but he showed few ill effects and promptly went up 40-15 on Federer’s serve. Two great serves saved them but a rash smash well long of the baseline offered a third and Benneteau levelled.

Now the Frenchman simply caught alight. Like many of his compatriots, Benneteau has many tools at his disposal. He can serve big, is happy to follow in to the net for a put-away or a drop shot but can pound the ball from both the forehand and backhand, too. He can even match Federer with his backhand slice and the crowd was treated to some gripping exchanges as each tried to out-manoeuvre and out-touch their opponent around the court.

In both the seventh and the ninth games, Federer faced a break point, outplayed first by a cross-court backhand and then by a lob winner. The Swiss had to play at his best to live with the variety and accuracy thrown at him but he did and, come the 11th game, Federer pressed his opponent through seven deuces and three break points, yet still he could not take the set.

They headed to a tie-break which Federer afterwards admitted was always going to be difficult: “Once I gave the break back and I had the 6-5 situation, I just kind of felt that the breaker was going to be a rough one for me.”

It was, too. Benneteau went 3-0 ahead, then 6-2 ahead, firing aces and forehand winners at will. He hammered away at the Federer backhand to make the final winner, and led by two sets.

The Federer body language is always inscrutable and once again, he looked the calmest man in the building: “Well, I was actually calm, to be quite honest.

“I guess when I sat down, I said, alright, here we go now. The match has only just started. He’s still such a long a way from the finish line that there is no reason right now to go crazy about it. Let’s see how the third starts and then we’ll take it from there.”

Benneteau picked up on the same moment and the mental strength of his opponent: “Mentally he’s a rock. He’s two sets down and he doesn’t show anything.

“After that, if your level is a little bit lower, right here, right now he takes the opportunity. At the beginning of the third set I was a little bit not as good as I was during the first two sets, and in five minutes it’s 4-0.”

Benneteau made fewer errors in the third set but also fewer winners—just four compared with 26 in the second. Federer broke in the opening game and again in the third. In the sixth, Benneteau could not even get a racket on the ball: two aces, another big serve, and a serve-and-volley winner took the lead to 5-1 and another love service game sealed the set, 6-2.

But if anyone in the increasingly raucous crowd thought that the Frenchman would buckle or fade, they were wrong.

Federer must have rued his early chances to break in the fifth game—he took a 40-0 lead with some trademark dancing off-forehands and a peach of an off backhand cross-court winner—but it was Benneteau’s continued high quality serving and his ability to put away big second-strike volleys that kept him in touch.

Neither man would face another break point in the set—between them, they made only 11 unforced errors in 13 games and 53 minutes—and the headed to another tiebreak.

And his zen-like calm saw Federer through again, despite waiting for what seemed an endless Mexican wave from the cheering and chanting fans.

The tension cranked up with neither man gaining more than a point’s advantage all the way to 6-6 despite some acrobatic reaches for volleys from Federer and some great chasing down of drop-shots from Benneteau. But Federer kept that vital point in front and Benneteau made the error at the crucial moment, a backhand long to give the tie-break to Federer, eight points to six.

It all ended rather faster than some expected—much as that match had two years ago against Falla. Then, too, Federer rode his momentum to a deft and deadly conclusion, and this time, with Benneteau’s legs starting to give way, he did the same. Two errors were all he made in the set’s seven games and 26 minutes to record his 849th of career win, 6-1.

There shared, as expected, a generous hug at the net and a standing ovation of many minutes. There had been little to choose between these 30-year-old friends: 14 aces to 15, identical serve speeds, 39 net approaches apiece, 53 winners to 59, 29 errors to 32. But the numbers counted for little.

This was entertainment of high quality, high drama and high sportsmanship, right up to the handshake: “Well, we’re very friendly. At the first tournament I ever went to in France I remember seeing Julien.

“Obviously we knew that moment was sort of a magical moment for both of us for the rest of our lives. You appreciate that. He hoped that I win the tournament now and wished me well: I congratulated him for an awesome performance and that he deserved it.”

And, a rare sight these days, they walked from the court together.