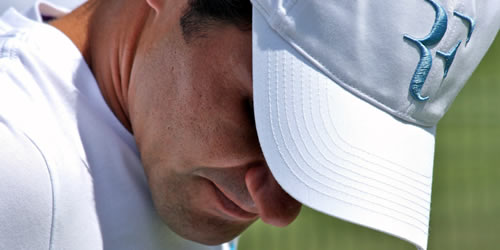 It was a day for royal welcomes, tutored handshakes and awkward bows when the Centre Court Royal Box at Wimbledon hosted the highest-profile name since Her Majesty the Queen took her place in the front row in 2010 for only her fourth ever visit to the Championships.

Not since 1970 had the Prince of Wales visited the tournament—and, for the record, he watched eventual champion, John Newcombe, beat Dennis Ralston—and whether by design or simple good fortune, he happened to catch the ‘prince’ of London’s green lawns doing what he does best.

Roger Federer, playing his first match on Centre Court this year, was up against Italy’s Fabio Fognini, No68 in the world but, judged by the impression he made on Federer’s tennis, he might have been 168.

For if the six-time champion, wearing whites trimmed with the very colours of the tournament, green and purple, had impressed in his opener on Court 1 against Spaniard Albert Ramos—a 79 minutes trouncing of the world No43 for the loss of three games—this victory was even more impressive.

Perhaps Prince Charles and the Duchess of Cornwall had had a quiet word with Federer, scheduled to play first at 1pm sharp, about lunch. They, or the representatives, had certainly explained the protocols to Federer and his opponent:

“We were briefed beforehand so you behave—but we were asked to bow which was no problem to do: We are thrilled the Royal family came to watch.”

Sure enough, he and Fognini turned to bow as they arrived and, little more than an hour and half later, they bowed on their way off, too—and that allowed for the formalities of coin toss, warm-ups, intros and ball-changes, though there were precious few of those required.

The match itself lasted a slim 74 minutes, a 6-1,6-3, 6-2 demonstration of why Federer has, during the course of this year’s Championships, become the most prolific active player on grass with 106 wins.

It was, despite the predictability of the outcome after a swingeing 23-minute first set, an entertaining match aided not a little by the all-court game and enthusiasm of Fognini, who in the second set in particular fired some crowd-pleasing winners—though only seven of them. But the Federer stats were as ruthless as they were thrilling for any fan of his fast fluid tennis.

Against Ramos, his first serve averaged around 70 per cent, he hit 33 winners and made just 10 unforced errors. With royalty in attendance against Fognini, he served 13 aces, upped his winners to 35 and cut his errors to eight. Having broken in the seventh game of the third set, he dropped just two more points on his way to a 6-1, 6-3 6-2 win.

The two men embraced warmly, shared a few jokes across the net, before completing their royal duties—a neat and tidy bow—which, in Federer’s case, took in his parents as well as royalty. They, too, were front-row guests, alongside tennis royalty in the shape of Frank Sedgman, champion in 1952, and Stefan Edberg, champion in 1988 and 1990.

Federer afterwards commented: “I am pleased with how I performed and particularly with my concentration levels. I was serving well. You’re not going to get many chances throughout a set, maybe, against me, when I’m serving well. I really tried to focus hard and make sure I played a clean match, which I was able to do again today.”

Then he and his mother went off to chat to the Royals, talk about Charles’s brush with tennis lessons until he broke his arm playing polo, and, presumably, take a not-too-late lunch.

Meanwhile, former world No1 Caroline Wozniacki and Tamira Paszek returned to complete a postponed first-round match, only to be interrupted by rain. Time for the magnificent structure of the Centre Court roof to come to the rescue, though it could not save Wozniacki. She made her earliest exit here at the hands of last week’s Eastbourne champion after having two match points.

Next came Kim Clijsters—arguably the Centre Court crowd’s most popular non-British female—who, at a speed and with stats almost as impressive as Federer’s, advanced to the third round in 65 minutes.

The fans stood and cheered and she waved, but there was no need of a curtsy: the Royal visitors had left—which was a pity, as the reigning champion of Wimbledon and world No1, Novak Djokovic, put on his own royal display to close the day.

He was up against the young American, Ryan Harrison, who played a big part in making this as entertaining a match as the first of the day.

Harrison, just 20, and at a career high of 48, has a big-hitting, varied and grass-friendly game, and was fresh from a semi-final finish at Eastbourne. And he had won over the Centre Court faithful after just a handful of games with some cracking serving and energetic chasing around the court.

But Djokovic took control in the fifth game to make the break and took the first of three 6-4 sets. The American had a good chance to break Djokovic in the early stages of the second set, earning three chances at 0-40, but Djokovic, despite being far from his very best, found his clean, crisp ground strokes at the right time to fend off the challenge.

There looked little between them on the stats sheet—eight aces apiece, 31 and 30 winners, 15 and 14 unforced errors—but the score showed the reality: Djokovic had three break chances, one per set, and took them all. So at just before 10 pm and after almost two hours of play, the Serb was through, having recorded his 40th grass-court match win.

That tally shows that Djokovic may not be Wimbledon royalty yet, but he is certainly well on his way.