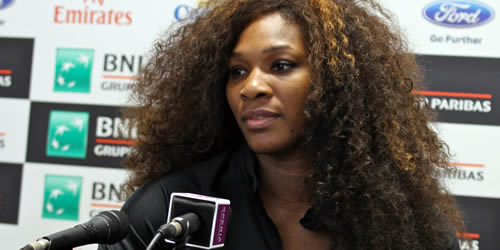 The women’s quarter-final line-up was a truly intriguing mix of styles, talent and storylines.

The top seed and world No1, Maria Sharapova, was gone and so was another multi-winning Grand Slam champion, Kim Clijsters. That had immediately guaranteed there would be a new No1 by the end of Wimbledon. One of the contenders, Agnieszka Radwanska, was in the top half of the draw, the other, Victoria Azarenka, was in the bottom.

The top half of the draw was guaranteed to produce a first-time Grand Slam finalist while the bottom half contained all three remaining Grand Slam champions, two of whom were Wimbledon titlists: defending champion Petra Kvitova and four-time champion Serena Williams. And as luck would have it, these two were drawn to play one another.

And by chance, the two German women in the draw—No8 seed Angelique Kerber and No15 seed, Sabine Lisicki—were also drawn to play one another, and for the third time this year. What’s more, they were as mirror images of one another: one left-handed, one right; both with blond ropes of hair plaited down their backs.

The one unseeded woman was also the youngest and the only one to arrive at Wimbledon with a grass title to her name this year. She was Tamira Paszek and she had beaten Kerber in the final of Eastbourne.

But, as luck would have it, she sat with those three Grand Slam champions at the bottom of the draw. And her challenge, in her quarter-final, was to play one of the most successful women of the year, Azarenka, winner of 26 straight matches at the start of this season.

The first to play were Williams and Kvitova, and Williams was clearly happy to be back on Centre Court after the rigours of Court 2. After two long three-setters in her last pair of matches, she came alive in the place she might regard as her own stage: six times a finalist in singles and with four doubles titles here as well.

She took the first set in a scant half an hour with a flurry of 17 winners and seven aces and just four errors. Meanwhile, Kvitova earned not a single break point despite making only six errors of her own.

But the second set was much more competitive, with both women trading huge ground strokes on both wings. The Kvitova cross-court play to the Williams forehand in particular made some valuable points: She stacked up 14 to 10 from Williams.

Serving first, the tall Czech woman led 5-4, so when she brought up her first break point chance of the match, it was also a set point. But, as is so often the case, Williams served huge to save it and then a powerful tit-for-tat at the net—a dangerous exchange between the big forehand weapons of these two—went to Williams and she held.

Then suddenly, the set turned. Kvitova looked in control on serve, making two straight backhand winners down the line, but she found the net with a third to give a break chance to her opponent and another error sealed her fate. Williams had the break and needed no further invitation. She closed out the set, 7-5, with three aces, two of them at over 116 mph.

The last player to beat Kvitova as Wimbledon was Williams in the 2010 semi-finals. Now the beaten defending champion sees the same woman head off to her eighth Wimbledon semi, her 21st Grand Slam semi.

Williams will play Azarenka in the semi-finals. Not that the prospect of the woman from Belarus will give the American sleepless nights. She has beaten her in seven of their eight meetings, including the final of Madrid this year.

Her view? “It’s going to be another match where I have absolutely nothing to lose. I can just go out there and enjoy myself and have fun.”

And asked about her new status as the favourite the title: “I don’t think about it. I just think I can do the best I can. You know, I still have hopefully two more matches to play and win. That’s my goal.”

Kvitova had no such hesitation when asked whether Williams would now win: “I think so.”

In another rain-disrupted day at SW19, two of the four matches were still to be decided as the gloom descended over the All England Club. Radwanska and Kirilenko, without the benefit of a roof on Court 1, were locked at one set all and 4-4 when they stopped for the umpteenth time, separated by just one point, 101 to 102.

The last match, that confrontation between the unseeded Paszek and the No2 Azarenka, made a last-minute move to Centre Court but not before Lisicki and Kerber had gripped an enthralled crowd in a topsy-turvy three-setter of more than two-and-a-half hours. Remarkably, there were 13 breaks of serve in a 6-3, 6-7, 7-5 match that finally went to Kerber, seven of the breaks coming in the final set.

Not so remarkably, the stats showed where the aggressive play of Lisicki had gone wrong. She hit 57 winners to Kerber’s 19 but made 50 unforced errors: Her opponent made only 13.

So Kerber’s star continues to rise. From a ranking of 32 at the end of 2011, she came into Wimbledon with her first two career titles this year and at a career-high No8. She will now rise to at least No7 next week. And from a best finish of third-round in a Grand Slam at this time last year, she has now made the semis of the US Open, the quarters at the French and the semis at Wimbledon.

Who knows where this story will end?