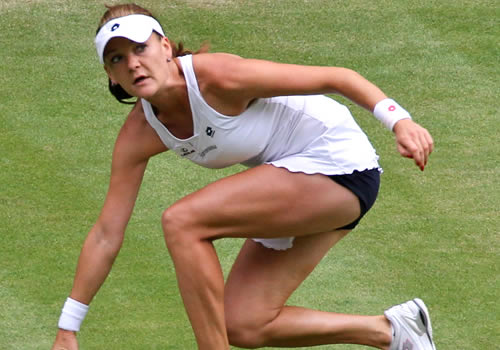 Agnieszka Radwanska is through to the last four at SW19 Photo: Marianne Bevis

There were, without doubt, countless shocks and upsets along the way to the women’s quarter-finals of the 2013 Championships.

First it was No2 seed Victoria Azarenka withdrawing, then No3 seed Maria Sharapova was beaten in Round 2. But the biggest shock came when the outstanding favourite for the title, Serena Williams, was sent packing in the fourth round.

Williams, then, would not defend her singles title, and she had already been forced to forsake the women’s doubles title when her sister Venus pulled out injured before the tournament even began.

But on an overcast and chilly second Tuesday, there was an array of top-flight women on show—perhaps shamefully overlooked before Wimbledon began but now taking their deserved place in he spotlight.

The first match of the day featured the No4 seed, Agnieszka Radwanska—the finalist from last year who pushed Williams to three sets in one of the women’s contests of the year. This was her ninth Major quarter-final, her fourth at Wimbledon.

She played one of the two Grand Slam champions left in the draw, Na Li, winner at Roland Garros in 2011 and finalist in this year’s and last year’s Australian Opens. She was playing in her eighth Major quarter-final.

And if that was not good enough, they were followed by a former Wimbledon champion, Petra Kvitova, seeded No8, winner here in 2011. She had seven Major quarters on her CV, including here last year.

Then there was the largely unsung French woman Marion Bartoli, who had proved her grass credentials here by reaching the final in 2007, was a six-time Major quarter-finalist, most recently at last year’s US Open.

Indeed seven of the eight women were seeded 23 or higher and the only unseeded woman, Kaia Kanepi, had twice reached the quarters at Wimbledon.

But it was those top two seeds, popular women both, already with titles this year and with two of the best win-loss records on the tour this season, who faced one another in what promised to be the highlight of the day.

On one side, Radwanska has the kind of crafty, all-court game to bamboozle her opponents: unconventional backhands, remarkable variety in slice and a nimble game that sees her open up the weaknesses of the strongest of opponents.

Against her, Li has a game for the purist: strong, clean and crisp ground strokes, played with supreme elegance and precision that, when on song, produce tactical chess.
They were also familiar with each other’s considerable strengths, having played 10 times. Radwanska has won two of their three clashes on grass, but Li had won two of their three encounters at Grand Slams and four of the last five.

But at first, it seemed to be the wind that controlled the tennis. Both were broken to love in their opening games but even in these challenging conditions, each threw in winning lobs, introduced low sliced shots and made the occasional ghost to the net.

A wonderful Li cross-court backhand fought off deuce on her next serve and they held level to 3-3.

In the eighth game, Li had to find all her concentration to fend off two break points and, despite great placement by Radwanska, Li attacked the net to take control and hold. With this momentum, she broke to lead 5-4 with a stunning off-forehand winner and seemed on the way to the set until the magic of Radwanska kicked in.

The Polish woman countered big tennis from Li, passed her twice at the net, defended what looked like a lost cause in the face of four set points and, on her first break point, slotted a forehand winner down the line.

They headed into a tie-break, with the attack of Li facing the defence-turned-attack of Radwanska. With the clock at one hour, they were locked at 6-6, 5-5, but two long gruelling baseline exchanges gave the vital two points to Radwanska. She had resisted, countered, thrown drops and lobs and slice into the mix, and taken the first set in the face of a full 19 points out of 31 net attacks from Li.

At precisely the same moment, the score from Court 1 flashed up: the winner of this contest would face Sabine Lisicki, who had just beaten Kanepi, 6-3, 6-3, with an impressive 23 winners.

After a 10-minute pause as the court was covered and just as quickly uncovered, the players were quickly back, no warm-up required, but Li had lost her rhythm in the interim. She held her opening game but was broken in the second. Again, the wind was blustery, though contrary to their disparate styles, it seemed to affect Radwanska little—thus far, at 4-2 up, she had made only 11 errors.

Li continued to look for openings at the net, and held for 3-4 with her ninth winner from the front of the court. It was such boldness that brought her the reward of a break back—a smash winner and a drive volley winner—and she held off break point in the ninth with the same brave play, taking back the lead with a backhand winner down the line. She rode the wave with three consecutive return-of-serve winners, to take the set, 6-4 with a tally of 23 winners.

After a lengthy medical time out for Radwanska that added heavy strapping to her right thigh, the battle entered its final stage and its third hour. Radwanska belied any physical problems by breaking straight away, and again, it was Li who seemed to come out cold. From 40-15 on her next service game, she double faulted twice as umbrellas went up. At the worst of all times, needing one point to hold serve, the ground staff poured onto the court and the match was stopped for half an hour.

Li came back to hold that one point and her serve, but she could not work any momentum. Her best tennis of the set came as she faced match points, bravely taking to the net again, and she held, 2-5. She then went full out at the Radwanska serve and fought through seven deuces, attacking, finding the lines and pressing for the break. But Radwanska was just as impressive in closing out a very fine match, 6-2, two and three-quarter hours of it.

There had been 103 points played at the net, both women winning two-thirds of them, and both served at 77 per cent.

Radwanska quickly allayed any concerns about her legs: “Just too much tennis in the last few days, but I think that is a good problem to have!”

And she will need all her resources, along with her extraordinary defence and creative ground stokes, if she is to get past Lisicki. They are, it transpires, old friends from junior days—Lisicki is fluent in Polish—but have played each other only once on the senior tour: They split the honours.

It should be semi-final worth waiting for.