Wimbledon 2013: Andy Murray battles back from two sets down to beat Fernando Verdasco and reach the semi-finals 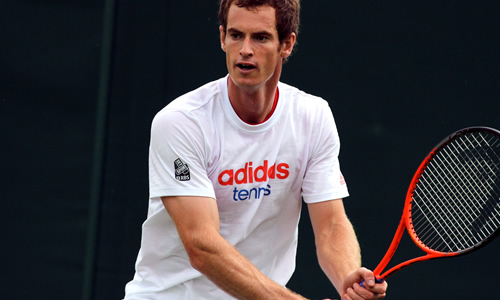 For Andy Murray, his biggest Wimbledon worries ahead of a designated meeting with friend and foe Novak Djokovic in the final seemed to be out of the way.

His threatening draw, posing Janko Tipsarevic, then Jo-Wilfried Tsonga or Marin Cilic, followed by either Rafael Nadal or Roger Federer, had become a thing of history. All went out in the first two rounds.

The highest seed he faced was No20 Mikhail Youzhny in the fourth round, and just as in his previous matches, he did not drop a set. It got better.

He faced the unseeded Fernando Verdasco, ranked at 54 and never before a quarter-finalist at Wimbledon. To make matters better still, Murray had won eight of their nine previous matches. History beckoned the Briton.

Murray was bidding to reach his fifth consecutive Wimbledon semi and his 13th Grand Slam semi overall, which would equal Fred Perry’s record for a British man. And enjoying a 14-0 winning streak on grass courtesy of Olympic gold last August and the title at Queen’s last month, he was in great shape and high confidence.

He was far from complacent, however. The left-handed Verdasco had been a top-10 player, reaching No7 and the World Tour Finals in 2009, the year he also reached the semis of the Australian Open.

“Verdasco is a very, very good tennis player. He’s playing very well this week. He’s extremely dangerous when he’s on his game.” And Murray had made sure to practise against a left-hander, his first of the year, before the match.

Big game or not, there was no doubting Verdasco had been on a downward slide. He reached the third round at Wimbledon last year as the No17 seed, and was now at his lowest ranking since July 2005. He had not won a title since 2010. In the process, his confidence had drained away:

“The last two years haven’t been good for me, and my ranking shows that…and I lost a lot of confidence every time I lost in the first round. I started questioning myself, I started asking why I couldn’t find the form that I had before, but I started training well the week before Madrid [in May], and really since Madrid the feeling has been different for me. I have felt much better.”

That certainly showed at Wimbledon, taking out not just No31 seed Julien Benneteau but the dangerous Ernests Gulbis. And he started this match with that same confidence, deploying his big weapons aggressively.

It was he, not Murray, who dominated the net, working his way forward a dozen times in the first set on the back of heavy and deeply-placed forehands. In fact, he fought off a first break point with a serve-and-volley winner, and turned the tables in the next game to break for the set, 6-4. Murray had only made three errors but needed to up his offensive tactics.

He started with better serving, up to 80 percent from 55, and it earned him a quick break in the third game. Verdasco went 0-30 down on his next serve, too, but remained fearless in going for his shots. Tactically, he played smart, pounding wide and heavy with his forehand to the Murray backhand, breaking it down, then throwing in a heavily sliced shot to draw Murray forward.

This drew two volley errors in the sixth game, and a wild Murray forehand brought the score back to 3-3. A strong hold from Verdasco later, and Murray was on the back foot again as his error-count crept up. Then fate also lent a hand to Verdasco: on break point, his return of serve clipped the net and bounced away for a winner. The Spaniard was left to serve for the set.

It looked for all the world as though Murray would grab the advantage back. A dramatic 28-shot rally ended with a magical cross-court passing shot from the Briton, and the crowd went wild. He won the next forehand exchange, too, to go 40-0, but Verdasco continued to play big and levelled to deuce with the same killer combination of heavy topspin alternated with dying slice. He drew the errors and took the set, 6-3. Murray’s error count had shot up to 12, but the tactics were right.

He continued to attack in the third set, and now Verdasco began to waver and the momentum to shift. The Spaniard’s first serve dropped to 50 percent and Murray began to control rallies from inside the baseline. He broke in the second and sixth games and served out the set, 6-1.

The question was whether Verdasco could respond to the Murray surge. He held his opening service game and came close to breaking Murray in the second in perhaps the game of the match so far. Twice Murray fought off break points with huge serving, and sealed the game in an outstanding rally of acrobatics, both reaching for wide angled volleys and both ending up prostrate on the court—but it was Murray who held and then resisted two break points in the sixth.

With some wonderful defence in the face of massive hitting, Murray broke in the seventh and closed out the set, 6-4, with a confident love hold.

It all came down to the fifth, which encapsulated the match. Verdasco hit back hard, and Murray responded strongly—but in the end, it was his defensive skill that kept the edge. Verdasco hit more winners, 12 of them in the final set, but also more errors in going for his shots, 11 to Murray’s four. The Briton broke at 5-5, finding the lines time and again, and served out a classic match, 7-5.

It was a wonderful conclusion, smiles and generous words at the net, and of course a standing ovation for the man who had survived a real mental and physical test. As Murray said:
“Verdasco’s a very, very, very good player—playing like he did a few years ago, serving even better.”

Murray’s semi-final opponent will be just as big a challenge against an even bigger server. Jerzy Janowicz was one half of a record-making quarter with fellow Pole, Lukasz Kubot.

The 6ft 7in 22-year-old Janowicz made his Grand Slam and grass-court debut as a qualifier here last year to reach the third round. He subsequently did the same at the Australian and French Opens, reached his first Masters final in Paris last autumn, and climbed 195 places to end the year at No26.

Kubot had six chances to break in the match but in the face of quite remarkable serving—30 aces, a top speed of 140mph and an average speed of 126mph—it was a thankless task, and a severe warning to Murray.

The Briton has experienced this devastating Pole before, too, being one of Janowicz’s victims in that Paris Masters run. But a very emotional Janowicz admitted it would be a difficult match:
“I think it will be a really cool match, a really nice atmosphere. For sure the crowd will not really help me but we’ll see how it’s going to be. He’s a great player…but I was able to win one match against him last year, so I hope I’m going to be able to do it one more time.”

Come Friday, he will almost certainly find the vast majority of Wimbledon hopes he cannot.