Wimbledon 2013: Marianne Bevis rounds up some more bits and pieces from the men's draw ahead of the SW19 tournament 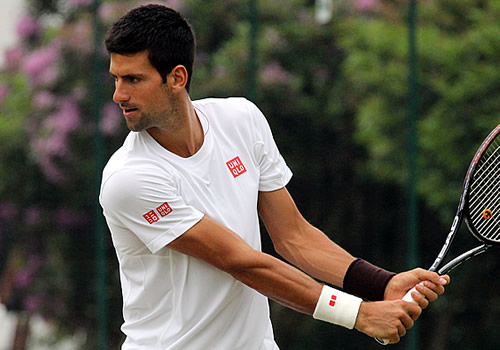 And so the quiet days, pregnant with anticipation, come to a close as the All England Club throws open its gates for the first day of competition at the 127th staging of the Wimbledon Championships.

Everywhere there are flowers—hanging from baskets, overflowing from troughs, and in hues to match the classic greens and dark brown, and with just enough rich purple.

The heavy wooden benches have received their final coat of varnish, but the honeyed scent still hangs in the air.

Clusters of security guards have received their last instructions, the Wimbledon hawk has made its final sweep, and its yellow labrador has sniffed its last corner.

And for the last time, familiar tennis faces bearing heavy racket bags have ambled undisturbed between locker room and practice courts. The next time, they will need uniformed protection against the pressing crowds.

This must be how Harrods looks moments before its doors open for the New Year sales: a still-life perfection.

That very first Championship, back in 1877, saw two Britons contest the first final, with Spencer Gore beating William Marshall, 6-1, 6-2, 6-4. This year, it may be another Briton, Andy Murray, who sees his name etched into the golden cup on final Sunday.

Since he reached the 2012 final, going on to win Olympic gold on the same rectangle of grass and thence to his first Grand Slam in New York, the belief is greater than ever—not just in the heart of a nation but the heart of Murray himself:

“Obviously it helps [having won Olympic gold]. All the Slams or the big events or big matches that I play in now, I would hope that I’d have a little bit more confidence in myself and a bit more belief.

“But just because it’s Wimbledon doesn’t mean that I’m going to do great there because I played well on the grass last year: There’s no guarantee at all in sport.

So you’ve got to go in there, work hard, and be prepared to go through some tough moments and find a way to deal with them. Hopefully I can do that at Wimbledon.”

But what of his rivals, the big names already with Grand Slam titles, the men fresh from wins in this brief month of grass-court tennis, the men who have been knocking at the door in the rankings, and those making their first challenges of their young careers?

Janko Tipsarevic, who turned 29 this week, and a staple in the top 10 since 2011, has not enjoyed the best of seasons, but he worked hard on the grass of Stoke Park ahead of Wimbledon:

“This is only my second day on the grass. I was a little bit sick after the French Open so I took seven days off. In terms of ball hitting and serving and volleying, I’m feeling quite confident. I would really love to progress into the second week of Wimbledon. My ranking has dropped a little bit because I didn’t play well as well on clay as I did last year, so I’m hoping to catch up.”

Richard Gasquet is nearing his career high of five years ago, ranked No9 and with two titles to his name this year:

John Isner, a famous name at Wimbledon for his record-breaking match against Nicolas Mahut, has also slipped from the No9 he reached last year to a current No21:

“These tiebreakers and long matches seem to follow me, especially here in England! I feel like I’m shaping up pretty well for Wimbledon. My goal is just to go out there, stay level headed and keep competing. It brings back good memories coming back to London. I feel like I’m getting better and better at playing on this surface.”

The unassuming 31-year-old Mahut has the perfect grass-court game—wonderful volleying, great backhand slice and an attacking mentality, but until this week had never won a title. He went into ‘s-Hertognebosch ranked 240 and came out ranked 124, having played and won three qualifying and five main-draw matches:

“It’s amazing. I cannot believe I won today. I didn’t know if I was going to play again when I had some bad times with my knee. All my team helped me a lot. We worked hard and here I am with the trophy. It’s a good story.”

The man Mahut beat in that final, Stanislas Wawrinka, has also enjoyed unprecedented success this season, breaking back into the top 10 and reaching the Madrid Masters final. He will feature in one of the first-round matches of the tournament:

Feliciano Lopez became the eighth over-30 winner this season in Eastbourne. to He claimed his first grass title by beating Gilles Simon, who he is also drawn to meet in the first round of Wimbledon. Lopez has reached the quarters at Wimbledon three times:

“I think grass is my best surface, and to have at least one title on grass is a very nice feeling. This match was really special, but playing the same guy in two days, it’s also important to have some feedback, even though we know each other very well.”

Novak Djokovic, world No1 and former Wimbledon champion, has looked almost serene in his demeanour on grass—at Stoke Park and at SW19:

“There’s no bigger motivation than playing in the most prestigious tournament in the world in our sport, the one that I always dreamed of winning. I won it two years ago and it’s definitely been the highlight of my career. I love playing at Wimbledon.”

Alexandr Dolgopolov, the smiling 24-year-old with the unconventional game, hit No13 at the start of 2012 but has struggled to find consistency this year, now down to No24:

“I feel I’m playing pretty well now, so I’m confident going into Wimbledon and I think will play some good matches there. I don’t have a game that is simple so sometimes I’m really up and down. I think I could do quarters, I think I can lose first round. It’s how it goes on grass.”

Rafael Nadal, in his pre-tournament news conference, was pragmatic at being ranked No5 and drawn to play Federer and Murray in the quarters and semis:

“I am No5 and David is No4. He win his privilege to be No4 before me, and that’s it. The rankings say that these kind of things can happen. I know you are talking about Andy and Roger probably, but I don’t see them before quarter-finals and semi-finals. So I have a long way to work before that.

“I didn’t play a lot on grass last couple of years, so I really take care about myself and about the first round. I don’t think about the other things, no? My view is if I arrive to quarter-finals is because I will be ready. Then you can win, you can lose. But for me, going to be very tough to be there. I’m going to try.

Roger Federer’s view on it was typically up-beat—though of course he would be foolish admit any concern:

“I’m ready for the challenge. I like tough draws. I don’t shy away from them. I have a very difficult draw with Rafa being in my quarter [but] my focus is on the first round. If you want to win the tournament here, you anyway have to beat the best. That’s what I’m here for.”

Djokovic, the other one of the ‘big four’ and in solitary splendour in the top half of the draw, was clearly amused:

“Well, [smiling], I think it’s going to be a great Monday for tennis.”

Indeed, as the gates opened at 10.30 on the first Monday, it was Federer warming up on Court 11 against Marin Cilic—laid back, bandana-less, watched by compatriot and former Wimbledon champion Goran Ivansevic.

Cream cashmere scarf in place to sign some autographs, Federer overlapped with Nadal as he began an altogether more urgent, powerful warm-up with friend Juan Monaco in the firing line.

Later it would be Murray: All three men were schedule across Centre and No1 Court in the day’s schedule.

Murray is appearing the day after a revealing BBC documentary that showed not just his training regime—iced baths and all—but much of the emotional character under the wall he has erected around himself in public.

As the home favourite for the title this year, it seems appropriate to give the last word to him. Certainly he looked and sounded very relaxed in his news conference, and contrary to the extra pressure he may have felt in previous years, he now revels in the idea of home support:

“It’s very important. In all sports really when you play with the crowd behind you or the home crowd, yeah, it makes a huge difference. Not always just for you, but the guy you’re playing against, as well. They can feel a bit intimidated, or if you get a lead on them, it can be hard to come back from that.

“I like being nervous before a match. Maybe some players don’t like that. I get very nervous before matches here, but I often feel like that helps me play my best tennis. It maybe helps me concentrate better. Some people may feel like they make bad decisions on the court or they don’t move as well or whatever it is. You know, I just feel like it makes me focus my mind a bit better.”

Djokovic was asked how he thought Murray coped with the pressure of home expectation:

“I think he handles pressure really well. But everybody feels pressure: It is part of what we do, part of professional sport. It’s a challenge, but it’s also a privilege because having pressure means that you’re doing something that is important, that is very valuable. You have to learn how to deal with it, you know, and accept it.”

It sounds as though Murray has done just that… so, all you British fans out there, show your love.