Wimbledon 2013: Fernando Verdasco played calmly to his strengths as he overcame Ernests Gulbis on Court 3 to reach round four 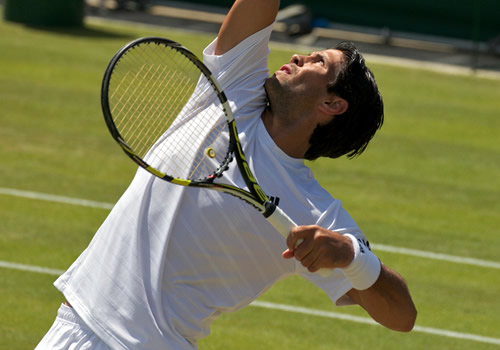 When it comes to the dramatic art that is Grand Slam tennis, Wimbledon still manages to capture the formality, the tradition, the awe of a bygone era.

The oldest Major, the only one played on lawn, continues rituals long abandoned by its siblings. White is the colour for its combatants, deep green and royal purple the colours for their stage.

An attentive hush during play, appreciative applause for the underdog, enthusiastic cheering for great play—even against their favourite—is the order of the day. And while Pimms and strawberries are everywhere, it’s quite OK to bring some wine and a picnic.

The polite announcements begin from early morning, guiding the campers who have queued for 24 hours for a place on Centre Court: a flat rate price, just friendliness required. The same fatherly voice punctuates the day, now about opening times, now about sun-cream, even to apologise for the weather.

But there is no music, no pre-match interviews, neither fanfare nor frenzied run-downs of the players’ credentials. The fans here simply rise to welcome their heroes and then cheer them to baseline to start the show. The razzmatazz is the tennis: It’s as simple as that.

Yet this year, amid such finely-managed choreography, there has been enough drama to ruffle Wimbledon’s swan-like progress.

Rafael Nadal lost in Round 1, defending champion Roger Federer lost in Round 2 and was followed by former champion Maria Sharapova and Australian Open champion Victoria Azarenka.

Records of the most unfortunate kind began to pile up: 13 retirements equalled the worst in Wimbledon’s Open era; only half the top 10 seeds in both singles draws was the worst in any Slam in the Open era.

But there were, of course, Andy and Laura, and Wimbledon’s conservative crowds showed the extrovert personality cultivated by the Olympic jamboree almost a year ago. Back then, Andy and Laura became medal winners: Now they carried the hopes of a nation and filled headlines day after day.

And by Saturday, a packed schedule boasted the top seeds on the two biggest stages: Novak Djokovic on Centre Court, Serena Williams on No1. There were back-to-back Aussie favourites ahead of Djokovic and two of the four highest ranked men still in the draw ahead of Williams.

The grounds were bursting at the seams in the hottest sun of the tournament, the busiest day of the Championships, and there was even Tim Henman amid dozens of up-and-coming youngsters packing out the stands before main-draw action got under way.

What was needed, on a day like this, after a week like this, was a place to sit back, soak up the snap of ball on racket strings and the patter of feet on this most forgiving of surfaces. A place with personality, with intensity, and without the frenzy of superstar or nation’s sweetheart.

That place was Court 3, a small gem of a show court—near Centre Court, near the clutch of outside courts, near just about everything, but not too near.

It is perfectly proportioned, with seats ranged neatly and steeply around a tight oval like a miniature version of the beautiful centre court at the Foro Italico, the venue for Rome’s pre-Roland Garros Masters and Premier tournaments.

Court 3, more than the rest, combines the advantage of a show court—Hawkeye, BBC, atmosphere and plenty of fans—with the intimacy of outside courts. And the opening match on this frenetic Saturday was the perfect contest: one where fans could absorb every word and gesture from the two men at its heart.

On one side, Ernests Gulbis, a player of flamboyant skill, frustrating temperament and in resurgent form: on the other, Fernando Verdasco, an intense power player, often brilliant but often, of late, thwarted by wavering confidence.

Where 24-year-old Gulbis had shot up the rankings from No139 at the start of the year to No39—the 29-year-old former world No7 Verdasco arrived at Wimbledon unseeded at No54, his lowest ranking in eight years.

Gulbis was in the third round of Grand Slam for only the third time in 24 Majors—he peaked at the quarter-finals of the French Open in 2008. Verdasco, playing in his 11th consecutive Wimbledon, had reached the fourth round here three times before and the semis of the Australian Open in 2009, almost beating Nadal in a five-set classic.

In truth, most pundits would favoured Gulbis: He had 21 wins to 9 losses this year, including the title in Delray Beach, took sets off Nadal in both Indian Wells and Rome, and beat Verdasco in straight sets in Barcelona. The Spaniard had won only nine matches this year, making first-round exits six times.

But in Madrid, two month back, Verdasco began working with a new coach and found some better tennis, including two good matches against strong grass players here. He also sported a new look—no more the long unruly hair restrained with bands or caps, but rather a short, sharp, slick style.

Most noticeable, however, in this close-up sun-bowl of a court, was the calmness about the man. He has the build and colour of oak, a thick chest, and huge shoulders that power his left-handed game, yet often his body-language has been a weakness, disappointment written in those shoulders as much as his face.

In this encounter, though, it was the Latvian Gulbis—whose face is an open book—that gave away too much. Compared with the polite, quietly spoken off-court Verdasco, Gulbis is one of the sport’s most outspoken, often veering towards controversy.

Just weeks ago, the richly talented man from a rich family embraced his increasingly ‘bad boy’ image by criticising the top players for their boring off-court images: “I have no interest in appearing nice. On the court, it is a war. Off court, no problem. I have a good relationship with most of the players. But I want to say what I think. And if my prognosis is that I am going to win the match, it doesn’t bother me to say so.”

And seeing this personality at work on court is almost as fascinating as his tennis—not to mention how his opponent responds.

Gulbis’s irritation was palpable: was it the grass, the closeness of the packed crowd, or simply frustration at his own inconsistency? He cast his eyes constantly around the court and talked incessantly at his box. He complained of movement behind Verdasco, of line calls, of poor bounces. Meanwhile, Verdasco played calmly to his strengths, cranked up his serve to 130mph, broke twice, and took the first set, 6-2, with a backhand volley, despite recovering from a mid-rally slip.

The second set saw Verdasco break in the third game, heard Gulbis below ‘C’mon’ to himself—during his opponent’s serve—and pound his shoes with his racket as though punishing them for his woes.

Even at 40-0 up on serve, Gulbis could not contain sarcasm at a winning Verdasco backhand, and received a warning for ‘audible obscenity’. He held off a break point to hold, but played a poor return game: Verdasco was 6-4 up.

Was it gamesmanship or an urgent need for a comfort break that took Gulbis off court for five minutes? And could Verdasco remain focused as Gulbis then changed his racket, repeatedly bounced the ball, checked his toss and finally opened the third set?

And who would respond the better to the Latvian’s only break point of the match in the second game? Gulbis earned it with a touch-perfect lob, a reminder of his over-flowing talent, but he pushed his luck too far with the umpire, held up the Spaniard’s serve and received a time-violation warning. Still Gulbis would not let it rest—a bit more sarcasm to the umpire, a little longer delay to Verdasco.

Of late, this would have blown the Spaniard’s concentration, and the knowledgeable crowd—torn between the entertainment of Gulbis’s backchat and the impact it was having on his opponent—held its breath.

Verdasco aced, held serve, survived deuce on his next serve, and broke in the sixth with a brave return-of-serve winner. As if to rub salt into what may—or may not—be the wounded pride of the Latvian, he then served out to love, 6-4. He had made just one unforced error in the set: a double fault.

Such was the mini drama that unfolded in this gladiatorial arena: a contest between minds as much as bodies, self-control as much as flair.

Perhaps it did not make the headlines of Federer-feller Sergiy Stakhovsky going down to Jurgen Melzer, nor Aussie hope Bernard Tomic causing an upset against Richard Gasquet, but the oasis of calm that is Court 3 became its own simmering cauldron as two other men fought for their own place in Round 4.

And for those who don’t have tickets for the ‘big names’ on Centre and No1 courts on Monday, Verdasco will again be fighting his corner on Court 3, but this time his reward is likely to be a quarter-final against Murray. And there is little doubt where that one will be played out.