Wimbledon 2013: Marianne Bevis takes a look back at Andy Murray and Jerzy Janowicz's first meeting back in 2009 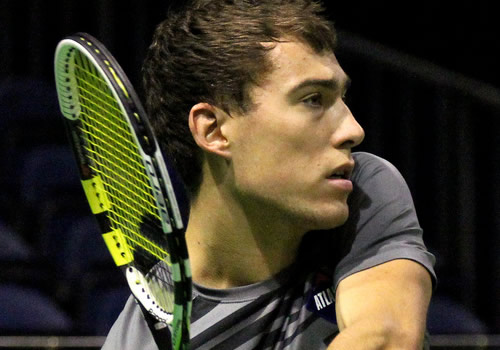 For the Andy Murray fans who thronged the All England Club on the day he began his campaign for the Wimbledon title, the name of Jerzy Janowicz may not have been the first to jump off the page.

Even among those who did recognise the name, and knew something of the rise of this 6ft 8in Polish talent, few on opening Monday would have predicted Janowicz as Murray’s semi-final opponent come semi-final day. For a start, the 22-year-old Pole sat in a quarter dominated by former Wimbledon champions Roger Federer and Rafael Nadal, and he was scheduled to meet first one and then the other before the semis.

But fate intervened, and along with Federer and Nadal, all the other seeds from Janowicz’s quarter, apart from his third-round victim Nicolas Almagro, went out. The No24 seed Janowicz did indeed reach not just his first Grand Slam quarter-final but his first semi-final—and a meeting with Murray.

But this will not be the first time the two have met. It will not even be the second time. This will be their third match—and they stand at one win apiece.

The most recent of them was last year, in what proved to be a breakthrough season not just for Murray—winning Olympic gold and his first Grand Slam—but also for Janowicz. The Pole made his Grand Slam debut here as a qualifier and reached the third round—he subsequently reached the third-rounds at the Australian and French Opens, too. He reached the final of the Paris Masters, also coming through qualifying, to take his ranking from 221 at the start of 2012 to 26 by its end. Next week, he will be at least No17.

And it was in Paris that Janowicz beat not only Murray, 5-7, 7-6, 6-2, but also Marin Cilic, Philipp Kohlschreiber, Janko Tipsarevic and Gilles Simon. Not surprising, then, that Murray has been keeping a close eye on the Pole.

“I followed him a bit this year…He’s a big guy with a lot of power. He also has pretty good touch, he likes to hit dropshots. He doesn’t just whack every single shot as hard as he can.”

But what about their first meeting? Well in 2009, Murray became the youngest to reach the Wimbledon semis—and Janowicz is the youngest to do so since—and he also met the Pole in a Davis Cup tie. And although Murray won comfortably, this observer was immediately impressed by the unknown teenager.

So for those yet to experience the Janowicz power, touch, and big personality, here is that first report [first published on Bleacher Report].

Andy Murray came to the Liverpool Echo Arena, saw his opponents, and conquered them. Sadly for the Great Britain team, that was not enough.

There was no doubting Murray’s commitment to his matches in the home team’s Davis Cup play-off, despite a sore wrist and a sore swipe at the media.

Having won his first rubber in straight sets, he was even more fired-up for his second match against the Polish No1. It was, and should have been, an easy match. Murray was, after all, playing the world No261. He duly won in straight sets.

But what the Liverpool crowd had the pleasure of seeing was a spirited and exciting new talent able to draw out the very best of Murray’s game. As a result, the teenager from Poland, Jerzy Janowicz, threw into even sharper relief just what GB tennis is lacking.

Janowicz, at just 18 years of age, was certainly not overawed by playing the world No3 on his home ground. What’s more, he had already taken a straight sets victory in his first rubber with an impressive power game that contained hints at all sorts of talent.

It was his physical presence that impressed first. Janowicz was variously described in the UK press as somewhere between 6ft 6in and 6ft 8in. He is, in truth, mid-way between the two, making him a fraction taller than the latest star in the tennis firmament, Juan Martin Del Potro.

Yet while he is still two years junior to the Argentine, Janowicz’s physique already looks more evenly proportioned. He certainly had his deceptively large frame under impressive control around the court, and showed a willingness to power from behind the baseline and to advance to the net position.

He made a lot of volley errors against Murray with this tactic, but that seemed due more to over-enthusiasm than to poor movement. What he lacked in consistency he made up for in aggression and ambition.

In fact, rather than Del Potro, the player who first came to mind, while watching this tall young man around the court, was Marat Safin.

Facially, he has the same eastern European bone structure and gloom-laden expression. That, of course, is a comparison that might damn with feint praise. Where Safin often allowed his temperament to dominate his talent, the Pole will need to channel his attributes more positively.

Back, then, to the Del Potro comparison. Janowicz’s style of play recalls much of the world No5’s powerful driving through the ball to generate huge pace and penetration. Unsurprisingly, he has a big serve too. Where he scores over Del Potro at the same age—two years ago—is in his mobility and forward speed.

But enough of fanciful comparisons: what about some facts and figures? Well there’s precious little information to go on. In the last Davis Cup round in March, Janowicz beat Belgium’s Kristof Vliegen (world No80), and he gave Andreas Seppi a run for his money in Marseille in February, losing 6-7, 6-3, 6-7. He has a number of other top 100 to 150 players under his belt, including two in the qualifying rounds at the US Open. Although he didn’t make the main draw there, he is heading in the right direction: just a year ago, he was ranked 600 in world.

These are still early days for this young talent, though Janowicz is already carrying the hopes of Poland on his young shoulders as they embark on their fight to keep their spot in Europe/Africa Group One*.

Based in Poland, he must cast envious eyes at the kind of financial and developmental support that his British equivalents enjoy. It’s probably fair to say that the British public, along with Murray, also casts envious eyes towards the vast pool of talent in Europe.

* Janowicz, with fellow Wimbledon quarter-finalist, Lukasz Kubot, have since taken Poland to its first World Group play-off this September.