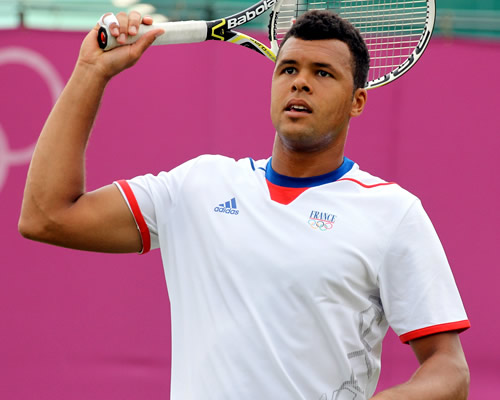 Roland Garros, as host nation, might have expected to boast a strong French contingent on its burnt orange clay, but when it came to Wimbledon, the picture was not so very different. It simply bulged with Gallic talent.

For France, when it comes to strength in depth, is one of the few countries to match Spain on the men’s tour: 12 in the top 100 and no fewer than six seeds in the draw.

Wimbledon, in fact, had 15 Frenchmen in the draw and a record-equalling 12 of them reached the second round. Only once, in 2007, had they matched it. The next record on the line was how many could make it to the third round. There the record was seven—reached in 1928, 1929 and 2010—and even before play began, France was guaranteed three.

The withdrawal of No18 seed John Isner and and No10 seed Marin Cilic, both with injury, gave Adrian Mannarino and Kenny de Schepper a walkover to the third round, while No25 seed Benoit Paire played compatriot Stephane Robert and beat him in three sets.

The lowest ranked of the French seeds, No31, was veteran Julien Benneteau, who had certainly proven himself no slouch on fast courts—indoors at the Paris Masters and in Rotterdam this year—and most significantly at Wimbledon last year, when he went two sets up against Roger Federer before losing the match in five.

He already survived a tough four-setter in the first round but then came up against the glamorous former top-10 Spaniard, Fernando Verdasco, currently ranked so low that he was unseeded at Wimbledon. It proved to be another very tightly-contested match with Verdasco taking the win, 7-6, 7-6, 6-4.

Also falling to a Spaniard, the No15 seed Nicolas Almagro, was Guillaume Rufin, and then eyes turned to another France-Spain face-off.

The unseeded veteran, Nicolas Mahut, claimed a place in Wimbledon history courtesy of his record-breaking match against Isner in 2010. He ended on the wrong side of a marathon 70-68 final set.

But Mahut, despite never reaching the ranking heights of many of his compatriots, has the perfect game for grass, a glorious serve and volley style complete with a classic single-handed sliced backhand and aggressive tactics. And he came to Wimbledon, after 13 years on the pro tour, having won his first ever title on the grass of at ‘s-Hertogenbosch.

So he arrived in London with barely a day in hand, and sailed through his first match for the loss of only nine games. Then in one of the most attractive matches—for those of an old-fashioned persuasion—Mahut took on another over-30 single-handed backhand in Tommy Robredo.

The Spaniard, a former No5 seven years ago, was lately returned to the tour after extended periods of injury, breaking into the seedings just in time for Wimbledon at No32 via the Casablanca title and a quarter-final finish at the French Open.

But the match of the day, and stand-out from the moment the draw was made, was between the top French seed, the charismatic and popular Jo-Wilfried Tsonga, and the hugely talented firebrand of a player, Ernests Gulbis.

Tsonga has always performed well on grass, beating Federer in 2011 to reach the Wimbledon semi-finals, and reaching the same stage again last year. He came close to beating Federer again in another five-setter in the Australian Open quarter-finals this January, and then beat him comprehensively to reach the semis of the French Open, consolidating his recent form with new coach, Roger Rasheed.

Gulbis, in contrast, has always been far from consistent—often brilliant, often a disaster waiting to happen. Here last year, for example, he beat former Wimbledon finalist Tomas Berdych in the first round but has never got beyond the second round.

Yet he seemed to turn a corner this season with renewed dedication to his sport and his huge ability. Gulbis started the year ranked No139 but played here at No39 thanks in part to winning his third career title at Delray Beach in March.

But the grass had never been his metier, winning back-to-back matches only once, at Queen’s in 2008. And he slipped and tripped all over huge expanses of Centre Court for much of the first hour. He fell, he moaned, he bashed his shoes and lost the first set after a double fault conceded a second break of serve to Tsonga, 6-3.

It looked as though the second would unfold in much the same way, Tsonga earning the first break point, but Gulbis began to play some superlative tennis, running down drop shots, firing huge serves and mixing it up a la Tsonga himself. The crowd, firmly behind Tsonga at the start, were captivated, and a stunning cross-court winner broke the Frenchman in the seventh game.

Even slipping over, mid-rally in the ninth game seemed only to inject more brilliance into the Gulbis racket and he broke again to level the match, 6-3.

Now the alarm bells started to ring: Tsonga called the trainer and had his left knee bound up for the third set. He seemed to be moving well, but Gulbis was playing at such a high level, retrieving well, serving even better, that Tsonga could not break through. The Latvian broke in the fourth game and held his advantage to take another 6-3 set.

And what had started as a glittering day for the French was suddenly snuffed out as Tsonga, like five players before him on this Wednesday afternoon, retired from the competition.

Wimbledon would, then, have to wait until the next day, and the completion of the top half of the second-round, to find out whether France had equalled or broken its record via No9 seed Richard Gasquet, No28 Jeremy Chardy, and the unseeded Paul-Henri Mathieu and Michael Llodra.

But what it did mean, from the British perspective, was another major seed out of the path of Andy Murray. Tsonga was lined up to be his quarter-final opponent while Rafael Nadal, at the top of his half, had been a potential semi-final opponent.

As Murray advanced to the third round, he would wait to see whether the flamboyant Ukrainian, Sergiy Stakhovsky, could remove the man who deprived him of the title in last year’s final, Federer—and he was certainly having a very good attempt.