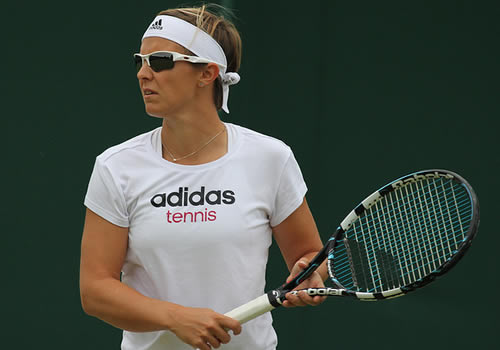 If there was one name that might have been unfamiliar to the Wimbledon faithful in the women’s quarter-final line-up, it was likely to be that of 27-year-old Kirsten Flipkens from Belgium.

She was proving to be the latest in a line of late bloomers, the WTA’s newest member of the top 20, into her first ever Grand Slam quarter-final after reaching his first Grand Slam fourth round in Australia this year.

She did not even play Wimbledon last year, ranked just 175 after serious injuries during the first part of 2012. But since then, she had won her first title in Quebec City and reached the finals of this year’s ‘s-Hertogenbosch. So her grass credentials were strong, especially as she was also the junior Wimbledon winner in 2003.

More impressive still, Flipkens had yet to drop a set in the tournament—but she had also yet to face a seed, and in No8 seed Petra Kvitova, the champion here in 2011, she faced one of the best.

Kvitova was playing her fourth straight Wimbledon quarter-final, having been a semi-finalist in 2010—falling to Williams—and taking the title in 2011 before falling again to Williams in the quarters last year.

Nevertheless, the woman from Belgium had beaten Kvitova not once but twice in their three meetings, most recently in three sets in Miami this year. And she had the not inconsiderable support and encouragement of multiple Grand Slam winning Belgian, Kim Clijsters, who tweeted the world throughout the match.

Flipkens and Kvitova certainly cut contrasting figures as they walked onto court, the left-handed Czech a tall and rangy 6ft while her right-handed Belgian opponent, just 5ft 5in, is one of the very few players on tour to wear glasses—striking white-framed ones at that—and with cropped hair wrapped by a bandana.

But when they began playing, there were plenty of similarities that showed just why they excel on grass: Big serves, big forehands, first-strike tactics and a determination to dominate from the start of every point. It was a thrilling sight, with old-fashioned, fast-pace, one-two tennis.

Rallies were certainly short but drew grasps at every turn, not least for the bullet-sharp returns of serve each managed to play. And that brought some early breaks of serve, first Kvitova took the advantage in the fifth, then Flipkens hit back in the sixth, only for Kvitova to pounce again in the seventh.

The Czech opened up a 5-3 lead, but then found herself in a prolonged battle to serve out the set, facing five deuces and break points before she sealed the set 6-4. Kvitova had hit 20 winners in the 41 points she won, but although Flipkens had made just six outright winners, she had also made only one error.

It was a trend that continued in the second set, a no-holds-barred bombardment from both women, each racing into the net at the first chance to finish points quickly—but the more compact Flipkens was the more natural volleyer and brought up break point in the sixth game, then forced an error to take a 4-2 lead.

Flipkens next held to 15—she dropped only six points on serve in the set—and though it was the Belgian who had heavy supports on her knee, it was Kvitova who called a doctor to the court at the change of ends, not for injury but for illness. They took her temperature, discussed fluids, and she carried on.

But she could not hold back the rampant Flipkens, who served out the set with ease, 6-3.

Now Kvitova went off court, eventually returning swathed in towels, though the court was under a closed roof. But she looked in good shape to hold her serve through to 4-4. She even had the chance to break Flipkens in the fourth, but the Belgian saved it with a courageous reached volley put-away and then made a wonderful drop winner from the baseline—a tactic that would appear with greater frequency.

Come the vital ninth game, Flipkens struck and broke: She had the chance for the win of her career, and deployed those drop shots again, reaching 40-0 with an ace. Kvitova fired backhand winners off the next two serves, but Flipkens had one more ace up her sleeve to take set and match, 6-4.

It was her best set of the match, boasting 11 winners to, again, only one error, and she was thrilled: “It cannot be better…I’m so happy I still have to wake up: It’s more than a dream!”

And she ended by thanking her famous Belgian colleague: “I have to thank here for believing in me [through all the injuries], one of a handful who did.”

She next plays Marion Bartoli whose match, despite an extended rain delay on Court 1, reached its climax just before Flipkens sealed her place in the semis.

The No15 seed, in her third Wimbledon quarter-final, took a 52-minute first set against No 17 seed Sloane Stephens, who was playing in the main draw for only the second time. The 20-year-old American broke into the top 20 this year after reaching the semis of the Australian Open, but had not played a seed before Bartoli.

It looked as though the experienced French woman was sailing to victory in the second set, twice breaking to lead, but Stephens broke back as Bartoli served for the match.

However, Bartoli refocused, held her next serve and broke a nervy Stephens to love for the set and match, 7-5.

Bartoli and Flipkens, though similar in age, have never met before—which will make one of the most unexpected semis in recent Wimbledon years also one of the most fascinating.