Wimbledon 2013: Martina Navratilova believes that the Grand Slams will eventually switch to three-set matches for men 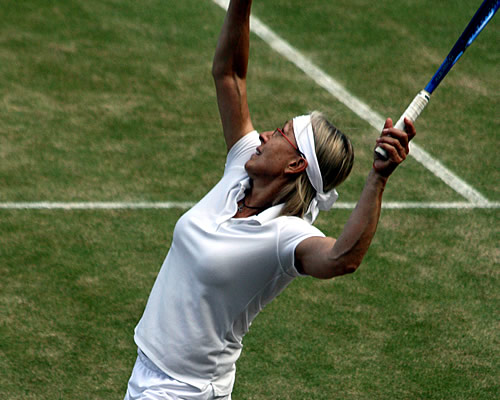 Martina Navratilova’s name is, when it comes to Wimbledon, everywhere.

It starts with the lists of Open era Grand Slam singles champions. Navratilova shares second spot with the other half of a great rivalry, Chris Evert: 18 apiece. It is their record that Roger Federer hopes to equal next week.

Navratilova also, incidentally, has 31 women’s doubles and 10 mixed doubles title at Majors. No less a tennis icon than Billie Jean King has called her “the greatest singles, doubles and mixed doubles player who’s ever live.”

What Federer is still some way from reaching is Navratilova’s singles record at Wimbledon, where she has nine from 12 finals.

So when Navratilova puts in an appearance, it is always worth paying attention, and she is doing just that this week at Wimbledon, reviving her long and fruitful doubles partnership with Pam Shriver in the Ladies’ Invitation Doubles tournament—one of the treats in the second week of the tournament.

Although Navratilova won Grand Slam doubles titles in her prime with both King and Evert, she won 20 with Shriver, the first of them at Wimbledon in 1981.

But Navratilova is also woman of strong opinions, and devotes much time and energy to many charitable and human rights campaigns. One of them is the Laureus World Sports Academy, and in an interview with Laureus this week, she predicts that Wimbledon and the other Grand Slams will switch to three-set matches for men in the future—or tennis could see more injuries to the top men’s players.

“It’s really becoming so taxing that I believe one day we will have two out of three sets in the Grand Slams, otherwise they’re going to be taking people out on stretchers.”

Navratilova went on to say that the injuries to the big name players this year—such as Rafael Nadal and Andy Murray—have highlighted her growing concern.

“We have always had issues with injuries, but this year it came to light more so when the top guys are hurt. Nadal’s had issues, he was out for about eight months. Now Andy Murray has missed the French Open because of a bad back and Novak Djokovic had issues as well with his ankle.”

She highlighted several reasons for her concern.

“Number one, we’re playing on hard surfaces most of the year, not clay. We used to play with wood and gut, now they play with metal or some kind of synthetic racket. They put a lot more hours in and everybody hits the ball harder, you have to run harder. Plus the courts are slower so the rallies take longer. This has to take its toll on the body.

“You play a long match and it takes you months to recover, because it’s like running a marathon in sprints, but then sometimes you have to go out and play a match the next day or two days later.”

Her solution is for men’s Grand Slam competitions to switch from the best of five sets to the best of three sets, which is the current format for the women. And to those who say tennis cannot tamper with the historic format of Grand Slams, she has an answer.

Martina remained fit during most of her long career, which she concluded by winning the mixed doubles title at the 2006 US Open with Bob Bryan just a month short of her 50th birthday.

“I played a lot of tournaments: I would play probably 17 to 20 tournaments a year and I played singles and doubles. Some Grand Slams I played mixed doubles as well, so I played a lot of tennis. But the matches were shorter for me. I played very aggressive games, so I didn’t have long rallies. But could I do that now? No. I wouldn’t be able to play doubles in all the events.”

Her comments will add fuel to on-going complaints from the men’s tour—with Nadal one of the most vocal—that the annual calendar, the move to a majority of hard courts, allied to the dominance of the baseline game, is causing long-term damage to the players.

Federer has rued the trend, too, but rather because of the lack of variety it has brought to the game. He talked only this weekend of having to adapt his own game since the year he first won at Wimbledon 10 years ago: Then, he served-and-volleyed through much the tournament.

“I regret [the slowing of the court] more across the board at many tournaments. It’s not just here. It’s happened all around. I also believe playing styles have changed in the process. But they were, anyway, about to change. There were more and more baseliners in the game 10 or 15 years ago I thought than ever before.

“And then the tournaments started slowing down conditions, as well, significantly. Then that really doesn’t give you a big incentive to move forward anymore. It becomes a bit more predictable.

“I think it’s a bit of a pity, yes, because I think it would be nice to see more players out of their comfort zone more often, as well. Now you can just play the same game on clay, on grass, on hard courts. That was not really the idea about having different surfaces in the first place.”

He was asked, in particular, about attempting to shorten matches with a fifth-set tie-break.

“Only the US Open has a fifth-set tiebreak at the moment. I’m not sure if that’s what I like, to be honest. I quite like the long-set situation.

“But then, of course, you have the Isner/Mahut match, and then you’re like, it isn’t such a good idea. It then jeopardizes your chances to win the title. It’s a big debate, you know. I guess a tiebreak is like a bit of penalty shootout in soccer for us. You know, anything can happen. I don’t want to say necessarily the worst or the better player wins, but it’s sort of a bit open. That’s why the long set is a good idea sometimes.”

He has also said that he would like to see big events such as the World Tour Finals revert to the five-set final it abandoned in 2007.

What does seem clear is that something has to give. Shortening matches at Grand Slams is one solution—by whatever means. But another is to introduce much more variety into the pace of courts to encourage more variety in the game—and perhaps that should begin on the original and the fastest surface of all, Wimbledon.

Wimbledon 2013: Ailing Heather Watson is 7th Brit to fall in 1st round