Wimbledon 2013: World No1 Novak Djokovic refuses to get complacent despite a favourable draw at SW19 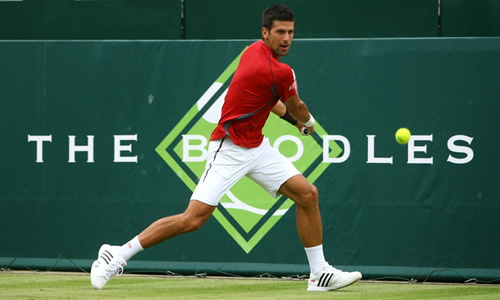 Novak Djokovic in action at The Boodles this week Photo: Jordan Mansfield

Novak Djokovic is anticipating a difficult run to the Wimbledon final despite being handed a favourable draw.

The Serb managed to avoid Rafael Nadal, who fell in the same half of the draw as Roger Federer and Andy Murray, and instead could face a potential semi-final against David Ferrer or Grigor Dimitrov.

However, the 26-year-old world No1 acknowledged there are no easy matches at SW19 – and the six-time Major winner is not about to get complacent despite his apparent slice of luck.

“It is what it is. Some people would say that I was lucky with the draw.

“But it’s a Grand Slam, so I don’t think that there is any easy way to the title or easy way to win because the best players in the world are playing in this tournament, the most valuable, most prestigious tournament in the world.

“Everybody wants to play well, so I’ve got to take it slowly and think only about my next opponent.”

Djokovic will start his bid to win a second Wimbledon title against Florian Mayer, a player who he beat in the quarter-finals at SW19 last year.

“He’s a tricky player. He has a bit of an unorthodox game. He can be very dangerous on this surface. He loves playing on grass,” he added. “If you look at his career, he’s made his best results on grass.

“He’s tall, he can serve well and he can move around the court well. I think it’s a difficult opponent for the first round.”

He concluded: “I’m ready. Every day I’m getting better on the court. I’m proceeding with my program, with my team, and hopefully I can be ready for that match.”