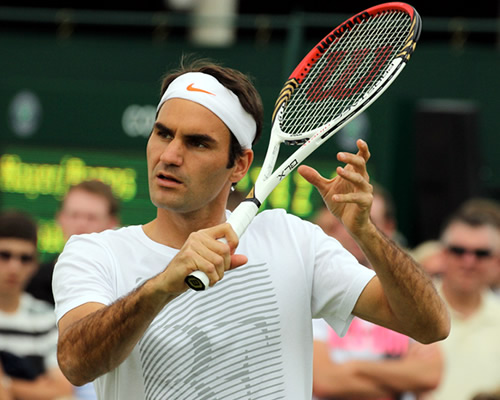 The noise of Centre Court was an aural barometer of the growing shock that gripped not just the All England Club but tennis fans around the world on the third day of Wimbledon 2013.

It all began, as it has many times before, with a standing ovation as defending champion Roger Federer walked onto court.

Many had travelled miles—many hundreds of miles; many had queued and camped for more than 24 hours to guarantee a flat-price ticket; a few had paid a fortune to get their hands on the only other source of a prized Centre Court seat, the debenture; and the vast majority were here to see Federer ply his glorious grass trade against whoever his hapless opponent might be.

By the end of the first set, there was contented cheering after an unexpectedly tight, tense and high quality first set. The lowly ranked man from the Ukraine, Sergiy Stakhovsky, was putting up a great fight, playing some thrilling tennis, was giving Federer a run for his money, but Federer edged the tie-break, took the lead.

Yet this nimble and entertaining Stakhovsky had no intention of backing off. Unlike many other men over the years, he seemed to have a read on the disguise of the Federer serve and was returning with interest and with vim—now with a passing shot down the line, next at the feet of the incoming Swiss.

What’s more, Stakhovsky’s own serve was proving to be just as hot: He faced down a couple of break points in the second set with some big serve winners and as they moved into another tie-break, he led the offensive tennis of Federer by 34 winners to 30.

Such was the style, the speed and the audacity of the shot-making—classic grass tennis of serve and volley, slice and zipping winners—that the sound-track of ooohs and aaahs rose and fell like waves on a beach, and when Stakhovsky levelled in the second set tie-break, the rising buzz must have spread across every court at Wimbledon.

As this unfamiliar face on Centre Court tested Wimbledon’s favourite son to the limit, making the first break of the match at the business end of the third set, the crowds cheered and applauded in encouragement. Here was an audience so entranced by the tennis of the two combatants that the repercussions of the drama unfolding before them seemed not to have fully sunk in.

But as Stakhovsky’s volleys, angled to perfection, punched more holes in Federer’s attack, the roars of “Roger” grew more intense, more frequent. He was broken early, looking down the gun barrel, but retaliated with his only break of the match. The Centre Court roar said it all: Now the champion would make his comeback, now the tennis of Stakhovsky would bow to the pressure.

It did not, and as winner after winner carried the world No116 to a famous victory, the crowd rose as one to applaud a remarkable victory rather than a shock defeat.

Yet as Federer left, they suddenly rose again in ovation—and the gesture was not lost on the former champion when he faced his inquisitors just 15 minutes later.

“Appreciated all the standing ovation and all the ovation I got leaving the court, no doubt about it.”

To this observer—though shell-shocked—it had been a truly memorable match, a contest of such constant high-quality that it left body and soul exhausted. And for those familiar with Stakhovsky, the surprise was not that quality, for he has long been a player of enormous flair, of thrilling serve-and-volley skill, and of great personality. The surprise was his constancy, his unwavering high level of play in the face of a Federer also playing to a high and constant standard.

So it was confusing, even before that prompt press conference, to hear a gathering undertow of doom. Federer loss, the hum said, had brought down the curtain down on years of record-making and record-breaking: His worst and earliest defeat at any event since losing to No154 Mario Ancic in the first round at Wimbledon in 2002; The end of a 36 streak of Grand Slam quarter-finals; his first loss to a player outside the top 100 since Richard Gasquet at Monte Carlo in 2005… and so it continued.

There was talk of ‘anno domini’, of the end of an era, of no more Majors for ‘the great Federer’, and this spectator began to wonder if she had watched the same match, to wonder whether she had mis-remembered former near-exits at this stage in a Grand Slam, indeed on this very stage.

But no: Federer had looked defeat in the eye in the fourth round of the French Open against Tommy Haas in 2009—two sets down and saving a potentially fatal break point with a winner that just clipped the side line.

Federer also escaped, just, in the first round at Wimbledon in 2010, from two sets down and facing a tie-break in the fourth, against Alejandro Falla. Then he dropped a set to the 152-ranked Ilija Bozoljac in the second round.

Even last year, on his way to the title, he almost went out in the third round to Julien Benneteau: two sets to love down and edging, just, a fourth-set tiebreaker. On that occasion, Benneteau developed a leg problem in the latter stages. On this occasion, Stakhovsky developed no problems, indeed made few errors at all—17 of them in a match of 323 points.

A couple more mistakes, a couple fewer winners—from an astonishing 72 of them—and the match could as easily have ended differently. As it was, Stakhovsky won by a single point, 162 to 161.

Perhaps Federer could have eliminated some errors—but then he made only 13. Perhaps he could have played more aggressively, more boldly—but then he hit 57 winners, made 16 aces, won 35 points from 54 net approaches.

So far from Federer ‘looking his age’, showing signs of decline, being on a slippery slope, this was a time for giving credit to a superlative opponent who did not blink.

As Stakhovsky freely admitted: “You can’t really keep up with Roger on grass on baseline rallies. It’s just impossible, I would say, especially here. He’s playing very well. He feels the grass. He feels the slice. He can do whatever he wants with the ball. The only tactics I have are press as hard as I can on my serve and come in as much as I can. I think today I was successful enough that he didn’t get into the returning rhythm, only somewhere in the middle of the fourth set. So I was lucky, I would say, to pull it out in the fourth and finish it.”

Federer was also quick to react to the ‘the end of an era’ question:

“No, because I still have plans to play for many more years to come. It’s normal that after all of a sudden losing early after being in the quarters 36 times, people feel it’s different. You guys hyped it up so much, me playing Rafa, and we’re both out. So there’s a letdown clearly.

“Maybe it’s also somewhat a bit disrespectful to the other opponents who are in the draw still. I think it sends a message to you guys as well that maybe you shouldn’t do that so often next time around.”

Then is was suggested his fans would mourn the end of his 36 quarter run:

“I guess it’s a great number: I’m very happy about it. I wish it wasn’t going to end here today. But I don’t think that’s something fans are going to mourn about or myself. It’s a great number—I can be proud of it. But moving on from here.”

So, as usual, he intends to regroup and return:

“Well, what do you do after something like this? You don’t panic at this point, that’s clear. Just go back to work and come back stronger really. Somewhat simple, but hard to do sometimes. But usually I do turnarounds pretty good. I’m looking forward to what’s to come, you know. I hope I can play a good summer, a good end to the season. This is clearly not what I was hoping for here today at this tournament. Unfortunately it does happen. Looking forward to next year, that I can do better next year.”

And along the way, he will have more close shaves, more unexpected losses, more pleasing wins—and sometimes another player will fire up in the face of the ultimate challenge: Just ask Rafael Nadal about Lukas Rosol.

And on those days, give credit where credit’s due. Federer played a quality second-round match—but Stakhovsky played a remarkable one.