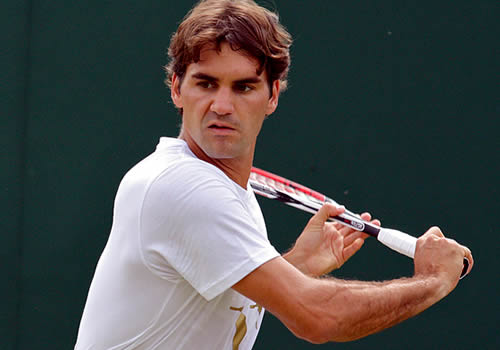 When it comes to Roger Federer, Wimbledon is special.

He loves its traditions, its knowledgeable crowd, the respectful hush of its packed Centre Court, and the words of Kipling over that door.

Above all, he loves its grass, an affection that is played out most eloquently through his career at the All England Club.

Fifteen years ago, Federer received his first trophy on the famed Centre Court. In fact, the 16-year-old picked up two trophies: the junior singles and doubles titles.

Just three years later, he was back on the same stage with, as he put it in an interview this week with BBC Radio 5 Live, “the men”.

“Just being able to play the boys junior Wimbledon was a huge deal,” he says. “You came in the second week, you’re watching the greats warm up—it honestly was quite inspiring for me to see these great players.”

The great players that year, as he rightly remembered, were Goran Ivanisevic and Pete Sampras… and it sewed the seeds in the Swiss teenager’s head of what might come: “When I won [the junior title], that’s when the dream became bigger, to maybe one day win with the men. As we know, I was able to do that, too.”

His first two forays with “the men” at Wimbledon, in 1999 and 2000, saw him exit in the first round, but also showed his promise. In the first, he took the 59-ranked Jiri Novak to five sets and in the second, he pushed No5 seed Yevgeny Kafelnikov through three tough sets, 5-7, 5-7, 6-7.

But a dozen years ago, in 2001, chance determined that Federer would face one of those men he admired from afar in 1998, Sampras. It was the match that truly announced Federer’s arrival not just at Wimbledon but in the consciousness of tennis fans around the world.

For the first time, he arrived at the All England Club with a senior title to his name, in Milan, having also reached the final of Rotterdam and, more pertinently, his first Grand Slam quarter-final at Roland Garros.

Federer, who would not turn 20 for another six weeks, still looked very much the slender teenager he was: Oversize, baggy whites, a thick, unruly ponytail, stubble around the chin.

Nevertheless, the essentials were firmly in place. He already possessed the brilliant forehand that could pierce down-the-line defences or angle past a net-bound opponent with assorted spins and disguise. Just like the serve-and-volley players he so admired form the previous decade, he boasted an elegant and flexible single-handed backhand, impressive serving skills, as well as touch and timing around the net. And with footwork and movement to die for, as well as a desire to play all-court offensive tactics, he was designed for Wimbledon success.

So when he worked his way through the 2001 Wimbledon draw for a first—and what would be his only—meeting with the seven-time and defending champion Sampras, the world sat up. And when their fourth-round match unfolded through five long sets and almost four hours, the writing was on the wall for the current champion. The teenager won, 7-6, 5-7, 6-4, 6-7, 7-5, and Sampras would win only one more match at Wimbledon, losing in the second round in 2002 never to return.

But the hype surrounding Federer, and the expectation that he would now go on to win his first Slam, proved quite a burden, and perhaps the reason he failed to get beyond the fourth round at a Slam for two full years. Indeed he lost in the first rounds of both the French Open and Wimbledon in 2002.

He talked at length about the weight of expectation.

“It was interesting because in Switzerland we had Martina Hingis just before I came along, and she was obviously this phenomenon at 16, 17 and 18, just winning everything… and I think we got used to it, plus I had this incredible talent people were talking about. It was quite challenging for me. And then I had to keep my mental side in check as well, try to stay strong, and physically keep on improving, because I knew I wasn’t there yet.”

Since then, of course, the trend has been away from very young champions—only one man, Rafael Nadal, and one woman, Svetlana Kuznetsova, has won a Major as a teenager since Federer claimed his first Grand Slam at Wimbledon. So his recollection of the pressure he felt may well resonate with many of today’s players.

“I just needed more time to become stronger, and I think in particular the win over Sampras at Wimbledon in 2001 really gave many people the belief that I should or could win a Grand Slam—and it should be Wimbledon.

“Look, I also faced a lot of pressure, a lot of criticism. People were starting to debate if I was ever going to win one. At the moment, it was very difficult to deal with. People comparing me to Pete Sampras, and he won 60-something titles and I had maybe barely five…basically that’s not fair, I don’t think. It was hard to accept, even though actually it was a compliment, in one way, it was also huge pressure on the other side.

“So I came into Wimbledon with a lot of pressure, having lost in the 1st round the year before against [Mario] Ancic. I knew that I better make at least the quarter-finals or maybe my first semi-finals at a Grand Slam.

“Then I played that amazing match against [Andy] Roddick in the semis: He had won Queen’s the week earlier, I won Halle. So I’m actually the favourite against Mark Philippoussis.

“I felt extremely confident and strong. I can’t believe it’s been 10 years, but what a magical run it was. Because it wasn’t straightforward—I had a back issue during the tournament, and it was very complicated, but I made it, and it was a dream come true for me.”

He was still only 21, still sported the baggy shirt, pony-tail and a broad unshaven smile that crumpled quickly into tears.

In the three years from 2006 to 2008, he faced Nadal, the Spaniard bringing to an end Federer’s five-year run as champion in the last of them.

However, as Federer prepares for the defence of the seventh title, won against the home nation’s Andy Murray, it is Sampras’s name that again comes to the fore. He and Federer are currently level with seven Wimbledon titles apiece, which means another Federer title this year gives the Swiss a record eighth—a decade after his first.

He recognises the moment as he approaches his 15th consecutive Wimbledon and his 74th match, which he will, as defending champion, play on Centre Court.

“With Wimbledon alone, you could write a book…there alone I have an amazing career. For me, it’s been so much better than I thought it would be. I always hoped one day to be playing at Wimbledon, like my heroes [Stefan] Edberg, Sampras and [Boris] Becker. And here I am talking about my 10-year anniversary already.

“You have to appreciate [the wins], take time to enjoy, like I did last year. I had the chance to go on vacation, and while on vacation, I beat that unbelievable record of weeks at No1.

“And having won being a dad, having won as a junior coming up, there are so many little bits and pieces that made every victory at Wimbledon so, so special. And the support team, my parents, everyone who’s been so supportive—I don’t know how I can ever thank them. I hope I’ll get that opportunity one day.”

But on the 15th anniversary of his junior title, the 12th of that game-changing win over Sampras, and the 10th of his first title, it seems appropriate only to reverse those opening words: When it comes to Wimbledon, Roger Federer is special.