Wimbledon 2013: Tim Henman says Andy Murray is doing a good job of handling the pressure that comes with playing at SW19 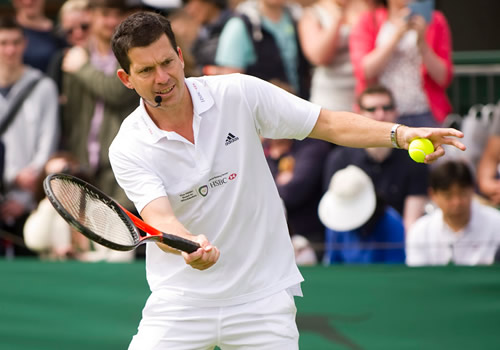 Twelve years have passed since Tim Henman had his best chance to win Wimbledon and we all know what happened then.

Against wildcard Goran Ivanisevic, he came from a set down to seize a winning position, only for the rain to intervene in a semi-final spread over three overcast and ultimately downbeat days.

Passing time allows Henman to afford a wry smile when told that the stars are now similarly aligning for Andy Murray, after a week of upsets at the All England Club.

But he knows to his eternal cost what can happen if you try to write a prematurely happy ending… it usually ends in tears.

“I’m not a great believer in fate,” said Henman, speaking on behalf of HSBC, the official Banking Partner to The Championships, Wimbledon, the world’s most famous tennis tournament.

“Only you are responsible for your actions and I never really got caught up by what was happening around me.

“I think Andy has been pretty level-headed about this week. Of course, with all the upsets, it’s going to increase the expectation but he’s doing a great job of staying focused on the job.

“In some ways, Rafa and Roger going out doesn’t really make a big difference. Andy is the second seed, which, on paper, means he should make the final anyway. However, not having to play them isn’t a bad thing.”

Perhaps only Henman can empathise with Murray in the days ahead. After all, he invented Henmania and, while Murraymania doesn’t have quite the poetry, the symptoms are the same, perhaps even more acute.

“Watching now, I think I’m much more aware of the pressure that would have been on me than I was at the time,” added Henman.

“I did a very good job of not reading any newspapers during Wimbledon, not listening to the radio and not paying attention to anything anyone was saying.

“My parents saved all the Wimbledon newspapers each year and I used to spend 30 minutes reading them at Christmas.

“I remember thinking that if I’d known what was being written, or knew about all the expectation, then playing tennis would have been virtually impossible.

“It’s hard to ignore when you are a home player but you have to do it.

“In some ways, I think I made it a little easier for Andy. When I was playing, there hadn’t been a home contender for such a long time. When Andy was growing up and starting playing here, then he was able to see what I was going through and maybe that helped.”

Henman took time out from his commentary and All England Club duties yesterday to put some of the next generation of British players through their paces as part of the HSBC Road to Wimbledon, a grass roots tournament which starts with 20,000 players nationwide and concludes with final matches on SW19’s manicured lawns.

While Murray and Laura Robson have enjoyed solid campaigns – it’s the first time since 1998 that there are still British players involved in Wimbledon’s fourth round – others did not enjoy a week to remember.

The eight remaining British singles players all lost their first round matches and won just one set between them.

Some later grumbled that too often their entire seasons were judged on their performance here, no matter what they achieve elsewhere, but Henman has no time for that argument.

“It’s just a massive opportunity for a British player and we are lucky to have Wimbledon as our home tournament and it’s an asset not a burden,” he added.

“It’s a great carrot. It should inspire you competing here. It inspired me as a six-year old watching Bjorn Borg and when I read that we had the best tournament in the world but no players to compete in it, it made me more determined.”

Murray will take on Mikhail Youzhny in Monday’s fourth round after he came through in straight sets 6-3, 6-4, 7-5 against Viktor Troicki. The second seed has won both his previous matches against the Russian, who is ranked 26th in the world, though their last encounter was four years ago.

After three straightforward and straight-set wins, some have questioned whether Murray will require a tougher match before the tournament reaches its conclusion, but Henman insists he won’t be bothered.

“He’s been tested at points of all his matches and he’s come through well,” he added.

“I don’t think having a really tough five-setter is going to help him. He’ll be very happy with progress like this throughout the tournament.

“He’s a better player than ever but, while it’s his best chance, he knows nothing can be taken for granted.

“Andy can win because he got so close last year and his grass-court record is fantastic. I’d still say that Novak Djokovic is a very slight favourite to win but I think that Andy’s a very close second favourite.”

Tim Henman is an Ambassador for HSBC, sponsor of the HSBC Road to Wimbledon National 14 & Under Challenge, the UK’s largest national junior grass court tournament.