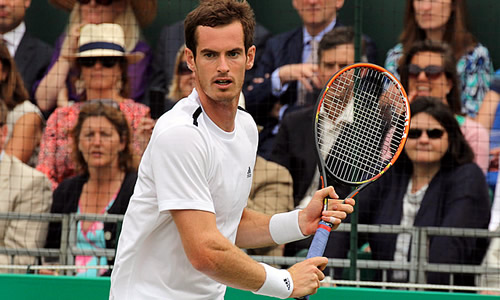 Andy Murray is through to the last eight at SW19 Photo: Marianne Bevis

Things were, thus far, working out quite nicely for Novak Djokovic and Andy Murray, both former Wimbledon champions, friends and rivals born within a week of each other, the two men who had contested this very title last year.

Top seed Djokovic and No3 seed and defending champion Murray would, if all continued along the present road, meet one round earlier this year, in the semis, for Murray had gone on to slip in the rankings after undergoing back surgery last autumn, while Djokovic went on a title-winning splurge towards the end-of-year World Tour Finals.

Both had seen the highest seeded opponents in their quarters fall by the wayside: Djokovic would not face No6 Tomas Berdych and Murray would not face No7 David Ferrer, but both would nevertheless face two very challenging opponents even to reach the quarter-finals.

First up was Murray, who entered an overcast and cool Centre Court to his usual standing ovation, along with the No20 seed Kevin Anderson, one of the late-bloomers on the men’s tour.

The tall, big-serving South African stood at a career-high ranking and was bidding to reach the quarters of a Grand Slam for the first time in 22 appearances—and lest that seem a modest achievement, this was now his fifth fourth-round run in his last seven. What’s more he had so far beaten two top-five players in Ferrer and Stan Wawrinka this year.

But Murray, well he had looked truly impressive in dropping just 19 games to win his first three matches, his fewest ever at Wimbledon. He sounded confident, he looked fast and fit, and was favourite to reach the quarters for a seventh consecutive time and extend his 16-match winning streak at the All England Club—for he is not just Wimbledon champion but Olympic champion.

And he started with intent. Murray took four straight points from four first serves and then broke Anderson to a roared “C’mon”.

He fought off a deuce in the fourth game with an ace, and played the silkiest of cross-court winners in the next, showing his touch and movement were not too affected by the chill conditions.

He could not convert another break chance in the seventh, despite a top-drawer return-of-serve winner that had the crowd gasping, nor could he take advantage of a deep forehand sliced to the back corner in the ninth, but he took the first set with little trouble, 6-4, with 15 winners to only three errors.

Anderson must have wondered what he could do to stem the tide at the start of the second set, as he fended off break point after break point—seven of them—with Murray playing every shot in the book. Sure enough, the Briton broke, and did so again in the third, pulling off a reflex winner from his midriff for a break point that must have drained the South African’s spirit still more.

But at 0-3, the rains came: The roof came on and, half an hour later, Anderson returned to the fray, full of fight. He broke back and defended another threat to his serve to for 2-3, but he was on a hiding to nothing and Murray broke to take the set, 6-3.

Anderson played, if anything, even better in the third and offered up not a single break point. He, like Murray, made few unforced errors—either in this set or the others—and he showed remarkable fight to fend off no fewer than five break points at 3-4. But he resisted, took the set to a tie-break, and even there, kept hold of Murray’s coat-tails through some lovely rallies until 6-6.

But Murray needed just two great points to force the two decisive errors, and he was through to his seventh straight Wimbledon quarter-final.

Anderson had played bold and attacking tennis—34 out of 53 points won at the net, and twice the winners to errors—but Murray is currently irrepressible. He made only 12 unforced errors in the match to put out a class player.

He will have to lift his level yet again when he faces one of the most talented young stars on the tour, No11 seed Grigor Dimitrov, who put out Leonardo Mayer through very tricky cold and damp conditions, 6-4, 7-6, 6-2.

The popular, elegant Dimitrov, a former junior champion here, reached his first Major quarter-final at the Australian Open in January, and has since won three titles, including the prestigious grass event at Queen’s. And while Murray has a 3-1 record over Dimitrov, it was the Bulgarian who won their most recent contest in the Acapulco semis this year.

If Sharapova vs Bouchard in the women’s draw makes the mouth water, the equivalent Murray vs Dimitrov will be surely even more eagerly anticipated.

Djokovic took on the No14 seed Jo-Wilfried Tsonga for an 18th time, and the good news for Tsonga was that he had reached the semis here before, beaten in a close four-setter by Djokovic in 2011 and then by Murray the next year.

The bad news was that Djokovic had won their previous 10 matches and was aiming to reach his 21st consecutive Grand Slam quarter-final.

And the difference in their current form showed immediately, with Djokovic taking a two-set lead over Tsonga within the first hour. The Serb wrapped up the match 6-3 6-4 7-6 (7-5).

With most remaining matches on ‘Manic Monday’ cancelled, it proved to be an early end a rain-blasted day. Marin Cilic, who awaits Djokovic in the quarters, will count himself lucky to have finished business at the start of the day, beating Jeremy Chardy, 7-6, 6-4, 6-4.